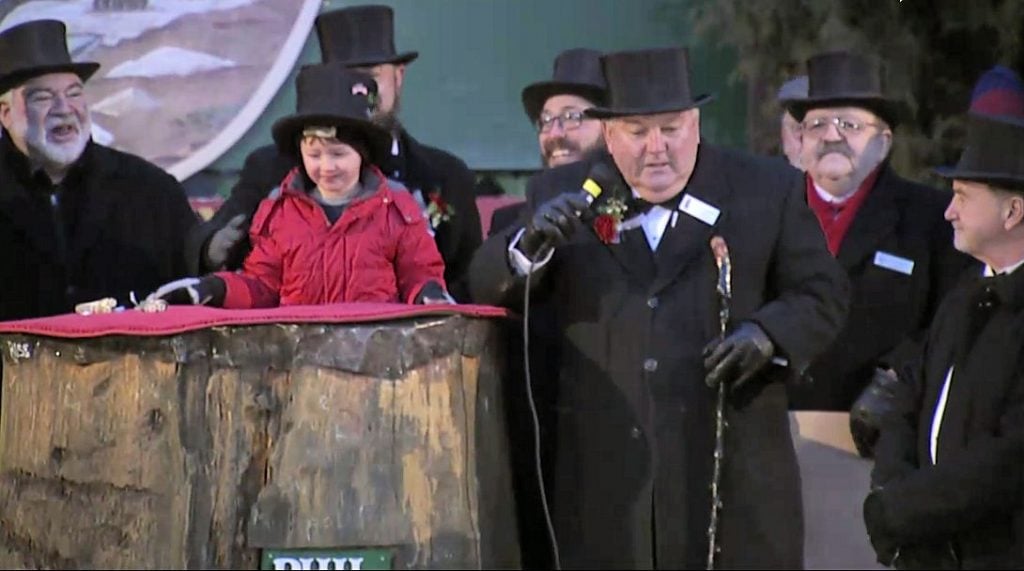 Ummm…we haven’t HAD six weeks of winter yet, have we? It’s cold, it’s mild, it’s cold, it’s mild. MOST of the ski areas NOT located in West Virginia have had more mild than cold temps thus far this winter. Even into WV and Maryland things have been less than winter-like to say it “mildly” <- see what I did there?

Regardless, we are now at about the unofficial half-way point in the season. The Christmas-to-New-Year Holiday ski week came and went. We’ve raced past the long, MLK weekend and we have now arrived at Groundhog Day. That always send a chill down my back because on this date it always occurs to me that for a lot of people the PERCEPTION is that the ski and snowboarding season is winding down.

Nothing is further from the truth as TYPICALLY we get more of our deeper snows and cold temps in February and March than we do earlier in the season. Of course so far we’ve been somewhat snow and cold starved compared to normal. Of course saying that – Kenny Griffin is updating his Groundhog Day FirsTrax report and no doubt sharing the fact that places like Canaan Valley, Timberline, and Snowshoe have seen NOTHING BUT SNOW for the last seven days in a row. Canaan Valley’s David Lesher is reporting ANOTHER 9.1″ of snow overnight and a whopping 28.7″ of snow in just the last seven days.

Meanwhile here in the mountains of North Carolina, we are enjoying Springlike 50 degree temps. Yesterday I had to open the windows in my office because it was 78° in my office.

THANKFULLY we’re looking at colder temps for Friday and Saturday across the entire region that will allow every resort to make snow. However, the temps are looking to mild-up again going into early next week.

That brings me to today’s Groundhog Day News…

I just KNEW that Puxsutawney Phil would be sharing an “early Spring” prediction. However, I woke up early this morning and tuned in LIVE to watch the festivities. I am a fan of all festivals of any kind and I’ve been a huge fan of Groundhog Day for the same reason that I like the Woolly Worm Festival. They both share information that skiers and snowboarders find interesting or important to us.

As big a fan as I have always been of Groundhog Day, the movie, the day itself – I have never watched the actually event itself. However on this particular Groundhog Day I woke early with intentions to watch the entire “thing”. Of course, I thought I was going to see a big crowd, some old farts aggravating a rodent and then share the “news”. However, this thing was truly an “event”.

Things started off with a few, top-hat-dressed spokespeople coming on stage and welcoming the crowd. Temps hovered at around 27 degrees and it was snowing lightly. Minutes later we were introduced to some musicians who were pretty talented. A Groundhog Day band come on and did a couple of numbers and then to my surprise (and delight as a diehard Gamecock fan) they played the 2001 Space Odyssey theme and followed it with the Star Wars theme. 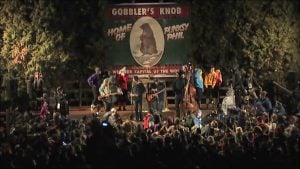 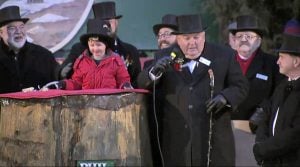 They’re about to bring out Phil! Click to Enlarge

Next came various introductions and the news that one of the inner circle had recently passed away and in his place were various members of his family. They took the stage and without too much fanfare, one of the gentlemen pulled out a set of keys, bent down and opened the locked doors of Phils tree-stump-house and then two men bent down and struggled mightily to pull Phil from his confines. (They were wearing HEAVY, steel-reinforced gloves).

Next came the odd “speaking with the rodent” part of the process. Evidently only the President (Bill Deeley) can speak Groundhogease and only when he holds this magical cane made of acacia wood – the very same wood that Noah’s Ark was made out of. 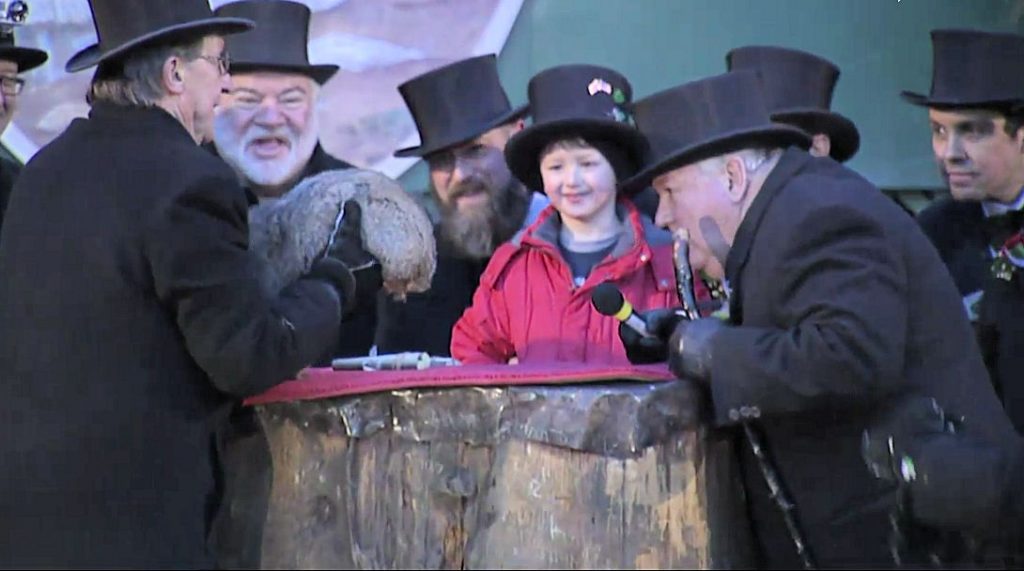 Yes he was really talking with the rodent. Click to enlarge.

So he leaned across the stump, chatted a bit (in English) and then declared he knew what Phil had shared. With that news, he grabbed one of two scrolls that were on top of the stump-house and then Vice-President, Jeff Lundy read the scroll, which revealed the following:

Now, this Second Day of February, Two Thousand and Seventeen, the One Hundred and Thirty First  Annual Trek of the Punxsutawney Groundhog Club….

Punxsutawney Phil, the Seer of Seers, Prognosticator of All Prognosticators, was awakened from his burrow to the cheers of his thousands of faithful followers….

In Groundhogese, he directed the President and the Inner Circle to his prediction Scroll, which reads:

At Gobbler’s Knob on Groundhog Day
We celebrate a world-wide Holiday
It’s mighty cold weather, you’ve been braving
Is it more winter or is it spring that you’re craving?
Since you’ve been up all night and starting to tottle
I, Punxsutawney Phil, shall not dawdle
My faithful followers, I could clearly see
A beautiful, perfect shadow of me
Six more Weeks of Winter, it shall be!

Well there you have it. Six “more” weeks of winter. That gives all skiers and snowboarders hope that maybe – just maybe – we will HAVE a few weeks of winter. Right NOW I’d take anything CLOSE to the kind of temps and snow that the West Virginia ski areas are seeing and have see so far this winter.

Snowshoe has seen 64″ of snow so far and the Canaan Valley area 80″ thanks to the 28″ of snow in the last freaking WEEK! Awesome for them – but we can hold out some hold that with six more weeks of winter on the way that the rest of us will see at least SOME significant snowfall and cold temps.

By the way, as a reference point, Beech Mountain’s 25.3″ is the most outside of the West Virginia and Maryland (46″) ski areas.

Here are some additional images: 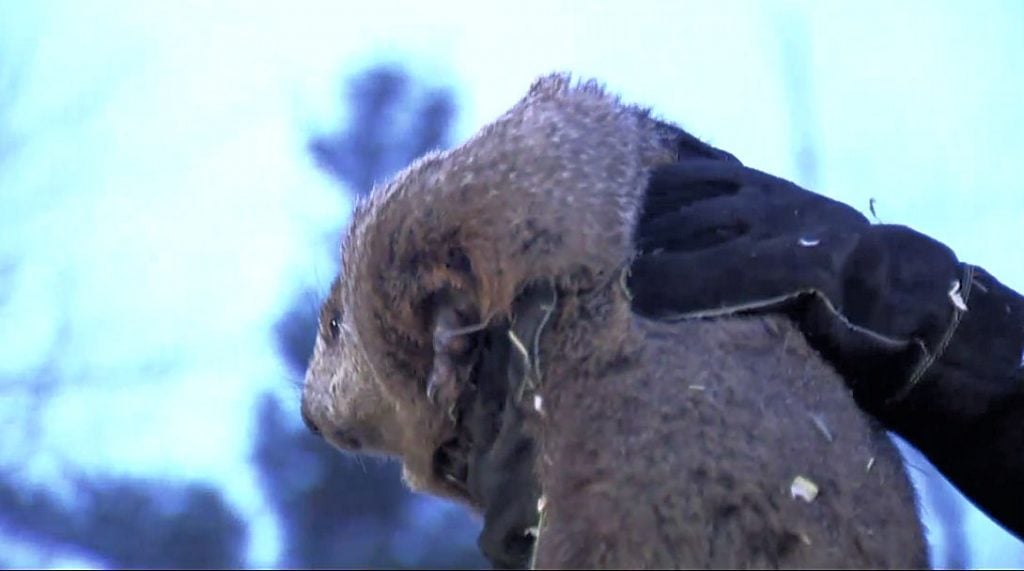 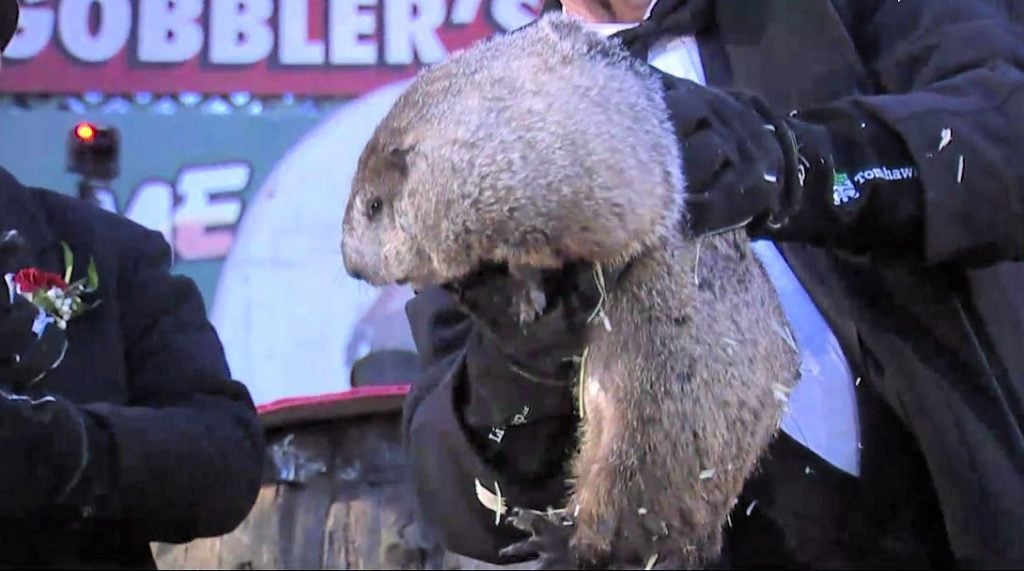 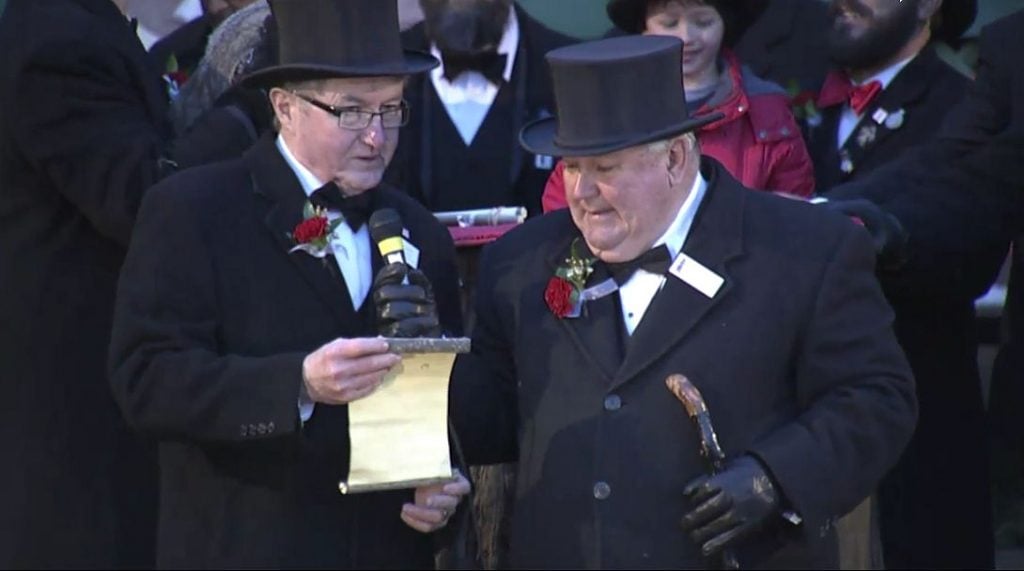 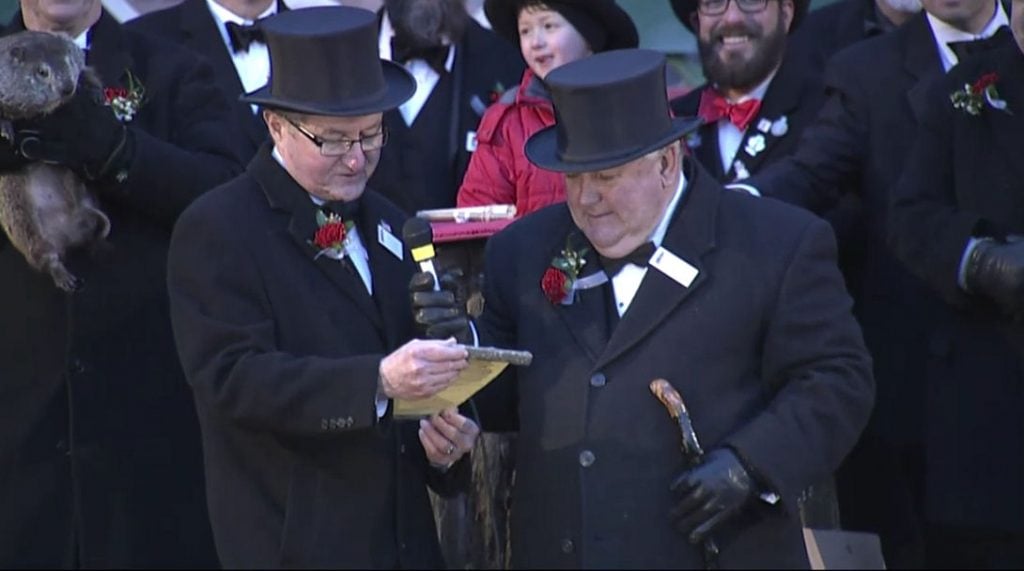 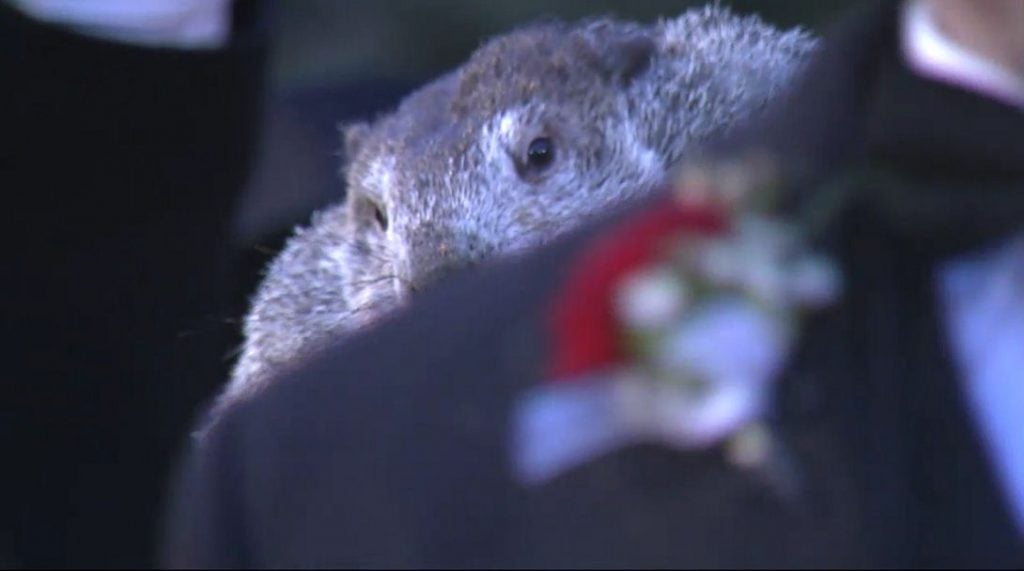 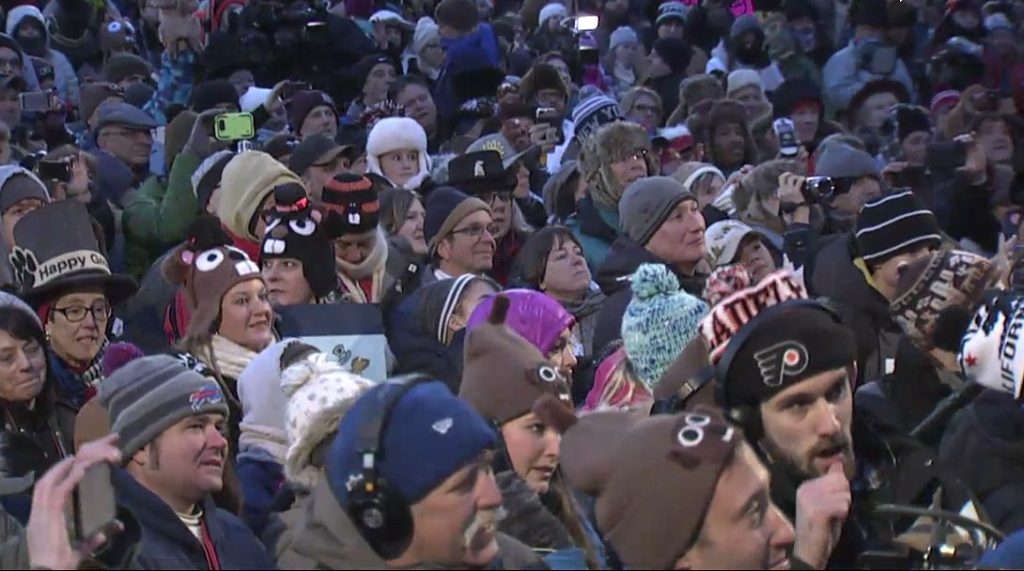 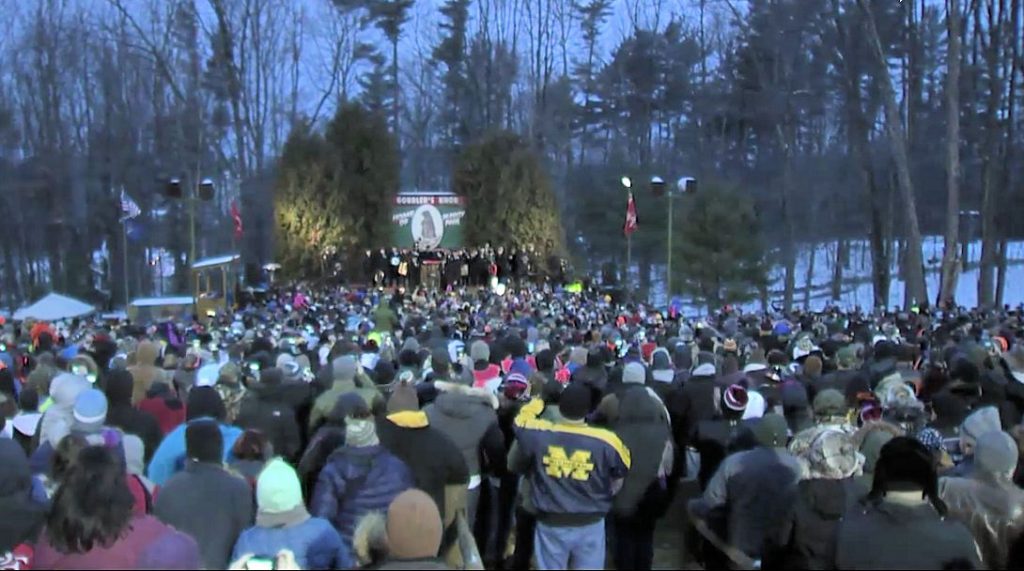 Previous Post
Nine Inches of Snow for Canaan and Timberline, Snowmaking Resumes Tonight for Everyone
Next Post
Another Good Looking Ski Weekend With Snow and Cold