PULLING THE TRIGGER AT THE RIGHT TIME – by Joe Stevens 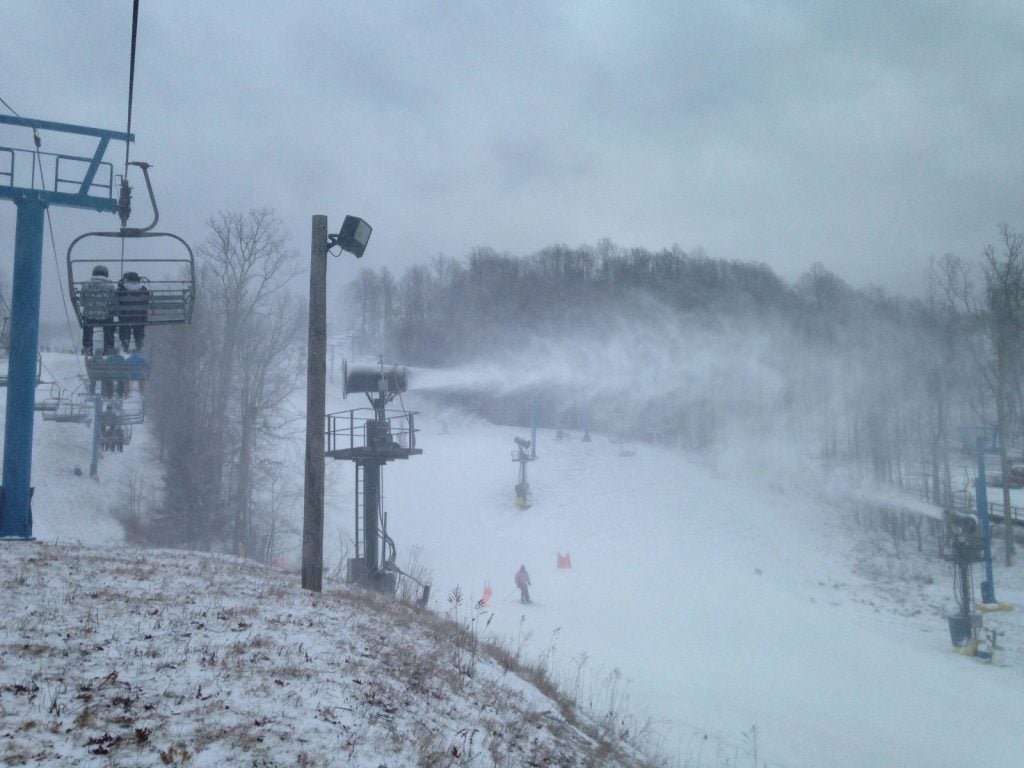 Have you ever prepared to get a task done, whatever it may be, from doing the dishes to buying a house (I know those are two wide apart extremes but that’s what first popped up in my head) and the hardest thing about the task was just pulling the trigger.  Then there are the times when you must get a task started and you couldn’t wait to get started.  I know without a doubt that was the case for snowmakers across the southeast region late last week.

After a nearly two-week thaw, when temperatures for the most part didn’t even allow overnight grooming to take place, every snowmaker worth his or her salt, was itching to get the guns going again, to get the slopes and trails back in shape again.  For the resorts that were able to take advantage of the late December, early January temperatures, that were in the teens, and stockpile the snow in places that were going to be hard hit by the thaw, the mild temperatures didn’t affect them as much.  But for the resorts that couldn’t make those piles, the situation got very thin in several areas.

Late last week, the weather trend returned to normal winter conditions and that sound you heard in the mountains, was the sound of snow guns roaring, producing tons upon tons of manmade snow.  As you know I have been attending my son’s middle school ski club trips to Winterplace and because of those trips, I have been able to conduct some on-slope “product evaluation.” I usually get to Winterplace a few hours prior to the kids’ arrival and hence can get out on slopes to give them a little scouting report when they show up, ready to go. Some take it to heart, others find out the old guy knows what he is talking about after making those first runs.

Not to my surprise, when I arrived at Winterplace this past Friday afternoon, every snowgun I could see was operating, dropping new manmade snow on the slopes.  When I say every gun, I mean, the snowmakers had pulled the trigger on everything they had.  Needless to say, it was a beautiful site.  I even sent Mike a pic from a lift chair and the only thing he couldn’t see was the huge smile on my face.  So when I came in from my turns and prepared to hand out lift tickets to 88 middle school kids, I went on the resort cams page on this site, to see if what I was experiencing at Winterplace was the same at every resort in the southeast region.  Again, not to my surprise, snowmaking was occurring on just about every trail out there.  Plus Mother Nature was providing some natural stuff of her own, here and there, seemingly saying, “Hey I can do this too, you know.” Well mom, we know that, but you can almost drop a January thaw in on us also, so it’s time to take matters in our own hands.

All that snowmaking got me to thinking and my wife Angie will tell you when that happens I usually get into some kind of trouble.  But this time around I don’t think that is going to happen.  I started wondering, just how much money has been invested in snowmaking machines in the southeast.  Then I got to wondering also, do skiers, snowboarders and snowtubers really appreciate just how much money has been spent on equipment to make sure everyone has fun during the winter months.

I am going to take a look at the first question and just guess at the answer.  When I was at Snowshoe Mountain, when it came to capital improvements for the next season, increased snowmaking capacity always got the lion’s share of the budget and I know that has been the case at every resort in the region.  I know people laugh away when resorts report every year in the “What’s New” section on the website, new snowguns, or 6,000 feet of new water lines for snowmaking.  But they don’t laugh when that new equipment helps get the trails out of winter thaw conditions. For the price tag on that equipment, well I have been connected to the snow sports industry in the southeast since 1985, I think I can safely say that a half to three-quarters of a billion dollars have been spent on snowmaking over that period and probably more than that, come to think of it.  This is only a guess, but I would like to hear from anyone who disagrees with me on my figures on the downside.

On top of that, I am not even going into the price of electricity that it costs for resorts to operate their snowmaking systems for just one season.  Believe me when I say, you don’t want to get that bill in your mailbox.

Now onto the second question and to be honest with you, I don’t think the majority of skiers, snowboarders and snowtubers really know or even care how much money resorts have spent on their snowmaking systems.  All they worry about is if there is enough snow on their favorite trails, so that they can go downhill. Come to think of it, that’s really not a bad thing, because when a resort visitor lays out some of their cash (or plastic) for a lift ticket, they shouldn’t have to think about those kinds of things.  All they need to worry about is if they are dressed accordingly (by the way, a topic of a future column) and what trails are open on the day they are at their favorite resort.  Actually, I am fine with that, because seeing as many smiles as I did on all of the kids in the ski club, completely explained, yes they actually did understand, and that’s a good thing, when it’s time to pull the trigger.

Previous Post
Lot’s of Natural Snow in the Forecast this Week. How much Snow has Fallen so Far? Read on.
Next Post
A Powder Day is the Best Way to Start the Week