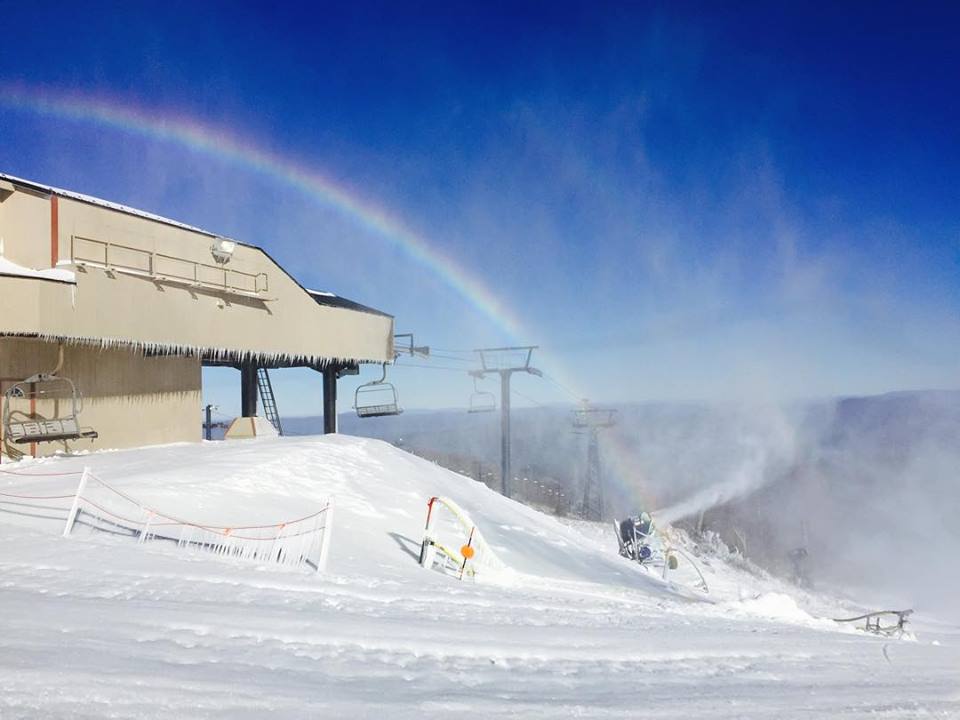 Welcome to yet another morning of actual winter conditions.  This is the third day in a row I’ve been able to wake up and do this report with a smile on my face.  I’m running a little late so I’ll see if I can get this posted quickly for you all.  My new computer decided to update itself overnight and when I sat down this morning the wireless adapter wasn’t being detected so I had no Internet connectivity.  Ah, the fun of Windows updates.

I’m all good now though and there is a lot of stuff to talk about this AM.  I think this is always the most fun part of the season…not early January but rather the beginning of the season when all of the resorts are starting to crank things up.  Resort openings, snowmaking, and increasing trail counts…exciting!

We’ll start this morning with the current weather conditions.  In one word, it’s amazing.  Bluebird conditions are prevalent everywhere this morning. 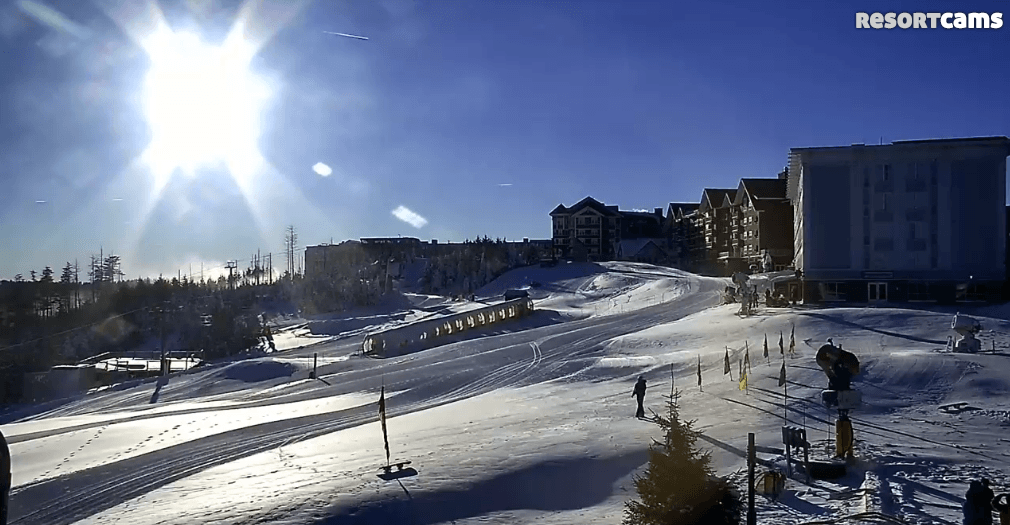 As you can see in the image above from Snowshoe, they have turned the guns off for the time being.  Many other places will be doing the same as well as high temps will be above freezing today for the first time in a while.  We’ve had several days now of basically around the clock snowmaking at many resorts.  So skiing and riding conditions should be superb today.  Suffice to say, it’s probably the best day of the (very) young ski season.

While we’re on the topic of weather, Brad Panovich has sent us his latest video forecast.  Unfortunately, the weekend doesn’t look so great but the good news is that next week looks chilly to say the least.  Snowmaking party at every resort.

His long range temperature model had red colors consistently over us throughout next week.  If that pans out, that means around the clock snowmaking for many days in a row.  Woo!  So don’t fret about the underdeveloped snow this weekend.  We should rebound very quickly next week and even get ahead of where we are now.

Another day, another round of resort openings and announcements of openings.  I will start off with Bryce Resort and I must first apologize for forgetting to mention them yesterday!  I’m still getting into the groove of doing the morning report on a daily basis again and there’s a lot going on right now, but I still shouldn’t have missed mentioning them yesterday.  They are opening for the season today though.

So much snow last night! So much that we need a little extra time this morning. The lifts will open for the new season at 10:30 am today!

They will be skiing and snowboarding today and tonight on 4 trails with all 7 lifts running.  Tubing starts at 6pm.  Should be fun!

Massanutten Resort in Virginia technically opened yesterday, but I’d call it more of a soft opening as they had a single trail and lift.  Today though, they have expanded their open terrain.

Massanutten’s Ski Slopes are now open for day and night! Snowmaking will be in progress as temperatures allow.

Today we will be skiing and riding top to bottom on Lifts 3,4,5,& 6 serving terrain for all levels of ability. 9:00 am – 9:00 pm. Lift #5 is open to midstation today, Upper Showtime opens tomorrow.  Regular Season rates will be in effect.  College Days special, $40 Slope Use ticket with valid College ID.

Snow Tubing is scheduled to open today at 3:00 pm.

Freestyle Demo Days on Saturday at the base of lift #6.

I noticed that they were able to get Diamond Jim open, so there is a black diamond for advanced skiers and snowboarders to enjoy.

Continuing in Virginia, Wintergreen Resort is now open for business.  From their Mountain Blog…

We are skiing and riding today with 7 trails and 3 lifts, operating from 12 noon until 9pm.  Normal day and night operations begin tomorrow.

Snowmaking plan: With some of our core trails re-opened, our snowmaking focus has shifted to Upper Cliffhanger, Lower Wild Turkey, Sunrise, Tequila, Tyro and a larger Terrain Park.  We plan to have all of these trails open by MLK weekend.  Keep checking this blog for updates.

I really like their detailed information that they give out everyday on that blog.  Very useful.

Going a little north into West Virginia, Canaan Valley Resort has opened up shop as well.  Based on some images they posted to Facebook there should be plenty of snow.

Canaan is starting out the day with 4 open trails but they have indicated on their snow report that additional trails will be opening throughout the day.

Finally, we have two announcements of openings.  Sapphire Valley posted on their website that they will be opening Friday at noon.  They are already offering tubing sessions.

Homestead Resort is slated to open Saturday according to their Twitter page.

I still can’t find the ski report page on their website!

I’m pretty pumped to announce that I will be at Winterplace Ski Resort with Joe Stevens tomorrow morning.  We’ll be doing a couple of live broadcasts.  We’ll first be doing a First Trax report around 9am and then we will be broadcasting a press conference by the West Virginia Division of Tourism where they officially kick off Learn to Ski and Snowboard Month.  That starts at 10:30am.

I have never been to Winterplace before, so I’m pretty excited to get to go finally check it out!  They’ve increased their open trail count to 14 today so there should be a lot to snowboard and it looks like the weather is going to be rather nice as well.

That’s it for today.  If you are lucky enough to get out and make some turns I am super jealous.  It should be a good one.  I’ll be envious of all the people I see on the cams.

Enjoy your Hump Day and be on the lookout for me tomorrow morning!