President’s Day Weekend is Here and It Looks Pretty Decent! 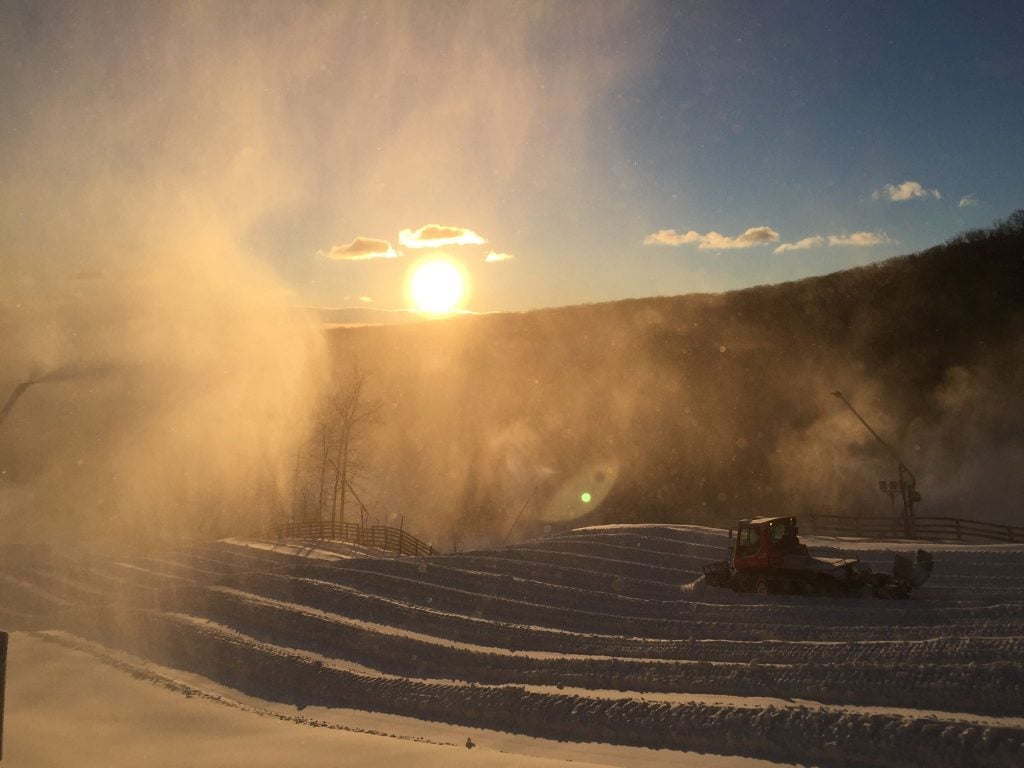 Welp, the President’s Day holiday weekend is upon us now.  An important weekend for the ski resorts, the next few days will see some of the busiest conditions of the entire winter.  Luckily, the past week has provided multiple snowmaking opportunities and a little bit of snow for some.  All in all, these are some of the best conditions we’ve seen all year in terms of base depths and open trail counts.  Good timing!

The theme of the morning is sunshine, sunshine, and more sunshine.  Every webcam I’ve looked at this morning shows lots of it and that will continue for a majority of the weekend. 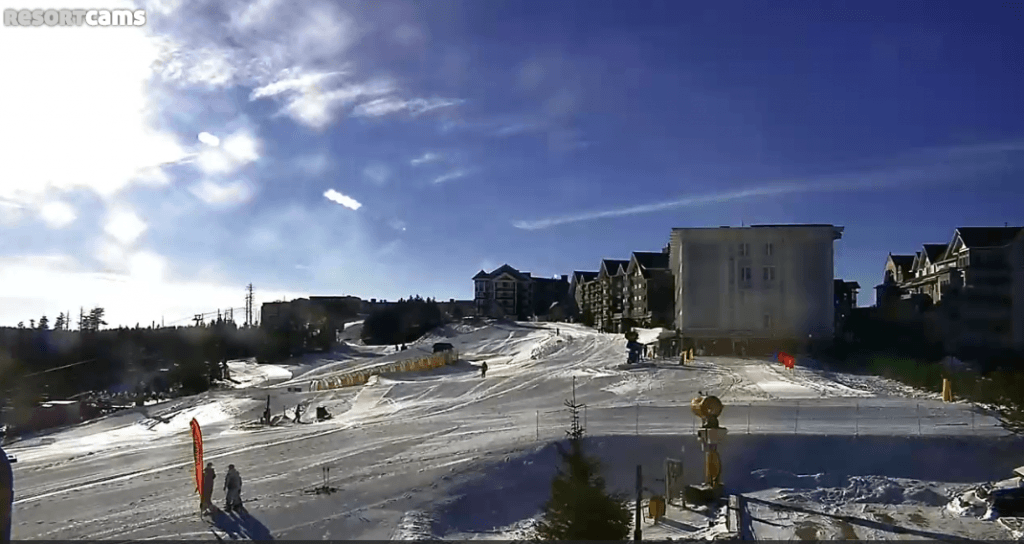 The view at Snowshoe this morning. Like I said, lots of sunshine.

The other theme of the morning is snowmaking.  All but a handful of ski areas are reporting that they have made snow in the past 24 hours, providing some tasty conditions this morning for those lucky enough to start the weekend early.  In addition to that sunshine, I was seeing lots of corduroy on the cams this morning and it had me jonesing to go ride.  I shall have to wait until Sunday!

There is a little bit of natural snow to talk about this morning as well.  Snowshoe, Canaan, and Timberline are all reporting an inch of new snow this AM.  They are weeny amounts, but worth mentioning nonetheless. Those numbers make it 3″ for the Shoe in the past 48 hours and 4.7″ for Canaan and Timberline during that same time period.

Hopefully the resorts were able to make a ton of snow this week because it looks like snowmaking is done for the forseeable future.  Another warm-up is on the way unfortunately.  Here’s Brad Panovich’s latest forecast where he looks at this weekend’s weather and ahead to next week where the mild temperatures are going to persist.

So, the weekend ahead looks to be fine and dandy.  It is going to be mild, but as I’ve said all week, that might not be a bad thing for a holiday weekend.  Saturday/Saturday night looks like some possible light rain, but it’s nothing to cancel a trip over.  The underdeveloped snow during the day on Saturday looks like it’ll mainly be in NC.  Everyone else should stay mostly dry until the evening and overnight hours.  Other than that, mild temperatures and sunshine are the name of the game all weekend.

Looking ahead, next week looks kind of crummy as Brad talked about.  “Blowtorch” conditions return and another spring preview is in our immediate future.  We’ll deal with that next week as it happens.  It’s certainly concerning though.

A Look at Numbers

I try not to go over stats too often as it can get kind of repetitive, but as we are at the President’s Day Holiday we are now about 2/3 of the way through the season and I wanted to take a look at the numbers.  So let’s go state by state and look at base depths and open trail counts.  FYI, for base depths I’m taking the average of the range for those resorts that don’t report a single number.

All in all, considering the less than ideal winter we’ve had, and especially the warm January, these numbers really aren’t that bad.  Obviously we’ve had years past with better conditions and more trails open, but you can only play the cards Mother Nature deals you and the ski areas have done a terrific job of maintaining things this season.  I was not expecting the numbers to look this good and yesterday on the video First Trax I commented how I thought the trail count was somewhere around 2/3 open.  I was wrong.  If you do the math you get 258 trails out of 352 in the region that are currently open.  That’s a percentage of 73.3.  Not bad!

A special shout out goes to Winterplace and Snowshoe Mountain as those resorts are 100% open.  Snowshoe has all 57 trails open for guests this weekend, which is very impressive.  I believe Snowshoe has had 50+ trails open now for at least a month.  Winterplace has all 27 trails open as well and the base cam out there shows some thick slabs of snow on the slopes.  In general, West Virginia definitely has the best conditions right now and is the choice pick for skiing and snowboarding in the region.

I mentioned earlier this week about Timberline and Snowshoe’s season pass deals, and now Canaan Valley is joining in on the deals as they are offering a heck of a season pass offer as well. 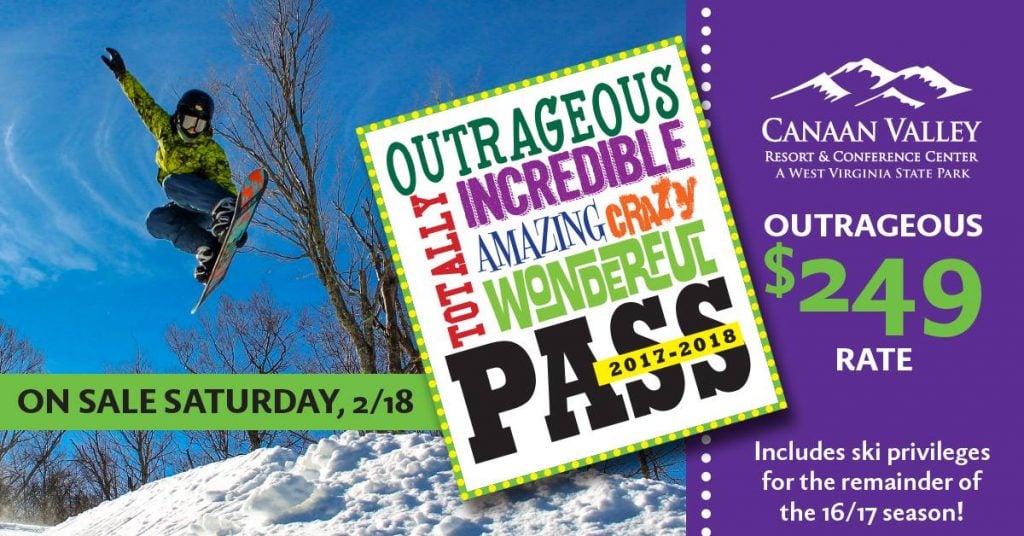 The “Totally Outrageous Incredible Amazing Crazy Wonderful” Pass (they one upped Snowshoe’s Ridiculous Pass) is available for purchase this weekend and it can be used for not only next season, but the rest of this season as well.  At only $249, that is a VERY good deal.  Heck, if you ski all three days this weekend it’ll already be three quarters of the way paid off.  With month or so probably left this season, you could easily have it paid off before next winter even begins!

I am liking these incredibly cheap season passes that Snowshoe and Canaan are offering.  Both offer free skiing for the rest of this season which is just awesome.  Sub 300 season passes are an incredible value and you won’t find that anywhere else in the region I don’t believe.  Shoot, you’d be hard pressed to find that anywhere else in the country.

If you haven’t signed up to join us yet, make sure to do so!  It’s going to be an awesome time and a good way to start the final month of the season.

I’m calling it a week.  Mike will be with you for the next few days.  Everyone enjoy your weekend and get out on the slopes if you can!  I’ll be at App Ski Mountain on Sunday, so if you see me say hey!

Previous Post
A Warm Holiday Weekend Ahead
Next Post
Spring is Here Again…But the Ski Resorts Look Darn Nice. Check Out the Slopes that are Open!