Well, it’s back to the grind today folks! Hopefully everyone had a good holiday weekend and was able to get at least one day on the slopes. The weekend saw some weird weather as there was some rain, sun, clouds, and strong winds all mixed in there. Most of the resorts saw a few inches lost from their base. Holiday crowds combined with a little bit of rain and mild weather will do that. No worries though as all of the resorts are still going strong with impressive base depths. Wisp, Canaan, and Timberline even saw an inch or two of snow in the past 24 hours. 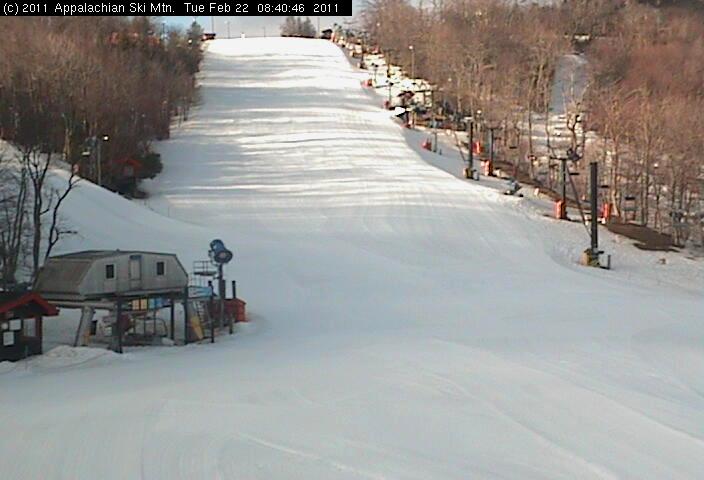 <<<App is still looking to be in great shape this morning. The same can be said for all the region’s ski areas.

It looks like tonight temperatures will get cold enough at most of the resorts that snowmaking ops will resume. I’m sure the usual suspects (Sugar, Cat, Wintergreen, Snowshoe) will fire the guns up and lay down some nice manmade, and I wouldn’t be surprised if a few others did as well. Friday and Saturday nights look like the next opportunities to make some snow. In between now and then, it looks like some rain will move into the region, but as I said already base depths are still looking good everywhere so no worries. After all, it is almost March and roller coaster weather like this is the norm for the Southeast at this time of year. Brad Panovich has sent us his latest skier forecast and we’ll post that sometime today.

As many of you have noticed, the SkiNC site as well as the messageboard has been down over the past day or so. There was some kind of attack on the server and Mike has been working on that issue. It’s funny how I got multiple texts and a message on the SkiSE Facebook page yesterday asking about the site being down. We really do have some hardcore fans and I’m glad to know that I’m not the only person who is constantly on the board looking at stuff. Both are now back up and running so all of you messageboard addicts can get your fix in while at work today! Seeing as it was down for the past day or so, I’ll give the trip report contest one more day in case people post some pictures from this past weekend. I’ll let you guys know who is the winner tomorrow morning.

Finally, I just wanted to remind you guys about the Snowshoe Summit coming up next weekend. It’s almost here! I’m pretty pumped for it and this will only be my second visit to the Shoe. If you haven’t already made reservations, you should do so immediately as Snowshoe is giving us SkiSoutheast members an incredible deal. Free Sunday lift tickets and 25% off lodging, yes please! Click here for some more info and I’ll have some more details about it here soon.

That’s about all for today, here’s a look at the ski areas…

Appalachian Ski Mountain – 42°- Open today on all 12 slopes with a groomed surface. Look for them to possibly make some snow tonight if the temperatures get cold enough, but if they don’t they still have plenty of snow as they are sporting a five to eight foot base. Ice skating is also open today.

Beech Mountain Resort – 34°- Open today on 100% of the mountain with a groomed surface. The terrain park is open with a multitude of fun features and was rebuilt over the weekend. Ice skating is also open today.

Cataloochee – 42.4°- They are open on 100% of the mountain with a groomed surface today. Tubing will be open this week. Look for Cat to make snow tonight if temps allow! Also, just a reminder that it’s Learn to Ski and Snowboard Season at Cataloochee and with the purchase of rentals you get a free 1.5 hour beginner lesson!

Sapphire Valley – 44°- Open today on 100% of the mountain. Tubing is also open and they will have night skiing tonight.

Sugar Mountain – 40°- Open today on 100% of the mountain with a perfectly groomed surface. Sugar is another area where I wouldn’t be surprised to see some snowmaking tonight as temperatures should be cold enough. Skating and tubing are also open. This Thursday they will be having their Spyder Sample Sale where there will be huge savings on select Spyder winter items.

Wolf Ridge – 40° – Open on 14 of 23 slopes today with a groomed surface. Here’s what they have to say – “It’s TUESDAY, 40 degrees on the mountain and the weather man is calling for cloudy skies today. We will have 13 runs and 2 lifts open today and are offering the following SPECIALS: Homeschool: $29.00 lift/ski/lesson: Plus buy one lift ticket and get the second free: (night ski only)The Slopes will open today from 9.00am to 10.00pm so get here early and be the first to Shred the snow. See you at the Wolf!!!”

Send me stuff at [email protected]

Previous Post
We’re In for a Windy, Dry Day in North Carolina! Rainy, Fogging and Not so Good Into WV and Maryland.
Next Post
Wisp Sees Some Snow