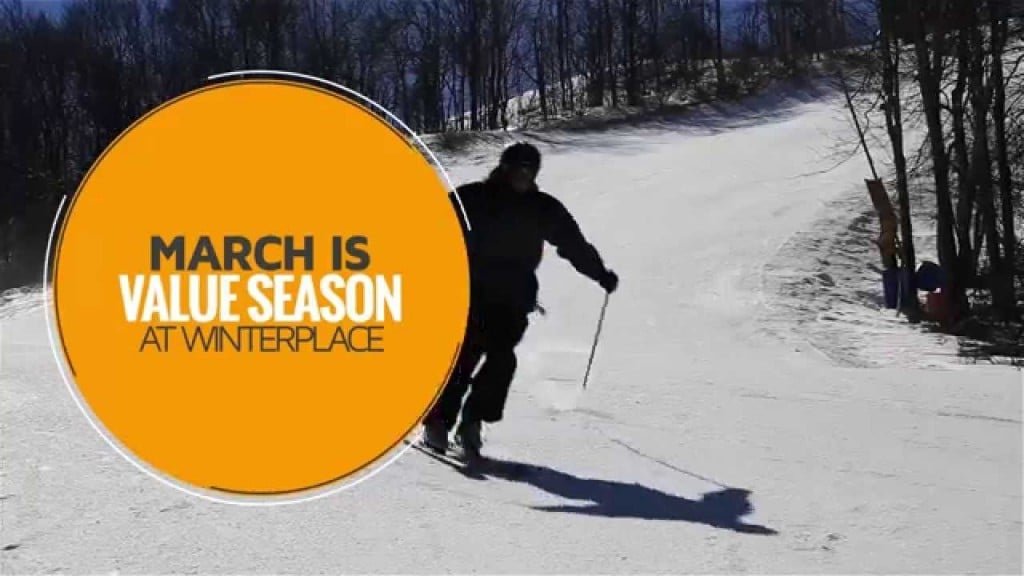 Spring is in full effect today!  After an absolutely gorgeous Sunday, more of the same is in store for today as sunshine, warmer temps, and spring corn are in the forecast.  The cams are all showing blue skies across the region this morning.  It should be a fantastic day on the slopes just like yesterday was…I’m guessing anyways.  As I mentioned on Friday, this was the first weekend in several months that I didn’t go snowboarding.  It was weird, but it was kind of nice to sleep in both days and get some things taken care of.  I’m already itching to get some hot laps in at App though and am looking forward to getting back on the mountain come Saturday.

This weekend saw a couple of resorts close up shop for the season.  Both Ober and Wolf Ridge called it quits for the 2014/2015 season after having stellar years.  Here are some photos that Ober posted to their Facebook page from their final weekend.

That leaves us with 12 ski areas in the region that remain open, with Wintergreen re-opening Friday – Sunday and possibly beyond.  That is not too shabby for March 16th.  There’s been some years where most of the resorts are already closed up by this point, so to have three quarters of them still open is pretty awesome.  Even more impressive is that of the 12 resorts that are operating today, 233 out of a possible 302 trails are still open at those resorts.  That’s 77% of the terrain that is available for skiing and riding.  Not bad!  The ski areas here in North Carolina are all at or just about at 100% open.  The same goes for the Virginia resorts.  Up in West Virginia where they have a lot more terrain, they have more open trails right now but the percentage of open ones isn’t as good, except for Winterplace who is still killing it with all 27 runs open and a huge base.  Check out their latest “This Week at Winterplace” video.  I love how they do this every week.

Notables
Here’s a couple other notables…

– Just a heads up if you are headed to Snowshoe…Silver Creek closed for the season yesterday.  That means night skiing is over with as is tubing.

– Beech Mountain announced that their closing date is this Saturday, March 21st.  There will be no night sessions this week.

– Last week I mentioned Bryce Resort and their possible closing date a couple of times.  They posted this to their Facebook page today.  “Please note that the resort will continue to operate after this weekend Mon-Fri 10am-2pm, along with Saturday’s and Sunday’s from 9am-5pm through Sunday March 29th. We will continue to have tubing on weekends until closing as well.”

– The daily weather report from Canaan Valley mentioned this morning that it’s the first time since January 4th that snow covers less than half of the ground.  I found that interesting.  That’s 2 and a half months of snow everywhere you look!

– Have you ever heard of the M.A.X. Pass?  I hadn’t either until this morning when I saw it on Snowshoe’s Facebook page.  You get to ride 22 separate mountains for 5 days each next year for a total of 110 days.  Snowshoe is one of the resorts included.  Check it out, it’s a pretty sweet deal if you want to travel around the country powder hunting.

https://www.themaxpass.com/
The Week Ahead
If you are planning on skiing or riding this weekend and are worried that today is a preview of the entire week to come and all of the snow is going to melt, don’t worry.  After today’s warmth, temperatures will be on the decline through Thursday.  Today and tomorrow will definitely be mild though.  One of the local forecasters for the Boone area says a “White Legs Warning” is in effect today as many bust out shorts for the first time this year.

Luckily, temperatures return to more seasonable levels for the second half of the week.  I’m looking at the forecasts and I’m seeing highs only getting in the 30’s for a couple of places on Thursday.  Snowshoe even has a chance of a bit of snow Thursday night.  With lows getting down into the upper 20’s and 30′ at night later this week for everyone, the snow should hold up really well for the weekend.  It doesn’t look like a slush-fest so that’ll be nice.  It should be a really fun final weekend for many!