It’s All About Your Perspective – PART DEUX 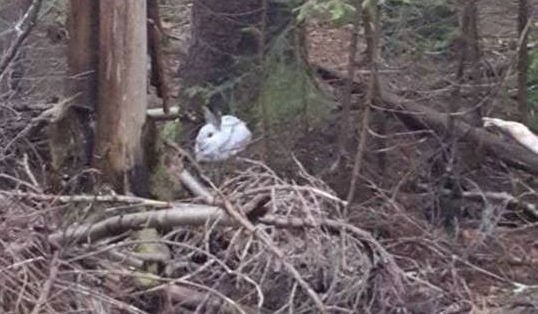 Let’s start with the obvious. The 2015-2016 ski and snowboarding season is on “life-support” and gasping its last breaths as Sugar Mountain will pull the plug on their season at 4:30pm today. There was some question as to whether or not they would do their traditional “burning of the snow” ceremony. However, SkiSoutheast’s Randy Johnson informed us that Sugar will indeed push some snow around, throw some wood in the middle of it and set it afire, signalling the end to their season. 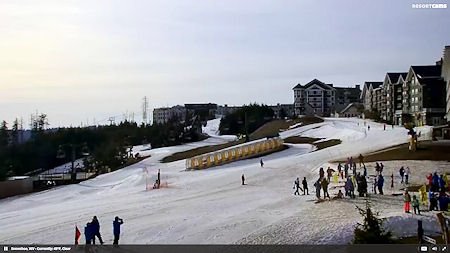 Traffic at 9:04 this morning at Snowshoe.

I would not have thought poorly of Kim and Gunther had they not held the season-ending event since traffic to the mountains – especially mid-week at this point is null everywhere except Snowshoe. However, Sugar Mountain Resort invites you to join them for the burning of the snow, live music, camaraderie and other fun festivities!

Randy Johnson will attempt to be there although he does have another event that he attending. Hopefully we can get you some photos, video, etc.

Yesterday I shared sentiments of some of our readers who skied at Sugar this past weekend and I basically told those who were critical of the conditions there that they NOTHING to gripe about. That sparked a few more emails like these:

“Mike – I follow this site and agree with most of what you say, but I was at Sugar this past Sunday and I have to disagree with you. Sugar was charging $50 bucks for the day and the conditions were not worth $10. You probably ski free there, so you should consider those of us who have to pay.” – Ronnie Robinson, Charlotte, NC

Ronnie, Ronnie, Ronnie. I am so sorry for your pain. I just learned that Sugar’s ticket window peeps are armed with guns and that they are holding them to people’s heads to make you take those tickets. [insert loads and loads of sarcasm here]

Come on guy – when things get sketchy, Sugar has always done a decent job of advising people to go have a look before purchasing a lift ticket. Nobody made you do it. Besides, check out this next guy’s take on this weekend.

Max Thomas of Efland, NC (Where IS that anyway?) wrote, “I was lucky enough to have some time off from work and went skiing at Sugar Mt on Sunday. Yes, the slopes are battered, but DUDE – look at the winter we had! Snow just don’t hold up well in 70+ weather. When I got in my beloved Jeep and headed to Sugar I made the decision to make the best of what I found. So people please in the sport of snow – sometimes it is cold, sometimes the wind blows, sometimes it get foggy, sometimes it rains, and sometimes it is perfect. My suggestion you embrace what ever day you have on the slopes, for too soon you will be dead. See ya at Snowshoe this weekend!”

Well said Max. Well said. Hey one other thing Ronnie – I DO NOT ski free at Sugar Mountain. I am pleased to say that I ski free at every OTHER ski area in the region (Thank all of the rest of our mountain ops friends for that!), but Sugar has always made it very, very clear that if I want to ski there, I will have to pay like everyone else. I respect that. It may surprise you to know that I do play at Sugar – about 3-4 times a season and I hand over my credit card every time that I do.

Let’s give you one more email about conditions and perspective.

Martina Foster of Atlanta, GA wrote, “I was at Cataloochee this past weekend and to be honest I forgot to even look at the snow conditions before we left. When we got to Cataloochee I was happy to see that the slopes were covered pretty good although the base area was pretty sloppy, muddy. We skied for about half the day as it did get pretty slushy after a few times down and unfortunately they didn’t have much open, but we knew that we weren’t going to find perfect conditions. All we all wanted was some snow to play on for the day and that’s what we got. These people who are complaining about conditions probably failed their science classes when in school. After all, 75 degrees plus snow equals slushy.

Another good email Martina. (She emails me occasionally.) Actually Martina – 75° and snow equals water, but I get what you were getting at.

SPEAKING OF THE WEATHER

Sugar closes today, which leaves us with THREE ski areas still open. Cataloochee will close Saturday and right now Saturday is looking like a banner day with sunny skies and highs in the 60s there. Snowshoe will close Sunday and they too are looking at an awesome weekend. Saturday AND Easter Sunday should be in the low to mid 60s with sunny skies. Look for some short-sleeved skiers and snowboarders with lots of red faces! 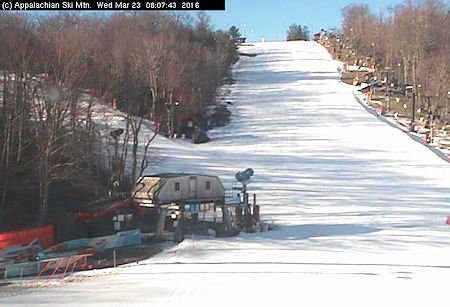 App’s slopes look GOOD. Nobody’s on them to speak of, but the slopes look awesome. Anyone what to meet me?

Appalachian Ski Mountain will enjoy nice weather this weekend as well and they STILL look primed and ready to ride until April 2nd. I think Brad and Drew just wanted to keep me updating a snow report for one more week. They’ve definitely GOT the base to ride it out, although we have seen very few peeps on the slopes via the webcams.

Speaking of Snowshoe – although they have a TON of trails open, the base is around 20″ and that has forced the decision to cancel their annual POND SKIM. They posted, “Unfortunately we will not be able to have the pond skim this year. It takes a very deep base over a fairly large area to build the pond, and make it deep enough to be safe. There is simply not enough snow in the feasible areas for having the pond skim. We do plan on having plenty of other fun events and activities this weekend as part of our Last Hurrah. We hope to see you out there!”

Previous Post
Today, the Snow Burns at Sugar Mountain
Next Post
Social and Interactive Media Keeps Us ALL Honest!