A Perfect Way to End the Work Week…With Snow! 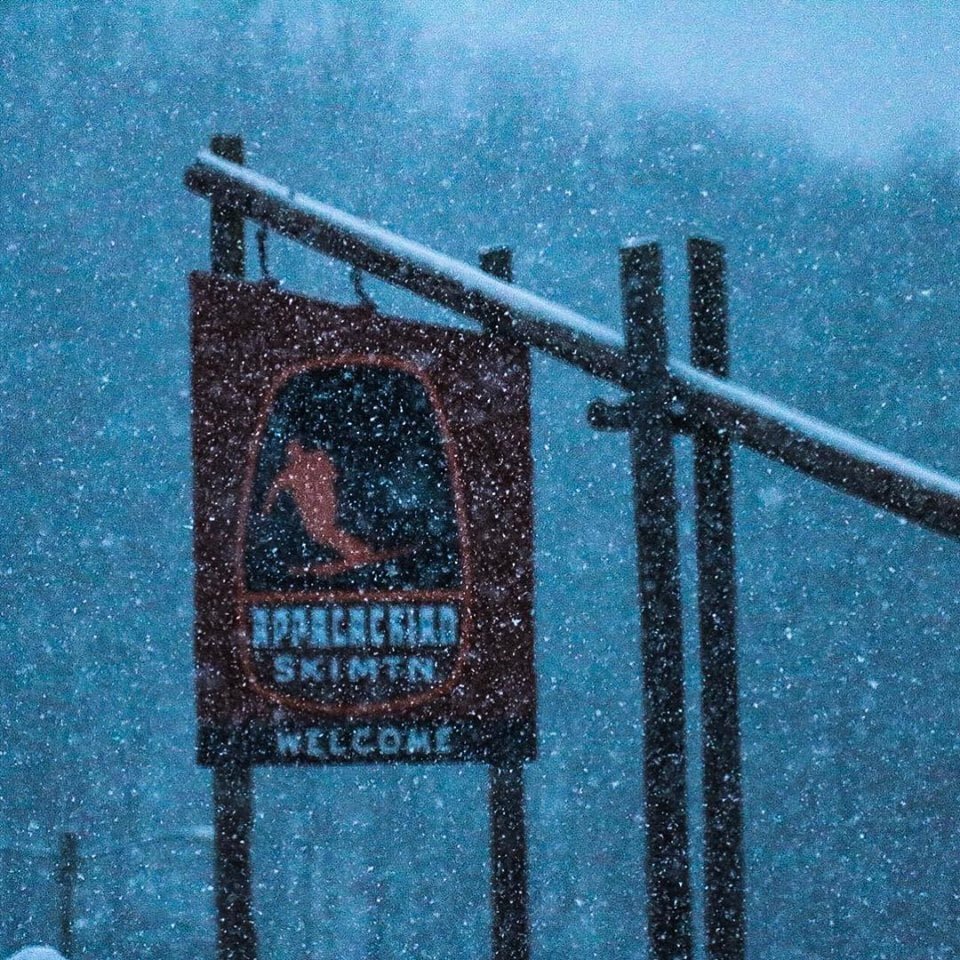 I am finding it extremely hard this morning to sit here in front of a computer and do the morning report.  I so badly want to get up and go ride at Sugar as the snow is coming down fairly hard right now in the North Carolina mountains.  I woke up this morning and immediately started scanning the webcams and all of the ski cams in the state were showing moderate snowfall rates and that is going to continue throughout the day.  Check out the view from Wolf Ridge this morning.

SKIING FROM THE TOP OF THE MOUNTAIN.  We are opening today at 9am with 2″ of new snow and some amazing work by our snowmaking team has allowed us to open from the top of the mountain down.  Skiing today from 9am until 4:30pm.  We have made snow at Tube World located in Maggie Valley, across from Ghost Town in the Sky, four miles from the ski area, but Tube World will not open until its scheduled opening date of Saturday December 16.

With the timing of the snow (it just started a couple hours ago) and the fact that hardly any ski area is open right now, some of the snow numbers are a little hard to come by.  Mike emailed me to let me know that in general the Boone/Banner Elk area has already seen an inch or two.  I’ve gone ahead and marked an inch of new snow for all of the NC ski areas (2 for Cat).  We’ll adjust these as needed.

Today/tonight’s snowfall is mainly going to be confined to the North Carolina ski areas.  Some light snow will spread up into the Virginia resorts, but this is mainly an NC event.  The forecasted snow totals have been upped by a decent amount since yesterday and we’re looking at our first moderate snow event of the season!  The local forecaster for the High Country has a 2-7″ forecast.  Oooweee!  Brad Panovich just released his revised forecast this morning and he has 2-5″ for the NC mountains.  The National Weather Service out of Greenville-Spartanburg has similar numbers. 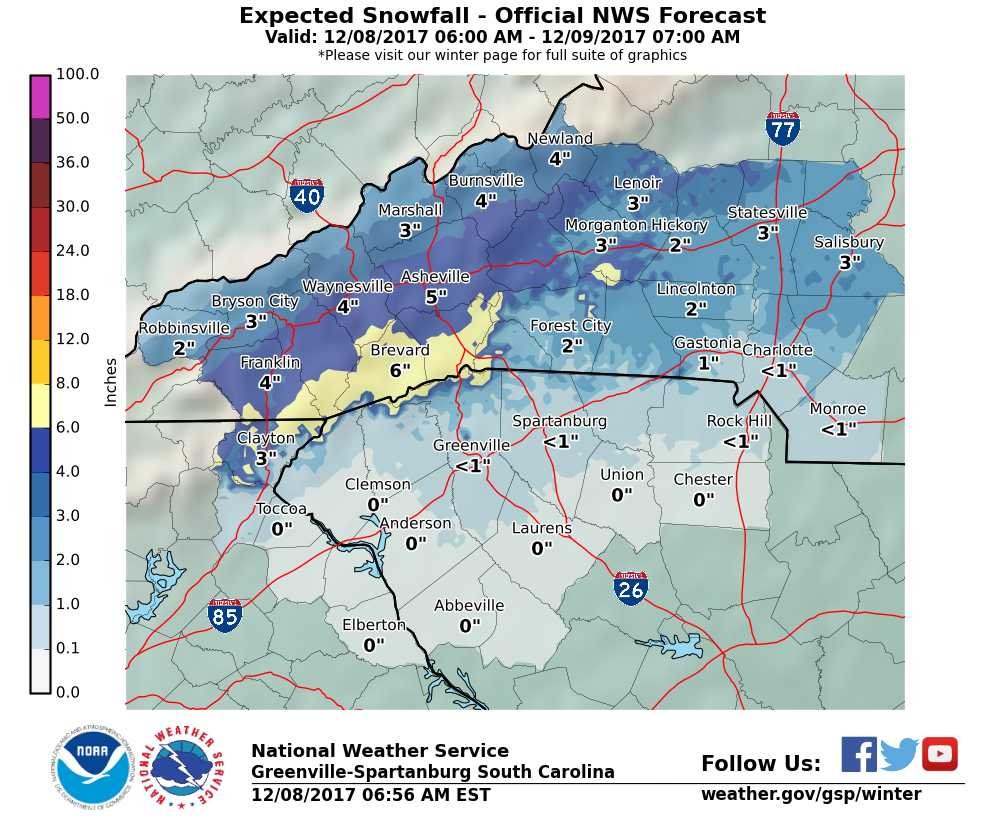 The ski areas are located in the 4-6″ range of that map.  You’ll see the heaviest snow is expected to be in the southwestern portion of the state, which is where Sapphire Valley is located.  It was already semi-nuking out there this morning.

Oddly enough, Sapphire Valley is the only resort in the region who wasn’t making snow this morning.  Literally every other ski area in the region is laying down the manmade goodness this morning.  Peruse through all of our ski cams over on Resort Cams if you don’t believe me.

Continuing with the good news, some more snowfall is slated for tomorrow night as well.  This is of the northwest flow variety.  Another couple of inches is expected for the usual favored areas in events like this.  Those would be Sugar, Beech, and the West Virginia ski areas.  There will also be another reinforcing shot of cold air with this system and Sunday looks downright FRIGID.  I’m actually choosing to go riding tomorrow because I’m a weenie and I don’t feel like dealing with temps in the single digits and teens on Sunday.

Natural snow and rigorous snowmaking will persist all weekend.  All of the ski areas will be able to continue to make snow if they choose to do so (they will).  Yesterday, I went through each resort and talked about their expected openings.  You can go back and read that if you want.  Today though, let’s take a look at the immediate future and see who is going to be open this weekend.

Appalachian Ski Mountain: They’ve been making snow for a few days now and continue to do so.  Four or five inches of natural snow on top of that should make for some amazing opening day conditions tomorrow.  It will look like mid-season out there!  They will be open for night sessions and will actually be open to midnight tomorrow as a part of their Midnight Blast Sessions.  Awesome!

Beech Mountain:  They are re-opening tomorrow and I plan on getting first chair!  Look for them to be open to the top (maybe Robbins?!) of the mountain.  Since they are closed today, all of the snow that falls today and tonight will be there waiting for you tomorrow morning.  Can’t wait!

Cataloochee:  As I mentioned already, they are reporting 2″ of new snow this morning and have re-opened a day earlier than anticipated.  They are open to the top on 6 trails with day sessions only today. 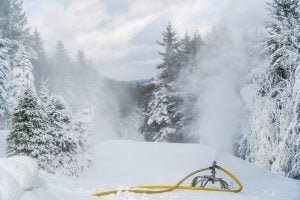 Snowshoe Mountain: The Shoe is open once again today on 8 trails.  Look for that number to increase very soon.  They posted this on Facebook yesterday…

Our snowmakers are taking full advantage of the best early-season snowmaking window we’ve seen in several years! We are working primarily on Central Basin trails at the moment, including Grabhammer, Logslide, and Whistlepunk. Expect those to open in the next 2-4 days.

By tomorrow afternoon, we will be making snow on Cupp Run as well as the “X” (Flume/Hootenanny). If the weather holds, expect Soaring Eagle lift and the “X” to open for next weekend, Dec. 16th. Cupp Run should open shortly after that. Silver Creek and the tubing hill are on track to open by next Friday, Dec. 15.

To top it all off, we’ve got natural snow falling as we speak and plenty more of it in the forecast over the next couple of weeks. The mountain is definitely calling!

Sugar Mountain: Sugar’s website is down this morning but I believe they are open on 6 trails again today.  It should be awesome up there today with the snow coming down!  The cold and snow came at a great time for them as their SugarFest event is going down this weekend.  I have a feeling Gunther’s Way might open soon…

Wolf Ridge: They are still hoping to open tomorrow and based on the screen grab I posted above, they should be able to do so.  We’ll update this if anything changes.

So there you have it, we’re in the midst of a fantastic early December and things are only going to improve.  If everything goes as planned, you will have 6 open resorts to choose from tomorrow and I highly suggest you make plans now to get some turns in!

Mike is with you all this weekend.  Enjoy the snow people!

Previous Post
And We’re Off To a Running Start
Next Post
Mountain Rules Film Series: No Work