Perfect Day to be on the Slopes

This is going to be a WONDERFUL weekend!  The sun will be with you today as you hit the slopes to ski or ride on the great conditions all around the Southeast and Mid-Atlantic ski resorts.  There is so much to share with you this morning that I’m having a hard time figuring out where to start.

How about with a deal that lets you get in more slope time?  Appalachian Ski Mtn., Beech Mountain Resort & Wolf Ridge Ski Resort are combining to offer any North Carolina Ski Area Season Pass Holder a discount on ski tickets of half price or $20, whichever is less. This offer applies any day or night in March on an unlimited basis and is available to any NC Ski Resort Season Passholder that presents a season pass at any of the three participating ski areas.  How about that to maximize these last few weeks?!

The announcement from Appalachian then goes on to disclouse the scheduled closing dates at the participating resorts:

So, this is the last weekend to ski Wolf Ridge – today, tomorrow, and then next season!  To say that Wolf Ridge has been through quite a bit this season would be a huge understatement.  Their season started out with confirmation of a buyout rumor that started last season.  The new owners swept in and shook things up a bit with a new [ex-Snowshoe] Marketing Director and the promise to dump in some money and grow the 4 season resort.  We were all VERY excited around here to learn of this news and had some great conversations with the new management team.

I had the opportunity to hit Wolf this year and meet with some of the new folks.  I came away from the meeting and snow time VERY impressed.  But alas, this was not meant to be.  We shared with all y’all a few weeks ago that the buyout had fallen through and that Orville took back control of the mountain.  We’ve heard some pretty wild rumors about how it all went down – it wasn’t pretty.

This brings us to this, the final 2 days of the season at Wolf.  The mountain is in good shape, having received 2” of fresh natural snow yesterday. 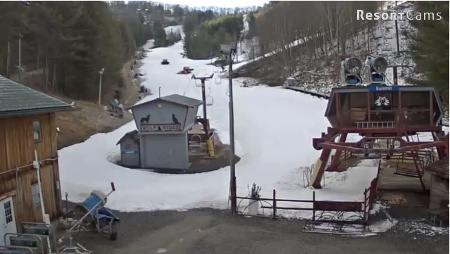 We hate to see a resort close down for the season just like you do, but like Sapphire at least they are not milking it until there’s barely a strip wide enough to piece together a run.

We knew that Appalachian was targeting March 23rd as their final day, but this is the first official word that I’ve heard concerning Beech’s last day.  We have 2 more weekends to get in turns, so let’s make the most of it.  Who’s up for planning another SkiSoutheast day at Beech on their final weekend?!  We’ll have 8 months or so to work off the hangover. 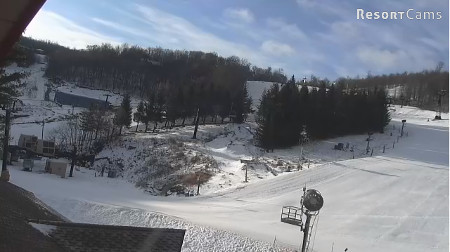 Beech is looking spectacular this morning!

I mentioned in yesterday’s report that I was going to head up to the slopes yesterday.  With this being said, I have a trip report (of sorts) to share with you.  This is not the typical TR so bear with me.

It all started yesterday afternoon around 1 or so.  We are down in Greensboro, NC and I headed out after lunch to see how the roads were.  I didn’t realize at the time that Greensboro’s county was one of the hardest hit in NC from the storm (6-8" plus ice).  It took me 4 tries to make it out of the drive way and the half a mile drive through the neighborhood was one heck of a ride.  Snow was coming over the hood of my Jeep as I was one of the first to venture out (and it was 1:00 in the afternoon!).

I finally made it to the road, a primary road by the way, and after seeing the conditions decided to stay in 4-wheel drive.  I did a 5 mile or so loop to check out the roads and ventured to one of the main arteries in the town.  When I got there, the traffic light was out, there was still a nice layer of slush on the road, and people were out driving like they were crazy.

Looking back, I should have just stopped trying right then and there.  But no, I knew the weather today was going to be about perfect and I was determined to make it up.  Plus, the folks up in Todd were saying that the roads were not too bad up in the High Country.  So I headed back home, loaded up the car with the wife, boy, dog, and gear and headed out.

I had about a quarter tank of gas, so that was the first stop.  It took over 30 minutes of driving around and 6 attempts before we found a gas station that had power AND gas.  Again, looking back I should have just stopped there, but I topped off the tank and we were finally on our way!

We made it to what I thought was going to be safe harbor with I-40 and it was anything but.  We got on the interstate to a complete debacle.  There were cars smashed up against the middle dividers and overturned along the sides.  There were long lines of flashing emergency lights as police, fire, EMS, and tow trucks were handling the wrecks.  We jumped off of I-40 at the 2nd exit we came to and drove back home.  What a disaster!  We were out for an hour and a half and didn’t make it out of the town limits!  If I had not had the family in the car, if it was just me, I would have endeavored to preserver.  But with the wife and boy [and dog] in the car I was just not willing to risk it.

So, I am unfortunately speaking with you today from the warmth of my house instead of the comfort of the slopes.  There’s my trip report.   I’m really sorry now that I didn’t take any pictures, but we kinda got a glimpse of what it is going to be like when the zombie apocalypse comes along and it was not pretty.

I JUST heard from Kenny who got up early and drove up to Beech.  Here is his good morning… 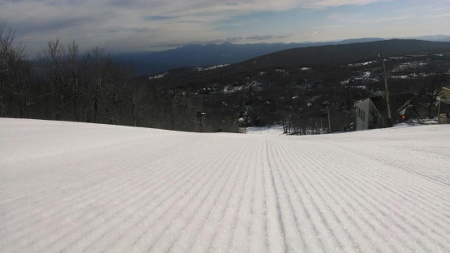 I hope you guys had better luck than I and are able to make it up to take in this most glorious day of skiing and riding.  I am jealous!