PATIENCE IS A VIRTUE!

As I sit here on Sunday morning scribing this week’s words of wisdom, I am looking out my back door in Scott Depot, West Virginia (located just west of Charleston) seeing just over three inches of snow that fell from 6:00 am to 9:30 am during a nice little burst of frozen fun. The snowfall, at least the amount of it, took a few of us by surprise as about an inch, maybe two were in the forecast. 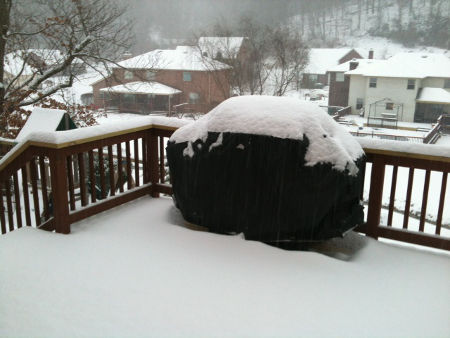 My first thought was if we were getting this snow, the mountains had to be in pretty good shape with what was going on at the high elevations. You see that’s one of the biggest challenges that face the resort marketers in the southeast region, convincing low landers that even if it is green in their back yards, the conditions are most of the time quite different at the resorts.  So when it snows in metro areas like Charleston, Charlotte, Richmond, Roanoke and DC, that’s like a giant billboard right in front of every skier and snowboarders eyes.

However with the snow comes the majority of the news talking heads saying to stay home as the roads are treacherous. I say they just don’t give our division of highway folks enough credit.  But I guess that’s what the consultants are for, when the sky is falling, they want everyone to be aware.  Can you tell I cringe every time I hear the word treacherous during a weather forecast?

Case in point, the past Thanksgiving holiday travel period, while the National Weather Service (NWS) was saying one thing in forecasting the amount of travel precipitation, some weather folks around the region almost doubled what the NWS forecasters were saying and I truly believe that cancelled some folks travel plans and some of those plans involved skiing and snowboarding.  Officials with the West Virginia Turnpike say that traffic volume during the holiday was down 50,000 cars and they believe the forecasts of large (by some up to a foot) snow amounts kept the totals down. When in fact the figure of two to four inches from NWS was a lot closer to reality than what was forecasted by some other weather services.

Now let me say there are times when it is needed to push the “roads are in terrible shape” button, but not with two, three or even four inches of snow as the plow trucks can handle it, especially on roads that surround the ski resorts.  However, sometimes it’s the person behind the wheel that does worry me and that’s another story. The majority of the folks that travel into the mountains of West Virginia, North Carolina, Virginia, Tennessee and Maryland understand that when there is active weather extra time needs to be given for travel purposes.  It’s the folks that see 70 miles per hour posted and think they have to drive that fast just because the sign says to do so.  What those drivers need to realize is that the posted speed limits are set for driving at near perfect conditions.

That gets me back to the case in point, when our weather friends are saying stay home, what they don’t realize is that if they aren’t hitting the mark or being a bit stronger in their forecast they are affecting each and every resort in the region’s bottom line.  Now I am not saying, dam the torpedoes, full speed ahead – do use some common sense when deciding to travel in active weather, whether it be snow or rain.  If you are not sure of any weather forecast you are seeing or hearing I suggest you go to your favorite resort’s website as every property now has a web cam and that will give you a good look at the current weather situation at and around the resort to help you make an educated travel decision.

Let me talk about the road crews in this region, they rock.  They know their job and they know how to get the roads passable and safe for travelers.  They are some travelers or weathermen that act like each snow storm is the highway department’s first rodeo with handling snow covered roads. They actually have the situation well in hand, especially when they are able to get out in front of the weather.  What I like is when I see plow trucks waiting on the side of the road before the active weather even starts.  That is what I call being prepared.

The moral to this week’s column, always use all of the information available to you when it comes to making travel decisions due to the weather conditions.  Then have lots of fun on the slopes and stay a day longer, cause your boss will understand, because they are a snow goose.

That’s it for this week, more to come as the season continues, just remember whether it be cold or whether it be hot, we’ll weather the weather, whatever the weather will be.  Think about it! See you on the slopes and enjoy the coming holidays, you deserve it!