Well, what an exciting weekend it was! No matter how old I get, I always freak out when the first snowstorm hits and the possiblity of snowboarding for the first time in 8 months comes into play. I was playing tennis in 80 degree weather early last week, not even remotely thinking about snowboarding. How quickly things change! Come Thursday, I was wiggin out looking at weather models, Brad Panovich’s videos, and scheming with my friends about our plans for the weekend. I love it.

Let’s start out with a snowfall map from the National Weather Service. 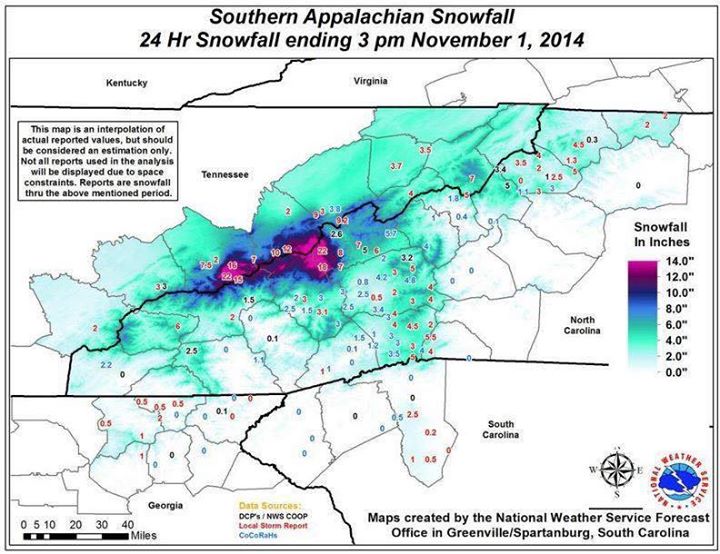 Pretty good right? Especially when you realize this is for November 1st! Obviously it’s not unprecedented (Sandy 2012), but it is pretty nuts to have a storm like this so early. I mean, look at some of those numbers in the Smokies. Mount Leconte had 22 inches. Gnar.

I went up to Beech Mountain on Saturday just to play around and see what it looked like up there, and it was a winter wonderland. I don’t think the NWS snowfall map I posted above is really accurate for Beech based on what I saw. There was a good 10 inches up there. Some of the drifts were knee deep in spots. Again, I went from playing tennis in 80 degree weather on Monday to roaming around in knee deep snow in 20 degree weather on Saturday. Check out the 72 hour timelapse of the Beech Slopeside cam below. It runs from Friday morning through this morning.

After about 36 hours of snowmaking, Cat and Sugar opened to much acclaim on Sunday. I was out at Sugar and I was surprised at how good the coverage was. I was a little worried that the wind would have been a problem, but there wasn’t a bare spot to be seen. Sugar didn’t really announce that they were opening until Saturday night, but everyone knew. There was a good sized crowd out there for opening day. The Weather Channel was even out there! I’m a weather nerd, so I thought it was pretty cool to see Mike Seidel in person. They even interviewed GrizzlyEnton of the messageboard. Check the video out at the link below.

It was one of the better opening days in recent memory for sure, especially once the sun came out and the skies turned blue. As I mentioned, the crowds were pretty good and obviously it was mostly hardcore riders. I was riding the lift up one time and it was kind of surreal to look at what was going on. How much must you love skiing and snowboarding to go out in 20 degree temps and 40 mph winds and ride down a mountain through a gauntlet of snow guns blowing snow and ice in your face? I kind of laughed. It’s pretty funny when you think about it.

Check out this video that my buddy made from yesterday.

Now that the storm and the opening day euphoria is behind us, what lies ahead? Well, if we’re being honest, it looks sketch. Things are going to warm up over the next few days and it won’t get cold again until the end of the week and, as of right now, doesn’t look like then it will be a huge cold shot. I’m not sure how long Sugar and Cat can stay open, which makes the fact that they opened this weekend even more awesome. I love how agressive they are. Much appreciation goes out to them for all the hard work that went into last minute plans to open. I know they had to be scrambling.

We’ll keep an eye on the forecast over the next few days and let you know what is happening, but for now enjoy the snowy views of the mountains on the webcams while you can! And if you can, go play hooky from work today and tomorrow at Sugar and Cat.

That’s it for today, enjoy some more photos of the weekend’s snow below.