Only a Couple of Weeks Left 🙁 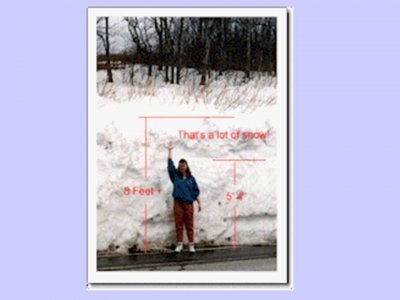 Well, after an extended period of time with some great weather we finally have seen some rain in the last 24 hours. We knew it wouldn't last forever! The good news is that this junk should be moving out later today and colder temps and even some snow are back in the forecast for tonight and tomorrow. Check out the graphic below which shows the snow output through midday Thursday.  It's not a ton of snow, but I'm not complaining. 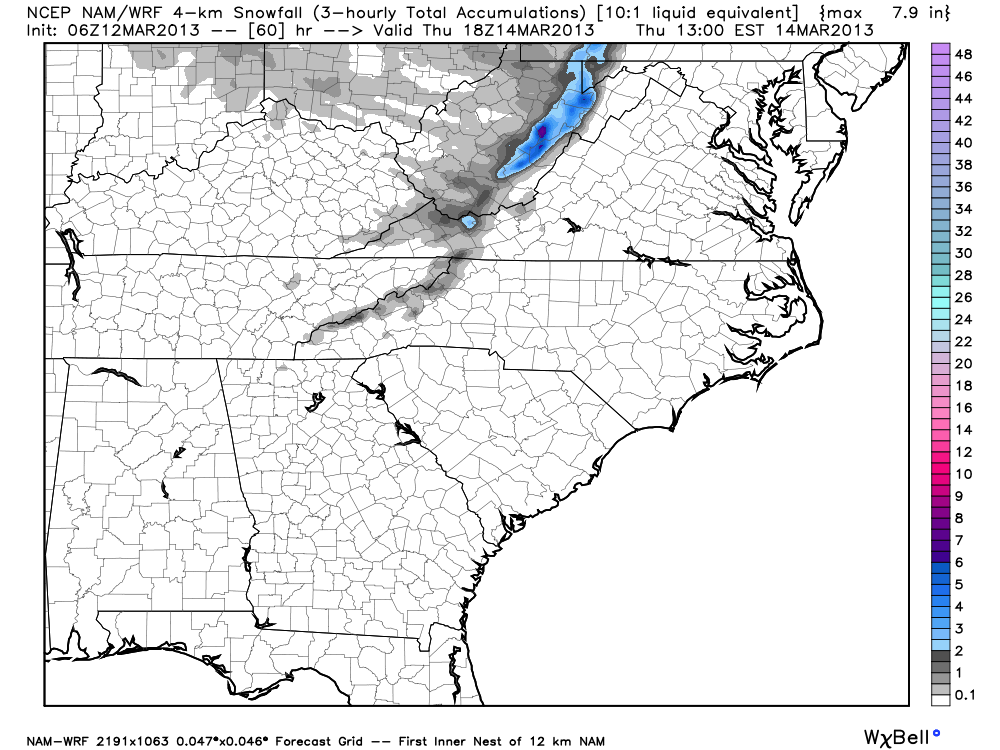 Can March get any better for us? I know we're less than two weeks in but I already can't remember a March in recent memory that was this good. We've had natural snow, with many areas seeing a huge dump last week. Base depths continue to be solid and the trail count at the resorts is just about maxed out. Temps have cooperated and we even had a day or two of some spring skiing mixed in. It's just been awesome. I'm thinking that this has been my best overall season EVER, including my epic trip to Utah. I wasn't thinking that a few weeks ago, but the first half of March has made that an easy call and it's topping off a pretty sweet winter for me.

Even with the continued stellar weather and snow conditions, excluding the last 24 hours, we do need to realize that it is almost the middle of March now and resort closings are a fact of life. Skier visits have begun to drop off, albeit at a much lower rate than in recent memory. I was at Beech on Saturday and I was pleasantly surprised to see how many people were out there. I love being able to ride right on to the quad, but it's also nice to see them doing good business. I don't mind waiting 5 minutes, especially on a weekend. I'm not into the numbers stuff usually and I have no idea how Mike gets the stats, but I'm really curious to see how business was this year. It has to have been really good.

Anyways, like I was saying, traffic is beginning to tail off a bit and will continue to do so. I'm almost positive that there could be a 2 foot powder day on March 31st and the turnout would be pretty low at almost any resort. That's just how it is. Once it gets warm off the mountain, most people forget about snow. Heck, I won't lie I had the spring fever on Sunday. It was 65 degrees down in Charlotte and I went to the gym and then played some disc golf. It felt good. If a snow lover like myself is feeling like that, imagine what the once a year ski vacationer is like.

I'm not trying to bum you out talking about all of this stuff. Heck, we have a good two and a half weeks of the season left. I didn't want to just throw the bad news right in your face, so I had to gently lead you into the expected closing dates. Ha. This might be especially helpful in case you are still making plans for a late season trip. Tonette talked about this stuff briefly yesterday but I figured I'd go into more detail.  Some of these are announced and some are based on speculation by me, so they could be wrong.  I think they're pretty good educated guesses though.

Let's start with the probably/for sure closures coming up this weekend. Ober Gatlinburg, The Homestead, and Wolf Ridge will be done for the season come Sunday afternoon, so if you want to get some final turns at those locations make sure to head there this weekend. Ober and Wolf are actually closed Monday through Friday of this week.

Let's head to Virginia now and look at the three other ski areas there. Bryce Resort hasn't announced anything yet. All they have on their website under hours of operation is “Late Season Hours Until Planned Closing at the End of March”. Does that mean March 31st? My GUESS is no. They're actually closed today to preserve the snow for the weekend. It wouldn't shock me to see them close up this weekend quite honestly.

Wintergreen has already said on their website that they're staying open through next weekend, although they will be closed M-F next week. Massanutten was originally planned to close this Sunday, but I'm guessing they will make it through next weekend now as well. The 2 foot dump last week really, really helped these two resorts.

Up in West Virginia, we're looking at a March 24th closing at the very earliest for Winterplace. They say on their website “We are open thru March 24…and maybe even longer!”. I wouldn't be surprised at all to see them extend that a week. Snowshoe has already said they're open until the end of the month. Canaan hasn't announced anything yet, but none of the winter events on their website go past this weekend, so it wouldn't shock me to see them close up on Sunday. That's a guess based on the fact that they have closed up a week or so earlier than other WV resorts the past few seasons. Timberline also hasn't said anything yet, but I bet they try and extend the season until the end of the month.

The lone Maryland resort, Wisp, doesn't have any announcement yet. Quite honestly, I have no clue how long they will try and stay open. They'll be good through next weekend at least.

Finishing up here in North Carolina, I feel like I have a better grasp on things. App has their Meltdown Games next weekend, and I'm guessing they will call it quits after that. That's kind of a bummer, because I bet they could easily make it another week after that. Heck, they could go well into April probably.  Cataloochee has no specific date yet. They'll make it to next weekend easily. After that, I'm a little unsure.

I've heard that Beech was originally scheduled to close this weekend. However, they still have a ton of snow out there. Like a lot. I'm almost positive that they will push the closing date back to next weekend, and hopefully even further…

Finally, we have Sugar. I'm fairly confident that Sugar will stay open until the very end of the month. They too have a ton of snow out there and are 100% open still. They are always the most aggressive with opening and closing dates, hence why I'm sure they will be one of the last resorts open, as they always are.

If you're planning a late season trip, you should still do so! Spring skiing and snowboarding is always fun and the resorts have stockpiled snow over the past month.

Now that all of that is out of the way, I have to talk briefly about the 20th Anniversary of the Blizzard of '93. Straight up, I was only 6 years old at the time of this event so I'm not sure how much insight I could give into it. However, all of the pictures I've seen and first hand accounts I've read about it make it seem like one of the biggest snow events we'll ever see around here. The graphic below shows the snow totals from the storm.  The entire region got dumped on basically.

Brad Panovich just posted this image on his Google plus page, which shows a more detailed look at NC.

Mike mentioned in an email this morning that “today is the anniversary of the Blizzard of '93 that dumped 44-48" of snow on much of the area. Snow drifts were measured in the 6-10' range and I measured 44" in my front yard while living up on Seven Devils. “ I cannot imagine seeing snow drifts that big. Check out the pic below of his wife standing next to them. Whatttttttt!!!??? 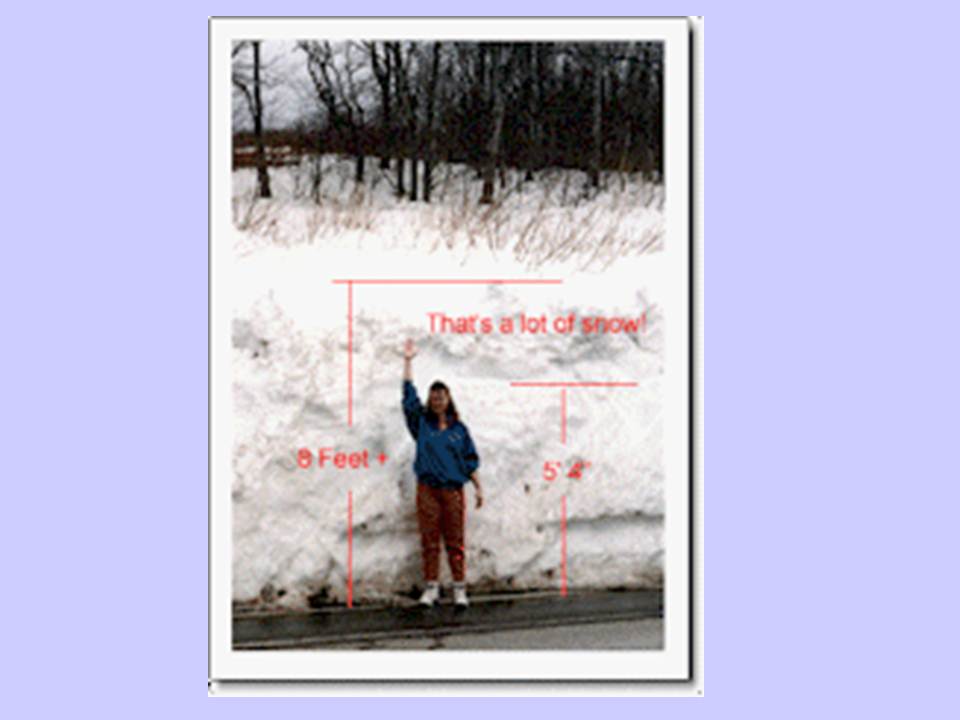 I've seen large amounts of snow before, but never here in North Carolina or the Southeast. That picture is absurd. Anyways, if you have a good first hand account of the storm, we'd love you to send it in to us so we could include it in the morning article tomorrow or Thursday. As I said, I was too young to remember this event and Tonette was only 5, so we're not the best to reminisce on the topic. You can email me at [email protected] or Tonette at [email protected].

Everyone enjoy their Tuesday and make plans to go skiing or snowboarding soon! I give it until the middle of April before I'm already missing it.