Only a Couple More Weeks Left… 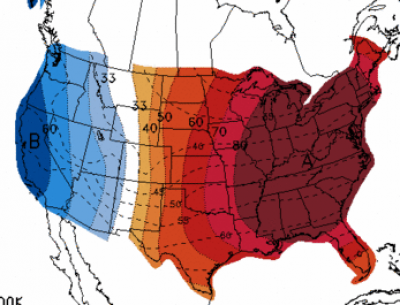 It’s hitting me this morning that the season is almost over. When going through the ski reports, I had to type in "closed for the season" on a bunch of resorts. Then, I’m looking at the forecast for the upcoming week and it looks like spring has arrived. I went out this weekend and bought some new shorts and it looks like I will be wearing them in a few days.

I was down in Charlotte this weekend and quite honestly, I didn’t pay too much attention to the cams or weather at the resorts. Some of my friends were out at Beech yesterday and they said it was pretty fun. Beech decided to go out all for their final weekend and had jumps and other terrain features set up all over the mountain. Upper Shawneehaw had a nice looking jump line on it. I wish they could do that all season long!

<<< I was definitly tempted to go riding at Beech this weekend after seeing this jump line on Upper Shawneehaw.

Like I said, I didn’t pay too much attention to things as I was enjoying the spring-esque weather on Lake Norman so I’m not sure if anyone made snow. Now that I think about it, I recall Cataloochee saying on their Facebook page that they made snow Friday night. I’m not sure about anyone else though. It is March and generally snowmaking has commenced for the season by this point anyways.

I can say with 100% confidence that we won’t be seeing any snowmaking this week (I don’t want to say for the rest of the season because if we get one night of colder temps next week you never know if App will turn on the guns). This week is going to see the early arrival of spring. I’m planning to both play tennis with Mike and get some park riding in at App this week. I might even try to do both in the same day. That would be pretty cool. I’ve done weirder. A couple of years ago I went riding at App in the morning and then went back to Charlotte and played basketball in the afternoon. You gotta love spring in the Carolinas.

After today, temperatures here in Boone are forecasted to be in the mid to upper 60’s for the rest of the week. Needless to say, slush conditions are in effect at the ski areas. That’s not a bad thing though. Some of my most fun days on snow were riding at App when it was 60+ degrees. It’s always nice to be riding in a hoody, or even a long sleeve t-shirt. It’s WAY less crowded too and lifties are usually cheaper as well. Trust me, there’s still fun to be had. 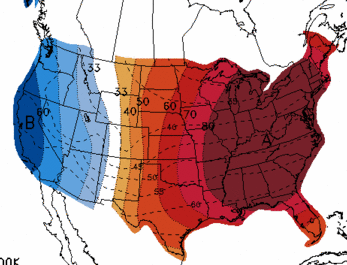 <<< This is a map showing the 6-10 day temperature probability outlook.  We have an 80% chance of seeing above average temps over the next week to week and a half.

So, we have 7 remaining resorts open right now. How many will we have after this week? Good question. I’m going to give my honest opinion and I hope I don’t upset any of the ski area managers by taking a stab at this. First up, here in North Carolina I really don’t think Cat or Sugar will make it past the weekend. I know Cat has a scheduled closing date of March 25th, but it’s going to be warm all week and there will be some underdeveloped snow mixed in as well. Sugar always stretches it out as much as possible, but even they would be reaching if they tried to stay open beyond Sunday.

App should be able to make it to next weekend, March 25th. They are still 100% open and I don’t see any bare spots on the cam this morning. In fact, it looks pretty awesome out there still. 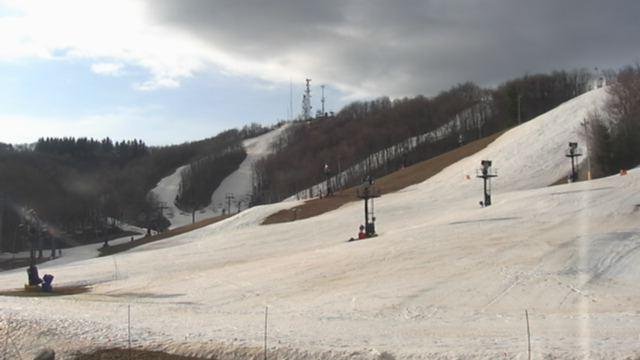 I don’t really know that much about the West Virginia resorts in terms of their closing dates. Winterplace still looks pretty dang good on the cam. They have 23 trails still open and a solid base depth. However, I’m sure business has dropped off significantly and from a business stance, it would make sense to close this weekend. They have March 18th on their site as the last day of late season rates/hours, so I’m thinking they might call it a season this weekend.

Snowshoe won’t be closing until next weekend, March 25th. They will make that no doubt. However, Silver Creek will be closing after this weekend so there won’t be any night riding after Sunday. 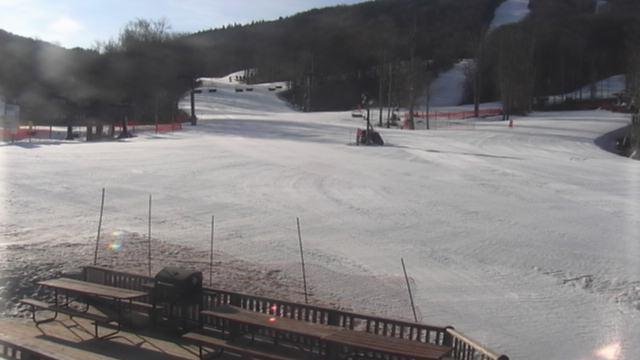 Timberline is hosting their annual Snowy Luau Festival this weekend. After it’s over though, they will only be operating on Friday, Saturday, and Sundays through April 1st. The camera is showing some really good looking conditions up there still!

Timberline is still look pretty good this morning.  I don’t see a bare spot, do you? >>>

As for Wisp, I honestly have no idea what they’ll do. I don’t really know what their tendencies are in terms of closing due to weather, but they are down to 12 open trails now and the weather doesn’t look that great this week. If I had to GUESS, I’d say they too might close this weekend. Don’t quote me on that one though.

Like I said, these are just my best guesses. Take it with a grain of salt if you want. Either way, keep checking back this week and I’ll keep you updated!