Only a Couple More Days… 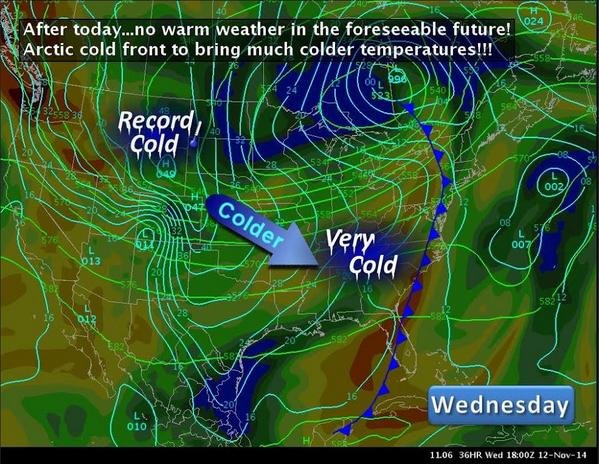 Another slow news day is here.  Not much has changed since yesterday, except for the melting of some more snow.  We’re kind of in a holding pattern right now until colder temps return later on Wednesday and Thursday.  It’s going to feel like spring down here in Charlotte today.  I’m stoked to play some tennis after work but I still have my eye on the weather and am looking forward to the return of cold and snow.

I mentioned yesterday how I thought Sugar and Cat might have to close before the next round of cold.  I’m having second thoughts on that statement now.  Here’s why…if they can make it through this bout of early season warm temps they will probably be good to go for the season.  Looking at the forecast and seasonal outlooks, I can’t imagine a scenario where things get as dire as they are now until spring.  Both resorts usually close at the end of March.  The final Sunday in March this year falls on March 29th.  Both resorts opened opened on November 2nd.  If both can stay open consecutively through the end of March, they’d both be at 147 days.  Looking at historical stats on both of their sites, that would break the record for Sugar.  Their previous high for consecutive days in a season was 140 in 2007/2008.  Cat lists their longest season as 2012-2013 when they had 149 days.  However, I could be wrong but I swear I think they had to close for a few days in early November that year.  So, I’m thinking that this could be their longest consecutive season as well if things pan out like I mentioned.

Hopefully both resorts can hold on today and tomorrow.  They are definitely going to be cutting it close.  Sugar is looking ROUGH at the bottom this morning and Cat is looking thin as well.  Days like this are when the “One Run Refund” that Cat is offering comes in handy.  If you don’t know what that is, they basically offer you a full refund on your ticket after 1 run within 45 minutes of your purchase.  Uber awesome.  I wish more places did that.

The Cold is Coming

As I mentioned on Friday and yesterday, cold is going to make a return Thursday and it’s going to stay here for the foreseeable future.  Around the clock snowmaking Thursday and into the weekend looks like a real possibility and next week is shaping up to be cold as well.  Next weekend looks promising for additional resort openings.

I might set up a timelapse on the Cat base cam to show the transformation that’s going to take place between today and Sunday.  It’s going to be rather significant.  I might just go crazy with timelapses and set them up on all the ski cams.  People seem to like them.

That’s all for now.  Think cold and snow.