ONE WORD, FINALLY. A Father & Son Finally Get the Chance to Ride Together. 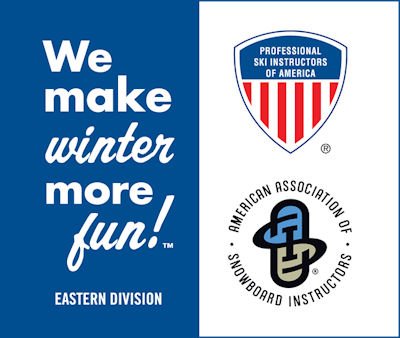 I first got into the ski industry when I first learned to ski at Massanutten Ski Resort in Virginia on January 1, 1985. I had made a resolution and stuck to it. Last year I made another resolution that I would see my then 10-year old son Christian make his first turns on skis before the 2015 was done. Well that didn’t happen but as readers of this column learned a couple of weeks ago, he finally made those turns late last month. Now we have taken the situation a step further. 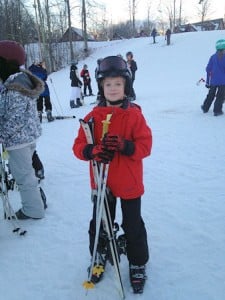 Readers of this column learned recently that Christian joined the Hurricane Middle School Ski Club this season, very anxious to learn to ski and have even more fun during the winter outdoors. Like most kids, he’s always loved to play in the snow. From making his first snowman, to his first snowball battle to sliding down his first tubing hill, he never has wanted to spend a snow day inside the house. We count our blessing for that, believe us.

The first two times to Winterplace Ski Resort with the ski club, he not only took a mandatory group lesson (thanks, Winterplace), he and a couple of his friends followed up the group lesson with some one on one training from another instructor, just to fine tune the art of stopping and turning a little bit more. On the way home after that second trip, he asked me the words I have been waiting for a long time, “Daddy, when are you and I going make some turns together?” Believe me when I say that was music to my ears.

Now it was up to dad to be ready to handle watching his son make his turns with him on the slopes. No problem with the rookie, it was the old guy we had to worry about on this issue. After making it through his third group lesson of the season and a quick bite to eat it was time to hit the slopes together. What he didn’t realize was that dad had been working pretty hard with Tom Wagner of Winterplace on getting my rhythm back on my board. So after we strapped on our gear, we headed to the slopes, under the lights, once again. 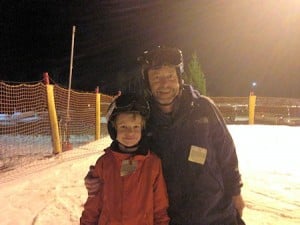 I have watched my son win running races, learn to surf at The Outer Banks of North Carolina and play soccer for the West Virginia Futball Club. But seeing him making turns on the slope was going to be something new and exciting. Of course he didn’t want to ride with dad on the lift, preferring to ride with one of his buds, I figure he didn’t want to hear from dad on what he should or should not do. Can’t really blame him on that one, actually.

So we get off the lift and of course everyone had to wait on me since I had to strap back in to my board, while I had four young skiers raring to go back down the hill and me being anxious to be up close and personal as Christian skis in front of me. Hey I wanted to check out just how well he was doing and of course, if he was in control on his boards. The last thing I wanted to see was another version of a southern bullet and that’s another story for another column.

All I had to say was let’s go and it was as if they were shot out of a cannon as they headed down the Highlander slope with yours truly putting an eye on all of them, especially the one that was going to be riding home with me. I am here to say, hats off to the Winterplace Ski Instructors, not only were all of them in control and I watched with my dad eyes as Christian put some pressure on his outside ski and went right and followed that up with some pressure to his inside ski and went left, all in total control. Is he ready for the Olympics, not exactly, but is he ready to move forward in the sport, oh yes he is and so are his friends. As a dad, again I can only say thanks to the Winterplace Ski Instructors who took care of the boys so they’d learn the correct way from the beginning how to have safe fun on the slopes.

After watching all of them from behind make it down the slope in a safe and fun fashion, I knew it was time to have even more fun and really enjoy the moment that was right in front of me. After getting off the lift for the second time with the young skiing crew, I made sure I strapped in a bit quicker this time and we were off one more time. But this time down the slope, probably in the amazement of the four boys, the old snowboarder led the way down the slope and back to the lift line. When one of Christian’s friends asked me how I learned to make turns as easy as I just did, I looked at him and just said “time on the slope.” Translation, a lot of falling and waiting until I was 29-years old to learn how to ski and also have fun during the winter.

There are those moments that you always remember where you were when a certain thing happened and this is one of those times. I can only thank the surgeon who inserted my new hip into place, which is now allowing me to create even more memories with my son on the various slopes at ski resorts in the southeast or wherever. Now it’s time to get mom on board again with this skiing thing and have as much fun on the slopes as we do running as a family.