One to Three Inches of Snow Fell at the West Virginia Ski Resorts and Snowmaking is in Full Force!

Ladies and Gentlemen I would like to introduce you to a true friend of ours who has not quite been himself lately. He’s obviously suffered a bit of trauma and he’s been admittedly shy about being around people right now. We’re hearing some talk that he’s making some progress and potentially could return to 100% of his former self.

May I introduce you to – WINTER…or at LEAST some semblance of it!

It took me until around 10am this morning to get the snow reports updated for all of the ski resorts because I was having some kind of technical blip – both with my trusty SkiSoutheast laptop and with our main ski network servers. It was odd to say the least since my laptop is here on my kitchen table in beautiful Sleepy Hollow, North Carolina and my network servers are in Dallas, Texas.

I was excited to be post this morning since there’s some NATURAL SNOW to report…and LOTS of cold temperatures that allowed for snowmaking guns to fire on Saturday (at various times around the Southeast and mid Atlantic). Snowmaking is STILL happening as of 10am this morning at numerous locations and that is building base. 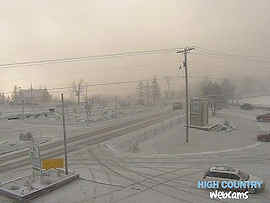 <This nice shot from the Beech Mountain Parkway showed a light dusting of snow. Everything is WHITE this morning.

ONE LITTLE PET PEEVE TO ADDRESS

I’m not sure if a bunch of ski area management peeps discussed this preseason or if one or two just started doing this and the rest are following to "keep up" but I’ve seen several reports already this early into a very challenging season where ski areas are reporting "Packed Powder" conditions. When those reports come after a nice snowfall, that’s understandable. However I’m seeing it a lot this season after two nights of snowmaking on some warm trails. There ARE some ski areas that saw 2-3.5" of snow last night and this morning and you’ll have to click over to www.SkiSoutheast.com to see where that happened.

However manmade snow does not constitute "packed powder" conditions. There is no question that our ski areas make a quality-grade snow and if we’re talking about "manmade powder" I can kind of go along with that, but "packed powder" – not so much.

My buddy, Joe Stevens began complaining about the usage of "manmade powder" a couple of years ago and I have to admit that I didn’t see the harm in the terminology because the snow that these new, high-tech machines lay down is a pretty nice powder when conditions are right. However, it doesn’t measure up to what most diehard snow enthusiast consider to be "powder".

I didn’t see the harm in the usage of the term "manmade powder" when the resorts made it…until now that MANY seem to have introduced "PACKED POWDER" as a followup after a day or two of making "manmade powder". To make matters even more confusing, many resorts aren’t even adding in the prefix of "manmade".

That said, we are not reporting "PACKED POWDER" unless it’s God’s version. 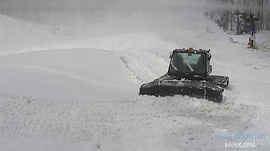 I’m LOVIN’ this nice shot from the new LIVE, STREAMING CAM at Winterplace Resort from this morning! They are bombing ths slopes with snow and pushing it around and getting ready for their hoped for December 24th opening!>>>

A TRACE of light powder fell at the highest elevations at Sugar and Beech and as much as 3.5" of snow is being reported by Tom Blanzy and his team at Timberline Resort this morning! Snowshoe Mountain is reporting an official 1" of snow and Wisp Resort is reporting 2".

MORE IMPORTANTLY, all of the ski areas saw COLD temps and made snow and as of 10am this morning MANY ski areas were still making snow.

WANT TO KNOW HOW CRAZY THIS EARLY SEASON HAS BEEN THUS FAR???

Consider that Snowshoe and the WV ski areas have seen as much as 36" of natural snow this season and some are still not open. Consider that THE MOST natural snowfall at a North Carolina ski area for this season is Beech with 9.1" of snow and yet Sugar and Cataloochee have been open at least every weekend since November 11th.

The cold temps have only shown up for a day or so at a time thus far and that is simply making for some Tijuana two stepping from the talented snowmakers of our region. I was reading some of the latest updates and thought this excerpt would prove rather educational for you guys. Check these statements out. They offer great insight.

This one is from Appalachian Ski Mountain:

With unseasonably mild temperatures for December, Appalachian continues to be as resourceful as possible to give a great riding experience for all guests. All snow grooming has been taking place overnight in order to let the snow set as well as possible and withstand the recent daytime temperatures in the 50’s.

With ASM’s commitment to the highest quality conditions and coverage on open slopes, a few slope changes will be in effect beginning tomorrow, Friday, December 16.

Strudel will be closed tomorrow due to severely thinning snow coverage towards the top of the slope. The usable snow at the bottom of this slope will be pushed to the conveyor slope “Appaltizer” to maintain a solid base depth and consistent snow conditions on this beginner slope.

Orchard Run is also thinning considerably towards the top of the slope, and snow grooming equipment cannot continue to groom the slope as meticulously as desired. Beginning Dec. 16, Orchard Run will be open to serve as access to the Appal Jam Terrain Park; users must have a valid park pass to enter the Orchard access to Appal Jam, and understand they ski Orchard Run at their own risk.

Upper Big Appal and Lower Big Appal have maintained impressive base depths given the temperatures, and these two slopes will continue to be open and groomed daily.

This one is from Cataloochee: 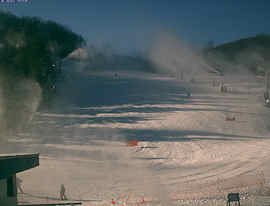 Colder temperatures finally arrived on Saturday morning and we have been making snow non-stop since 5am and will continue as long as temperatures allow. Although we make every effort not to make snow on guests during skiing hours, we will continue to make snow in order to increase our current base depth and additional terrain. . Please note that some of our terrain features will be available for you to ride Upper Over Easy, right down from the Snack Shack, accessed by the Easy Way Triple Chairlift.

On Sunday, we will be skiing on 50% of the mountain on 8 out of 16 slopes from the top of the quad down with three aerial lifts and one conveyor lift operating on a base of 22”-40” and a packed powder surface. On Sunday we will offer three sessions of skiing, day skiing from 8:30am – 4:30pm, twilight skiing from 1pm until 10pm and night skiing from 6pm until 10pm with an afternoon half day rate available.

A COUPLE OF QUICK SHOUT OUTS!

Our weather friend, David Lecher of Canaan Valley has previously announced that he will be shutting down his Canaan weather content effective December 31st of this year. That is so unfortunate because his content is invaluable to fans of both Canaan Valley and Timberline. We checked in this morning and it seems that David has not updated it in a couple of days. There’s a rumor that Dave’s not in great health and David we appreciate ya man and hope all is well with you and yours.

You can get some great content for Timberline and Canaan via the new weather stations and webcams going online this week at www.CanaanValleyWeather.com and via the new camera for Timberline Resort at www.HighCountryWebCams.com (that will not go LIVE til this week). 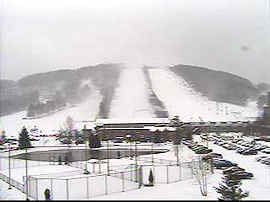 <They are looking quite wintry this AM!

Editor’s Note: Many have asked us about why Wisp has so many cameras but none that really show off the mountain. We are working on that right now and hope to have some great news to share very soon!

Wisp is a great place to play in the snow and Deep Creek Lake is one of the most high-tech resort areas around…so we think we will be able to make this happen.

Here’s some news from around the region…beginning with WISP today and heading South!

Wisp Resort – 21° – Made Snow and saw 2" of new, natural snow and they have their Mountain Coaster Open, 4 lanes of sweet tubing, ice skating and 4 of 32 trails open for day sessions.

Snowshoe Mountain Resort – 17° – Made Snow and saw 1" of natural snow for 34" on the season. They are open with day sessions as well as some of the Silver Creek trails for night skiing. Tubing is open as well.

Timberline Resort – 21° – Made Snow and they are reporting 3.5" of new, natural snow! They are open for day sessions with 4 of 39 trails of groomed conditions.

Winterplace Resort is making snow and preparing for their December 24th opening.

Bryce Resort – 36° – Made 1-2" of manmade snow overnight. 4 Trails open for day sessions only and 2 lanes of snow tubing are open as well.

Wintergreen Resort – 21° – Made Snow – 5 Trails Open for day and night sessions and tubing is open as well.

Appalachian Ski Mountain – 23° – Made Snow – 7 Trails Open with a base of 10-20". Open for night sessions tonight as well and they are offering ice skating as well. 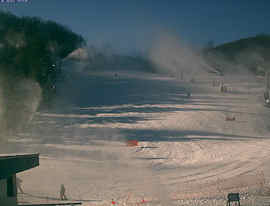 <Snow looks GREAT at The Cat this morning!

Cataloochee Ski Area – 29° – Made Snow – 8 Trails Open with a base of 22-40". Open for night sessions tonight and they have tubing available as well.

We’ve heard lots of great comments coming from many who have played at Cat this season. Things look pretty sweet this morning and traffic looks pretty brisk on their LIVE cam shot. 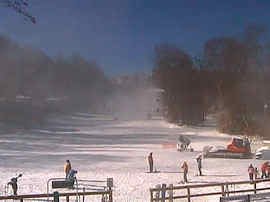 Sugar Mountain – 19° – Made Snow as well as a TRACE of natural snow – 7 Trails Open (to the top!) with a base of 6-30". Open for day and night sessions and ice skating is open as well. No snow tubing today.

Sugar has done a AMAZING job of turning around the base area. On Saturday morning I would not have skied that part of the mountain with YOUR SKIS, but this morning after nearly 24 hours of snowmaking things look great!>>>

Sapphire Valley – 28° – Made Snow and hoping to open their Frozen Falls Tubing Park Monday and get the slopes opened before Christmas.

Wolf Ridge Resort – 29° – Making Snow since 5pm Saturday evening. None of the cams are working anymore and not much is happening in terms of communicating their plans.

Ober Gatlinburg wrote, "Made snow until 10am! The snowmakers at Ober Gatlinburg will continue working around the clock when temperatues permit until there is enough base snow to provide a quality product for skiers, snowboarders and tubers. We are committed to offering our guests the best conditions and plan to open the slopes and tubing as soon as possible. THINK COLD!"

That’s it for today peeps! Enjoy your day and THINK COLD and THINK SNOW!