One More Day of Rain, Snow On the Way 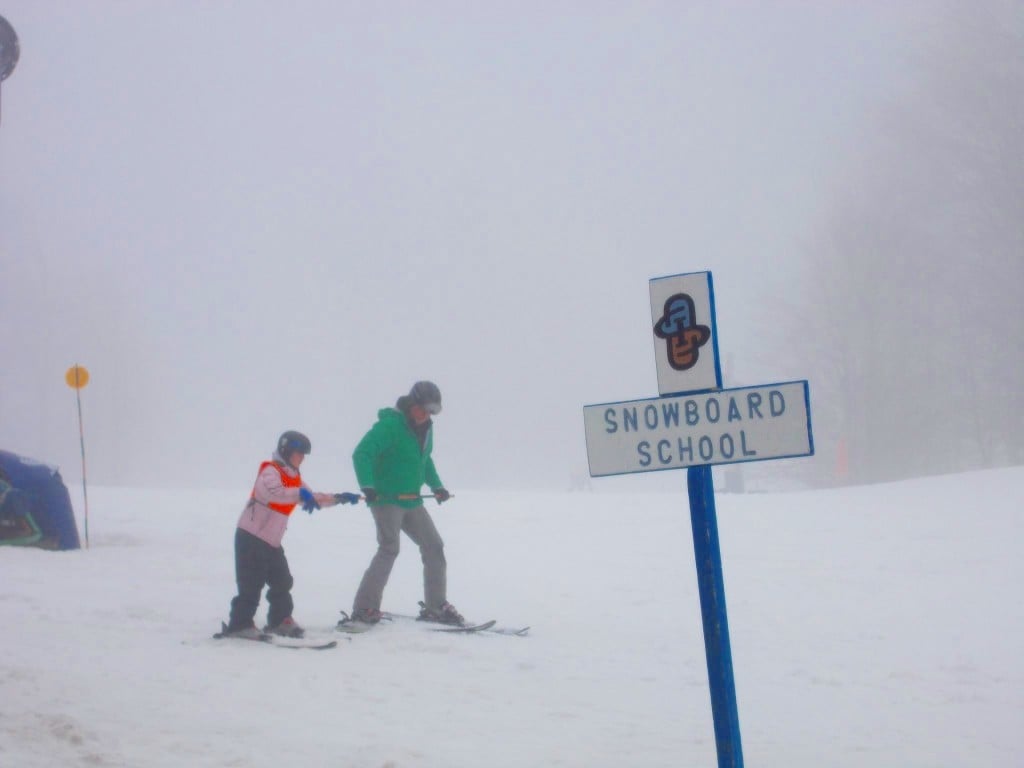 Another day, another morning of dreariness.  I’d have to say this is our worst stretch of weather since December.  We’ve had a pretty good run of it in January and February.  That’s probably why this weather has been bumming me out so much.  We haven’t had to deal with it all that much in 2 months now.

The good news is that today is the final day of our 3 day stretch of crummy weather.  Colder temperatures aren’t too far away now and once we get through the next 24 hours we’ll see a couple days of snow.  The bad news is that today might be particularly nasty with storms and what not.  The weather system that will move into the region today actually produced some tornadoes and strong winds down in Florida and Louisiana last night.  The ski areas won’t be dealing with tornadoes and what not, but some of the storms could be intense at times today. 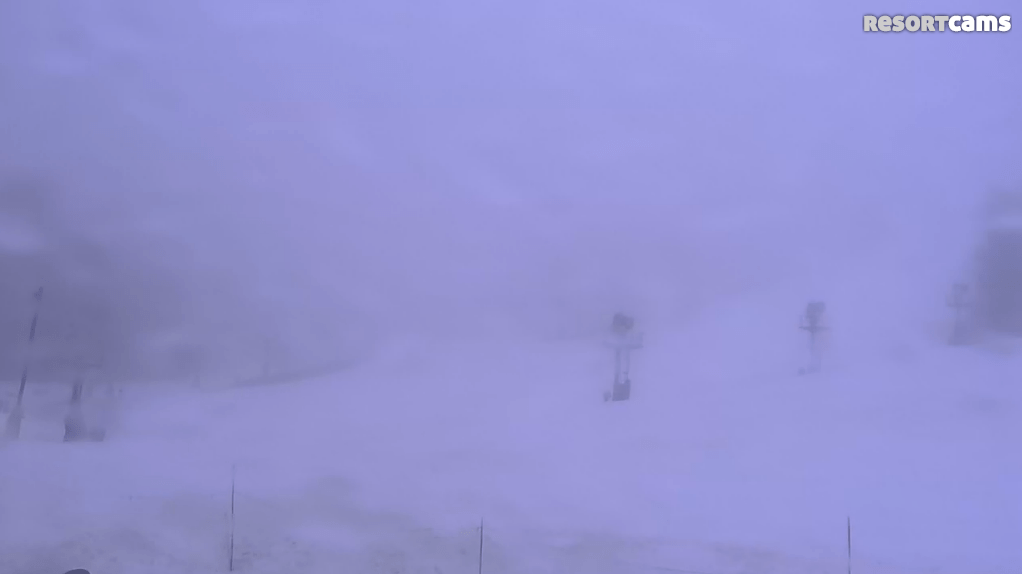 Winterplace this morning. Foggy conditions like this exist everywhere today.

I mentioned yesterday how I figured a few resorts would probably be closed today due to the weather.  Sure enough, there are three.  Appalachian Ski Mountain, Bryce Resort, and Wolf Ridge have all decided to play it safe and will remain closed today.  Probably not a bad decision on their part.  I can’t imagine too many people will be on the slopes today to be honest.

If you are a hardcore skier or snowboarder and plan on getting some turns in today, be aware of the weather and that there could possibly be some lift delays at times.  Massanutten noted this on their snow report and it applies for each resort.

On to the good news.  And that would be the talk of snow.  In one breath I’m talking about storms and in the next I’m talking about snow.  You have to love winter weather here in the Southeast.  Anyways, once the cold front moves through tonight, Northwest Flow begins to kick in for Thursday and Friday.

Snow totals still look to be decent for the favored ski areas in North Carolina and West Virginia.  Friday has the very real possibility of being a mini-powder day for some resorts.  Several inches are in the forecast which would be a great way to end the week.  Here is the current NWS forecast through Friday evening… 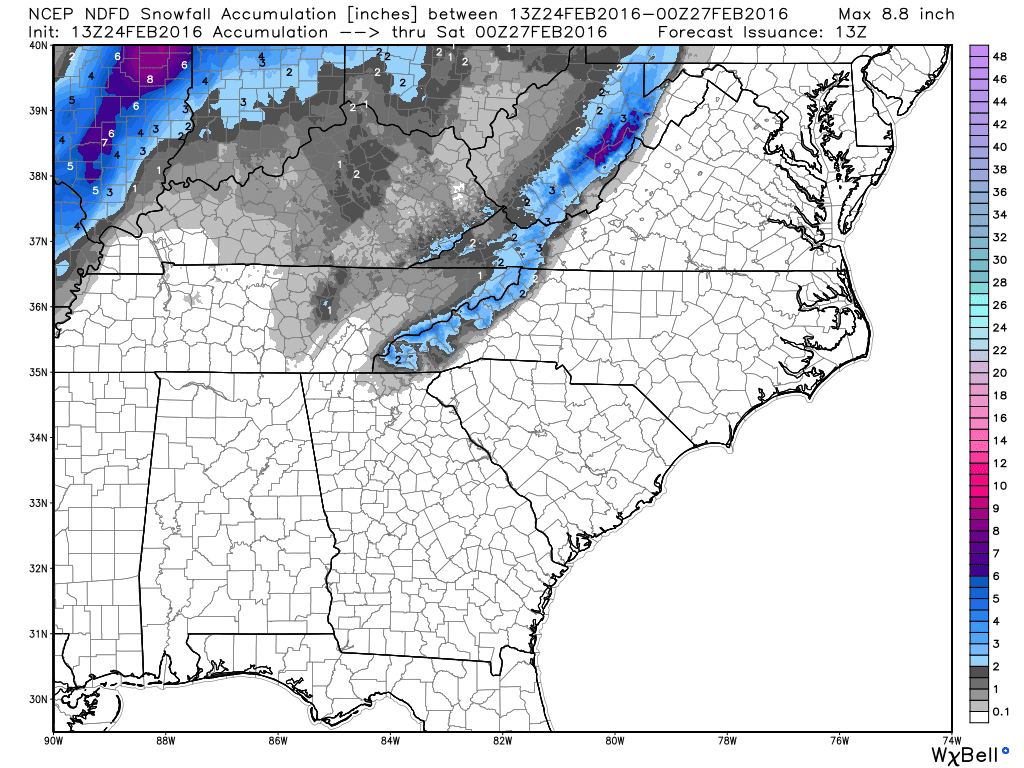 The resorts that don’t get in on the Northwest Flow action will still see temperatures low enough at night to make snow if they so choose.  Lows overnight on Thursday and Friday should get into the 20’s for everyone.  I saw a few remarks on the snow reports where they mentioned snowmaking resuming as soon as possible.

So yeah, one more day of crummy weather and then we’re smooth sailing for a bit.  The resorts should recover quickly and the weekend looks great.  I’m already planning on riding Saturday, you should too!

So, as many of you know Timberline had a lift accident on Saturday morning.  Mike wrote about it this past weekend.  Basically, the crossbar on one of the lift towers broke off.  Luckily, nobody was hurt.  Timberline has been VERY transparent about the whole incident and has been giving frequent updates on their Facebook page.  They posted this update yesterday…

“…That said, we have taken the following measures to ensure the safe re-opening of Thunderstruck. We have assembled a world-class team of manufacturers, engineers, and safety inspectors who have been working diligently since the event took place to assess and repair the lift, with multiple levels of oversight at every step in the process. Partek Ski Lift Enterprises and Beitzel Corporation are working together to complete the job at hand. The initial tower work is expected to be completed by Wednesday. Exceeding industry standards, every lift tower and weld has had NDT inspection performed by Ariel NDT, and all welds on the new modifications will be inspected prior to lift reopening. Tower 12 will receive a new cross-arm installed by Ropeway Construction with anticipated completion by Thursday. Ropeway will also perform a haul rope inspection to be completed by Friday (after the tower has been repaired).

We are requesting that these same experts do a thorough inspection of our other lifts as well, even though they are performing properly. We anticipate all inspections and load testing to be completed, and for Thunderstruck triple lift to be fully operational by Saturday morning, February 27, allowing skiers to enjoy the rest of ski season in confidence…”

You can read the whole thing on their Facebook Page, but the main takeaway is that it looks like the Thunderstruck Lift will be completely fixed and operational by Saturday morning, just in time for the weekend.

And finally, this is really random, but I saw a cool picture posted on Facebook yesterday of Massanutten Resort.  It is worth sharing as it is an awesome aerial shot of the Virginia resort.

Photo of the Day - February 23, 2016. Massanutten - one of the fantastic aerial photos taken last Friday!Because of...

Enjoy your Hump Day and check back tomorrow as I’ll hopefully be talking about snow!  Think cold and think snow!