One Final Night of Snowmaking for Several Days, All Resorts are Open Now! 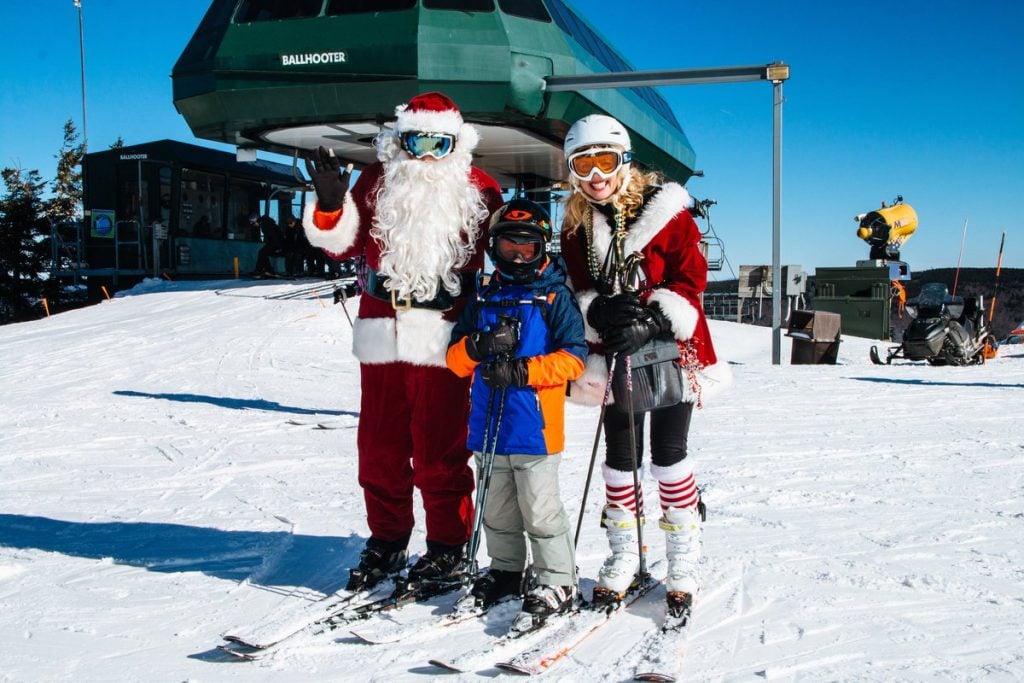 Merry Christmas Eve Eve everyone!  I hope everyone is enjoying this final Friday before Christmas.  I’m sure many people are doing some last minute shopping but hopefully some of you are able to get some skiing/riding in today.  It looks like it’s going to be a good one!  I had been planning on going riding at Beech today, but my fiancé and I are hosting Christmas at our new house this year which means I have lots of chores to do today!  #AdultLife

As the title of this post alludes to, all ski resorts in the region are now open for the season.  Awesome!  The final two, Timberline Resort in West Virginia and Omni Homestead in Virginia, commence their seasons today.  They both must still be getting into the swing of things as neither resort had their snow report up as of the time of this writing, but thanks to technology we can get a view of both resorts via webcams which I have inserted below.  You can click on each image to enlarge. 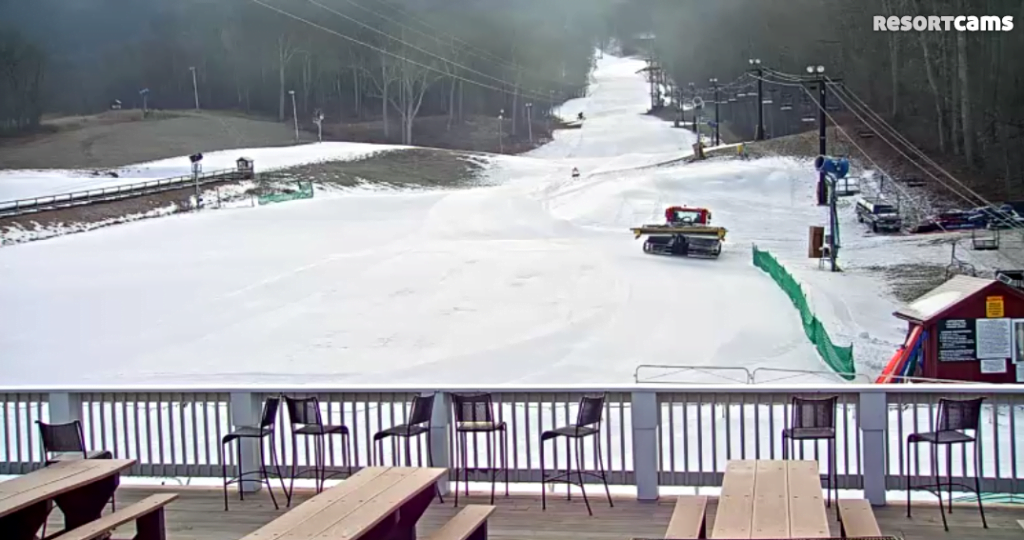 Grooming going on at Omni Homestead this morning. 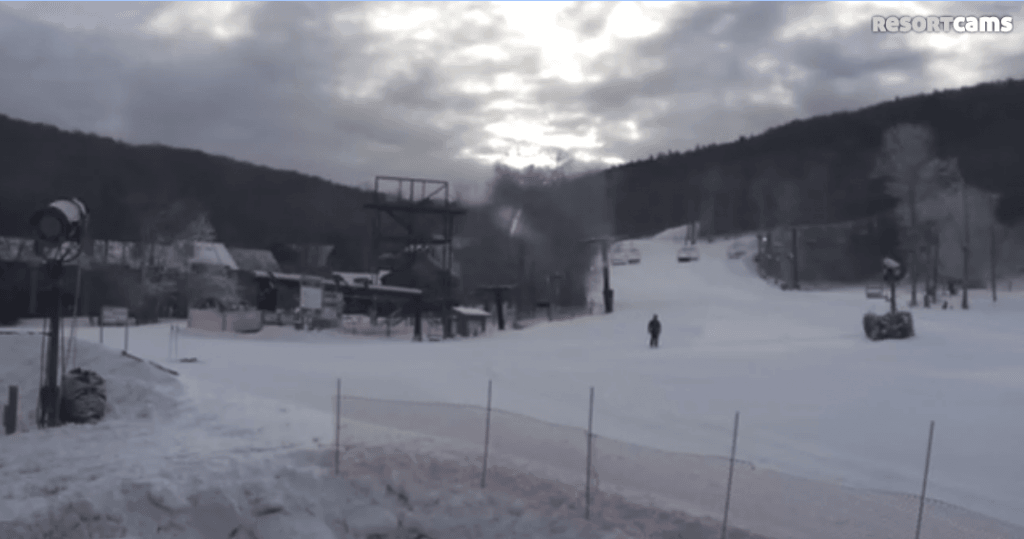 We also posted a press release from Homestead last night and you can view it by clicking the link below.

It took until December 23rd to get there, but we finally have all 17 ski areas open for business.  And just in time for the holidays!  That must be a welcome relief for many of you who have a Christmas vacation planned. Last year at this time things were not looking so good for the holiday week, and while things aren’t quite where we’d like them to be, conditions this year are much, much better.  For reference, last year on this date we had a total of 54 slopes open.  Many resorts closed temporarily for a week plus after this date in 2015.  This year we have 170+ open runs.  As I said, much better!

Temperatures overnight dipped below freezing for most of the region.  That means snowmaking took place at a lot of resorts.  I was watching the Snowshoe Boathouse cam last night and it could have been mistaken for a blizzard out there.  Well, it was a blizzard technically, just manmade.  Below is a quick little clip I recorded.

Here is the list of resorts who are reporting that they made snow overnight.

So about half of the resorts were able to lay down some manmade snow overnight.  Some were continuing to do so this morning before they have to turn them off for a while (more on that in a minute).  Sugar Mountain was making snow this AM and I’m sure some people were wondering why when the temperature was 39 at the base and 38 at the summit.  Well, the air is super dry right now.  The humidity out there this morning was only 11%.  Snowmakers don’t use the air temperature when determining if they can make snow, they use the wet bulb temperature.  Below is a chart which describes what wet bulb temperature is and also shows at what temps/humidity levels you can make snow.  Click on it to enlarge. 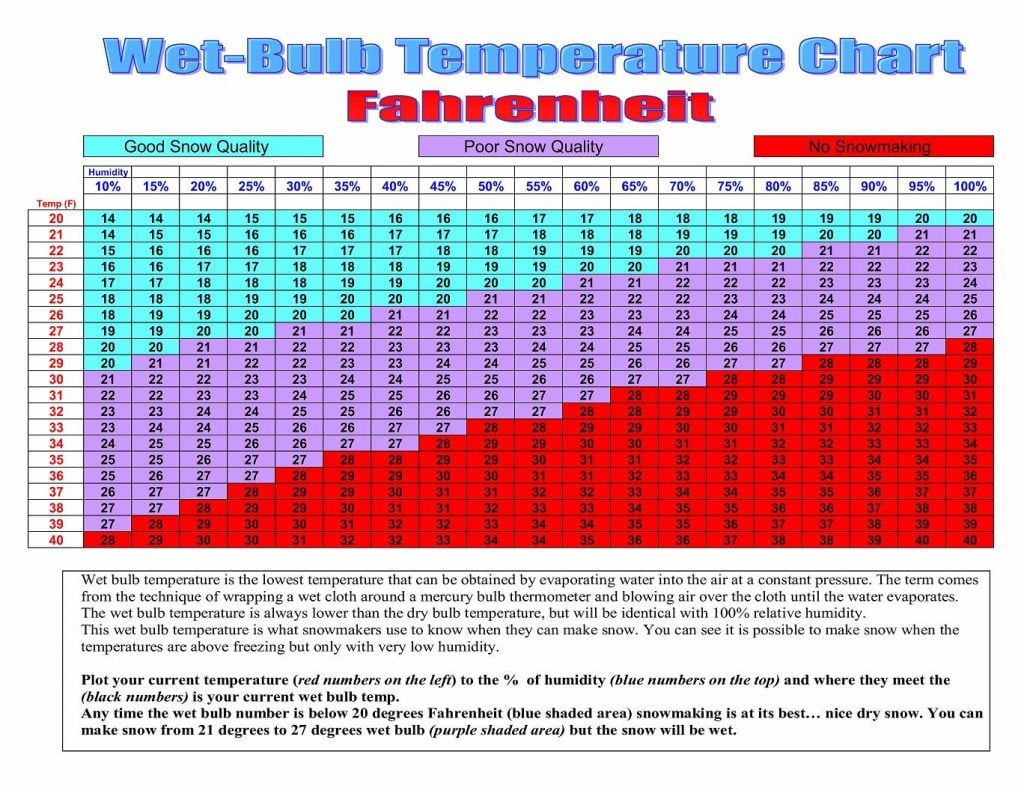 As I said, it was 39 degrees with a relative humidity of 11%.  Line that up on the graph and you can see they were just barely able to make snow.  It was in the “Poor Snow Quality” range, but it’s still snow!

Probably Done For a While

Last night is probably the last time we will see snowmaking for several days.  I’m looking at the forecasts for all of the resorts and the only location I see that has a chance of seeing sub-freezing temperatures tonight is Snowshoe, and even then it’s only going to be 31 degrees.  That’s marginal at best.  Other than that, it looks like snowmaking is done until next week.  Brad Panovich sent in his latest forecast for the upcoming weekend and into next week.

So yeah, we’re about to see things warm up a bit in the coming days.  Most resorts should be fine though thanks to the recent cold over the past several weeks.  I am worried about a few resorts though and they are the ones in the southern most portion of the region.  Those would be Ober, Cat, Sapphire, and Wolf.  I saw a picture from Cat yesterday and one of the slopes looked a little thin and narrow, so they might have to drop some trails in the coming days.

On the glass half full side, with temps in the 40’s and 50’s that means it’ll be hoody skiing weather.  Cold and snowy weather is awesome, but sometimes it is nice to not have to completely bundle up to go skiing or riding.  That and there won’t be any snow guns on, which I’m sure will be to the delight of many people.

As Brad talked about, there is some hope for next week that cold and snowy weather returns for the New Year’s weekend.  I watched his video last night and when I heard the phrase “first bona fide NW flow event” in regards to late next week I got excited as I’ll be at Snowshoe.  Hopefully it pans out and we get some natural snow, but even if that doesn’t happen a few days of snowmaking will refreshen the slopes nicely for New Year’s weekend.

This is just a reminder to make sure you check the ski areas holiday hours and rates before heading out.  Some resorts are charging holiday rates today and next week (Monday-Friday).  That means weekend prices.  I just wanted to give a heads up on that.  Also, it looks like most resorts are open for day sessions only tomorrow and then afternoon and night sessions on Sunday.  I’ve been snowboarding for 10 years now and I have never ridden on Christmas Day.  I need to make that happen.  Anyways, just make sure to check each resort’s holiday schedule before you head out.

That does it for today.  I will probably be back with you guys sometime next week from Snowshoe!  Mike and I plan on doing some live broadcasts, so you’ll get to see my beautiful mug then.  Until then, he has ya’ll covered.  Merry Christmas everyone!

Previous Post
Brad Panovich’s Ski Forecast for Christmas Weekend and Beyond
Next Post
SKI, SNOWBOARD, AND ZIP THROUGH WINTER AT THE OMNI HOMESTEAD RESORT IN THE ALLEGHENY MOUNTAINS