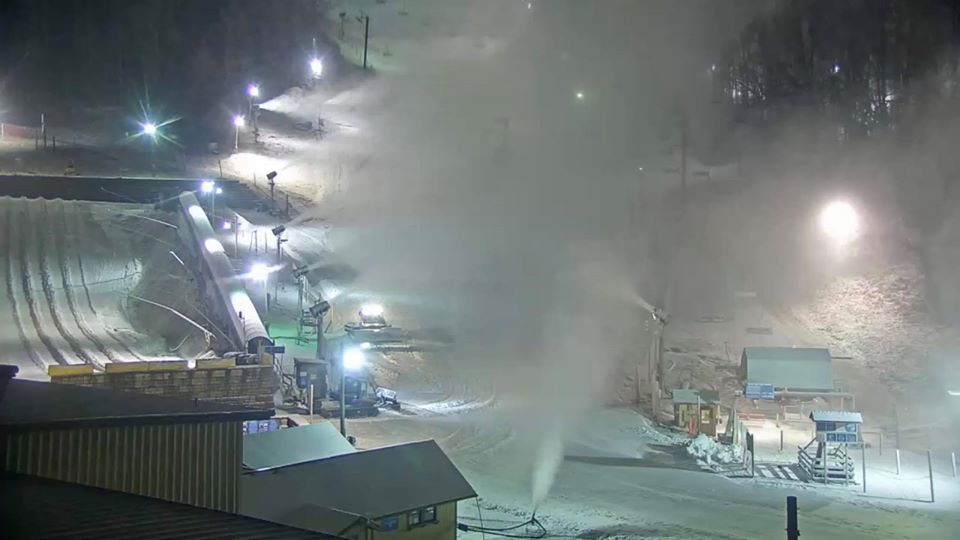 Old Man Winter has returned just in time for the holiday weekend.

After a week of rain and warmth, cold temperatures have invaded the area that has allowed the mountain operation crews to crank up snowmaking at every resort in the coverage area. This morning, we are waking up 20-30 degrees colder then we were at this time yesterday.

On top of the cold, some natural stuff fell overnight with a few flakes still falling this morning in the northern part of the region. Snowshoe recorded two inches of snow, while Wisp and Canaan recorded around an inch. Sugar and Beech received around half an inch of natural powder and Ober Gatlinburg, Winterplace and Wolf Ridge received a trace.

It is a great way to start the President’s Day Weekend. The weather looks really nice for the long weekend – you may even see a bluebird day alert or two.

We could see some more natural snow – on the lighter side – at places like Snowshoe, Wisp, and Canaan. It will be a great atmosphere setter if you are able to be on the slopes this morning.

Conditions are going to be fan-freaking-tastic this weekend as the resorts refresh the slopes. There will be several lengthy snowmaking opportunities over the weekend, and we have seen this year what the snowmakers can do when they get the green light.

For the full details of this morning’s conditions, be sure to visit the Snow Reports page. Here is a quick snapshot of what you will find out on the slopes this morning.

North Carolina
App Ski Mountain – They are playing on nine trails with five lifts in operation. They have a 30-40” base with a packed powder surface.

Beech Mountain – Beech is reporting a 32-60” base with a packed powder and variable surface. They are offering 12 slopes and four lifts.

Cataloochee – Cat is skiing and riding on a 27-57” base with a groomed surface. They have 15 slopes with five lifts spinning today. Tube World is open.

Ski Sapphire – Sapphire is reopening with both slopes and both lifts open. They are reporting a 15-50” base. Tomorrow is annual Great Outhouse races – take a look at some of the rides that were featured in a Facebook post last weekend.

Sugar Mountain – It looked like a manmade blizzard at Sugar this morning. They will be playing on 13 slopes that are serviced by five lifts this morning. A 39-80” base with a manmade powder and frozen granular base.

Wolf Ridge – The Wolf is back in action today after the rain forced a temporary closure. With an 18-38” base with a groomed surface, they have seven slopes and three lifts in operation today.

West Virginia
Canaan Valley – With an inch of fresh snow on the ground, Canaan is playing on 23 slopes and four lifts today. They are reporting groomed and frozen granular conditions with a 15-30” base.

Snowshoe – Cheat Mountain magic struck overnight as the ‘Shoe got two inches of fresh snow. As of this morning, they are skiing and riding on 50 slopes with 14 lifts in operation and teased that they could open new terrain over the weekend. They have a groomed packed powder surface with a 45” base.

Winterplace – Winterplace is offering 15 trails this morning with six lifts in operation. They have a groomed and granular surface on a 24-40” base. The phone lines at Winterplace are out as of 9:15 this morning, and they advised to contact them via email until the issue is fixed.

Virginia
Bryce – Bryce remains at 100% open as they are riding on all eight trails with a 30” base with a frozen granular and groomed surface. They have five lifts in operation.

Massanutten – Massanutten is offering nine slopes with six lifts today. They have a26” base with a groomed surface. Rumor has it that Cupid will be celebrating by taking some turns today.

Omni Homestead – It is reopening day for the Hot Springs resort as they are playing on two slopes. They have an 8-12” base with a groomed surface.

Wintergreen – Snowmaking is going full blast this morning and they have closed a few trails for snowmaking today. They are offering 13 slopes with four lifts – but beware that could fluctuate throughout the day. Wintergreen is offering a 24” base with a groomed surface.

It’s going to be a busy day at Wintergreen.

Tennessee
Ober Gatlinburg – The second half of the season continues to be really strong in Gatlinburg. They are offering five slopes with a 15-35” base today with a groomed and frozen granular surface.

Over on Facebook, they gave us a quick video update of snowmaking operations.

Maryland
Wisp Resort – Snow is still falling this morning at Wisp setting for a picturesque scene. Wisp has 23 trails and 10 lifts open for the day, and they are riding on a 26” base with a groomed and frozen granular surface.

I hope you can get out and enjoy the weekend. Be sure to follow us over on social media for updates throughout the weekend.