And We’re Off To a Running Start

It has been a VERY good 24 hours for a majority of the ski areas in the region.  A handful of resorts have had the snow guns on continuously for 24+ hours now and it is incredible how much manmade snow has been layed down already.  The resorts in the northwestern portion or North Carolina made snow all day yesterday and last night.  Check out the 24 hour timelapse from Beech Mountain.

And to think, this is just the beginning.

In addition to the good news that is snowmaking, Sugar Mountain is back open again today (as I expected).  They are skiing and riding for both day and night sessions on 6 trails today.  The base cam out there shows drastically improved conditions.  I’d love to be cruising down Upper Flying Mile right about now!

While a majority of resorts have made snow in the past 24 hours, I might have gotten a little ahead of myself yesterday when I said that everybody would be able to do so.  A few resorts didn’t quite see cold enough temperatures last night.  Bryce Resort in Virginia, Sapphire Valley in NC, and Ober Gatlinburg in Tennessee are still playing the waiting game.  That game should end tonight though as those resorts should be able to turn on the snow guns.  I know Bryce was planning on waiting until tonight anyways (Thanks Bill!).

The only other resort I have right now marked as not making snow is Winterplace.  That is a little surprising as the temperature was in the 20’s out there this morning.  I could be wrong though.  Their base cam currently isn’t working and they haven’t posted anything to social media.  If somebody has any info about snowmaking out there feel free to email me!

How long will these snowmaking temperatures last?  Well, quite a while actually!  The next 10 days or so looks AWESOME and we’re going to see the cold temperatures stick around.  Even better, we have several shots at some natural snow.  I’ll let Brad Panovich discuss this in more detail with his latest video forecast.

I know it’s only a model, but that snowfall forecast map from the Euro by next weekend looks amazing.  If it pans out we’re going to be looking at some mid-season like conditions by next Saturday.  Just lovely.

We’ve had a few more opening day announcements since yesterday.  I feel like it’s a good time to go state by state and take a look at the current status of the resorts.  Let’s go! 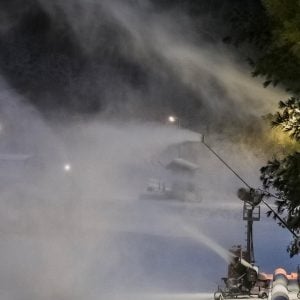 App Ski Mtn:  They are blasting away at the slopes right now.  It’s insane how much snow they have put down since yesterday morning.  They open this Saturday.

Beech Mountain Resort: You’ve already seen the 24 hour timelapse from out there.  Lots of snowmaking going on.  Look for that to continue around the clock.  They re-open this Saturday.

Cataloochee: They are making lots and lots of snow right now and should be able to continue to do so until they re-open this Saturday.

Sugar Mountain: One of only two open ski areas in the region right now.  They’re making snow around the clock.  Look for more trails to open soon.

Canaan Valley: I forgot to mention that they saw a trace of snow yesterday morning.  They’ve been making snow and open next Saturday, December 16th.  Should be fantastic conditions up there by then!  The picture at the top of this post was snapped out there yesterday.

Snowshoe Mountain: They’ve been open continuously for a few weeks now and things continue to look good up there.  Around the clock snowmaking should help.  They’re skiing and riding on 8 trails for the time being, but they should have some big increases in opening terrain in the coming days and weeks.

Timberline: Like Canaan, they open next Saturday, December 16th.  And like Canaan, snowmaking and natural snow in between now and then should make for some amazing opening day conditions by then!

Guns a' blazin' tonight on the mountain. One of us will put our boots on tomorrow and see if we can't give you a virtual ride around. Have you booked your cozy winter ski getaway yet? Timberline Four Seasons Realty will help you get ready! #YourMountainIsCalling#SkiforYourself#TimberlineWV#RealMenMakeSnow

Winterplace: As I’ve already mentioned, it’s been a surprisingly quiet 24 hours out there.  We’ll have to see what’s up with them.  Opening day is still to be determined.

Bryce Resort: Look for them to start making snow tonight once conditions allow for it.  Also, the expected opening date is either next Friday or Saturday right now.  Random note, they unveiled a new website today.  I’m liking it!  The snow report is right there on the front page.  Nice!

The Omni Homestead: The webcam out there shows snowmaking going on this morning.  Their opening date is still to be determined, but I’d imagine it’ll happen in a few weeks.

Wintergreen: Snowmaking commenced out there yesterday/last night.  They haven’t announced anything yet in terms of an opening date, but if I had to guess I’d say look for them to open next weekend.  I still need to get up there this year!

THIS IS ONLY A TEST! Check out this footage from our snowmaking tests this morning. It's almost time to turn on #SNOWPOWER!! #soon #wecantwait #wintergreenresortva

Wisp Resort: They started making snow last night, to the delight of many on Facebook I’m sure.  They also announced that they hope to open next Saturday, December 16th.  With their snowmaking capabilities and the weather forecast being what it is, look for them to have some awesome conditions by then!

Ober Gatlinburg:  Ober should be able to start making snow tonight.  Tubing is and has been open for a while now.  They have announced that they hope to have a few open slopes by this weekend, either on Friday or Saturday.

There is the very real possibility we could have every ski area, or at least a vast majority of them, open by next weekend.  Remember two years go when we had zero open ski areas at Christmas?  Yeah, me neither.  Let’s forget it.  This year’s holiday time period is shaping up to be one of the best in recent memories.  It’s going to be a December to remember!

Enjoy your Thursday people.  We’re one day closer to the weekend!