Observations from an Amazing Summit Weekend 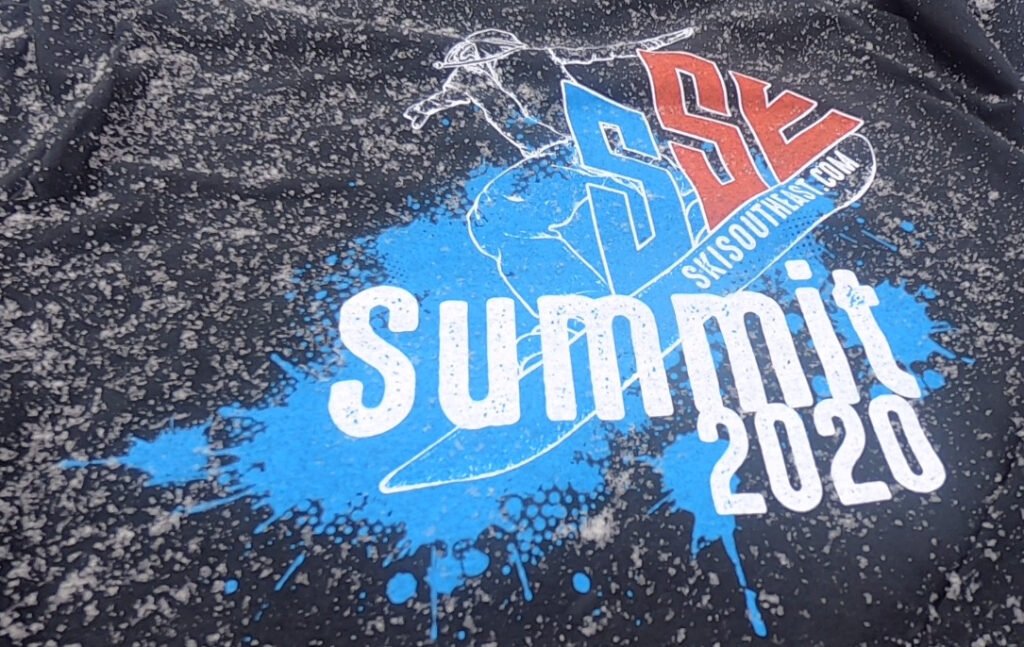 It was rainy first thing this Tuesday morning, so I am going to take an unusual angle on this post and carry on a bit more about this past weekend.

Man oh man what a weekend! It all began as I left the High Country as it was snowing lightly at my home this past Friday morning and I continued to witness light snowfall, though no real accumulations on my drive from the High Country of Boone, through Damascus, Virginia, up I-81 to Blacksburg to pick up my youngest daughter from Virginia Tech. After picking her up, we headed to Snowshoe and it wasn’t until  we hit Marlinton, West Virginia that the snow picked up. It had already dumped 6″ of natural snowfall on the Pocahontas County resort on the day before and while we were there we were blessed with another foot or so. I heard and saw reports of anywhere from 16″ to 19″ over the 4 day, multiple snowfall storm.

The forecast for this past Saturday was forecast to become partly sunny and while we did see a slight haze of the sun trying to peak through, what we got was another dumping of 6″ of snowfall!

Here’s where I need to inject a bit of an admission. I used to like skiing in deep snow. I fight the passing of time like a banshee, but I will have to say that over the years I have found that deeper snow just wears my legs out quicker – so I tend to prefer 2-3″ of powder on top of groomed snow. Over the Christmas break I skied several days at Snowshoe where the “deep snow” was very heavy, mash potatoes and it was, at times, more of a challenge that I was hoping to experience.

So when I heard that Snowshoe’s trails on Saturday were going to be mostly a foot of natural snowfall, I was hesitant. Ready as hell, but also ready for a workout. Good LORD was I wrong! Saturday’s turns for the morning runs were THE BEST that I have ever skied on the east coast…period. My skis were constantly covered by 8″-12″ of powder and it was totally effortless. That powder was every bit the champagne powder that is rarely seen east of the Rockies, but that we all hope for when we head to the slopes.

I honestly didn’t want to stop and head down to the Boathouse for the Summit Giveaways. (Being totally honest here.) The final tally was 181 people who sign-up to attend this year’s Summit and (125) of us booked (37) units through Snowshoe reservations, which were all records. We had a few additional guests and (43) Snowshoe homeowners signed-up to attend and to be honest – I THINK we had more people show up for Sunday morning First Tracks than we did at the Boathouse for FREE LUNCH and a ton of FREE hoodies, tshirts, beanies and more.

The temperature at lunchtime was hovering around 8° or so and the falling snow covered the new “Snow News is Good News” hoodies and Summit shirts, etc. It was snowing so hard and it was so cold that we had people running inside and out just to stay reasonably comfortable AND the conditions on the slopes were so fantastic – I can understand WHY the Boathouse gathering was a bit lower than we expected. We still had a good crowd of perhaps 60 or so die-hards who took part in free food and brews, etc. which was awesome. (Thanks again to the Boathouse crew for accommodating our wishes.)

It was really great to see so many first-time Summit attendees and I was happy to get to talk with a lot of you guys.

I really want to thank Shawn Cassell for coming and hanging out a bit with us and for prepping the Boathouse peeps that we were taking over the deck again this year. Thanks tons Shawn. As usual, you rock. I have to add here that Shawn was dedicated to help out by even driving down that deep, snow-covered trek to the bottom  of the mountain to provide some tables for us as well.

Trust me, that road was fun!

Saturday was one of those special days on the snow that you hope to get often, but rarely see materialize. It was indeed EPIC, or as Shawn Cassell keeps reminding me – IKON-ic. (Little pun there.) It has been four years or so since I was able to play in that kind of powder at Vale Resort and to be totally honest, that snow was waist-to-arm-pit deep in some of the bowls, so I truly enjoyed the day at Snowshoe on Saturday even more.

…and as awesome as that was…

Sunday morning, we woke up to crystal, blue skies, temperatures of around 14° and slopes that were perfectly groomed to corduroy perfection. Thanks to Shawn Cassell, Preston Cline, Rossi Bob, Susan and the rest of the Snowshoe management and ski patrol for making Sunday morning’s First Tracks almost as EPIC (I mean IKONic) as Saturday’s turns.

As I mentioned before, we had our largest crowd ever for First Tracks and as I also mentioned, during the Saturday Boathouse meet-up Ski Patroller, Rossi Bob shared that First Tracks rope drop would be AT 8am. So we had probably 40 or so show prior to or AT 8am and then a large number shuttled in at the previously announced 8:15am time. Rossi Bob and crew estimated perhaps 80-85 people made it for those amazing turns.

By the way, I should also thank Snowshoe President & COO, Patti Duncan, Heather Ransom and to all of you – thanks so much for accommodating our crowd and providing the hook-up that you do for us.

Snowshoe was hosting some races going on the Widowmaker trail so that was not available to us Sunday morning and Sawmill was not yet open, but I don’t think anyone was complaining as we made laps for a solid hour alternating between my favorite trail, Camp 99 and the Upper Flume to J Hook slopes. I have to tell you that Upper Flume and J Hook actually had some nice rollers on it and it was so perfectly groomed that I opened up and cruised with all the speed my skis had in them and it felt very much to this non-pro as if I was making turns down a not-so-giant slalom run. I caught and felt several fall lines down that slope, which is something I had not appreciated out of that little trail in past trips to Snowshoe.

Of course, Camp 99 has enough drops on it to create a ton of speed and the wide-open slopes and perfect corduroy was sweet. After a free hour on the mountain I headed over to do another favorite – Skip Jack – and while it did not provide the amazing powder of Saturday’s turns, it was equally amazing with equally groomed “cord”.

I ended up doing 11 treks down Snowshoe on Sunday from 8am-10am and then I had to do the thing that is always a bummer for me – pack it up and hit the road.

I can’t tell those of you who were not able to attend this year’s Summit Weekend, what you missed. I can’t put it into words. It was simply “one of those weekends”. I was talking with Rossi Bob, Shawn Cassell and Preston Cline and all of them (at one time or another) mentioned how much THEY liked our event and “what a great event it always is”. We also shared intel that of the thirteen SkiSoutheast, Snowshoe Summits that we’ve held, we have had some natural snowfall on ten of those weekends. They all made it very clear that we are always welcome at Snowshoe – as long as we continue to “bring the snow”.

Thanks to my staff for helping a ton. Lisa Clough and husband, Ben helped out a ton as did Nina Breed, Lindsay Robles, Matt Laws and Kenny Griffin. I have to add in a special thanks to my wife as she is an amazing trooper. It was awesome to have my friend and awesome meteorologist Brad Panovich there and it was great to see contributing writers Brian Dix and Rudy Ryback come and hang out. Sorry we didn’t get to make turns together.

Sidenote: Word has it that Rudy drove up from Asheville Saturday night and slept in his CAR to make First Tracks with us! Dang, Rudy – you have to tell someone when you’re coming! You could have slept on our sleeper sofa. Man it had to have been cold out there Saturday night!

Thanks again to ALL of you who shared your time with us and who paid a significant amount of your hard-earned money to come and play with us for three days and two nights.

It truly WAS EPIC – sorry Shawn!

Lots of Snow Fell Across the Region Over the Weekend

…and AS USUAL, we have all of those snowy number shared on our Snow Report page. All the numbers you see on that page are accurate numbers that are supported by all of the ski areas in our region…except one.

It WAS great to see 8″ of natural snowfall reported atop Beech Mountain, Thursday through Saturday and the 17.4″ of snow at Canaan Valley Resort HAD to have been awesome as well. I am going to be at Canaan Valley Resort this coming weekend and the forecast right now is for cold temps and more natural snow. It should be another great weekend in the Southeast and mid-Atlantic.

Interestingly, I have not heard from one person this season who has challenged us on the numbers we continue to share. I have received a lot of emails thanking us for “no bull reporting” and for keeping it real.

I would also like to thank more than a few of our readers (who are more of a weather guru than I would ever claim to be) for your intel. In addition to having volunteer snow reporters in various locations, we’ve also been sent numerous and helpful links that actually share exact snowfall totals for Sugar Mountain at top of mountain elevations.

Also, I continue to say “shame on a local weather guru” who is trying to report and claim that Sugar has had 20″ more snow than Beech this season. It’s just not a good look guys. Anytime it snows, I challenge anyone to drive to the top of Sugar and then drive to the top of Beech and every-single-time, you’ll see as much or more snow on Beech Mountain.

For the record, we are reporting 46.5″ of snow for Beech Mountain Resort verses 42.5″ at Sugar Mountain Resort this winter. Sugar is over-reporting natural snowfall this season by 17.7″. Both are off significantly from a normal/average snow season.

Previous Post
Best of Social Media from the Ski Southeast Summit
Next Post
Some Sweet, Top to Bottom Runs at Snowshoe Mountain from Summit Weekend.