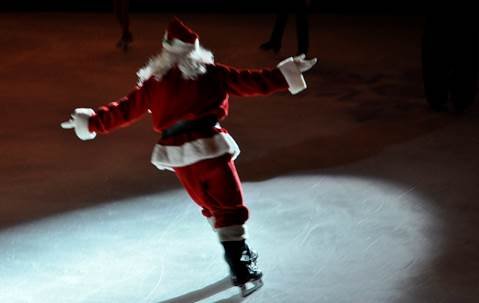 Christmas on Ice hosted by Ober Gatlinburg- Free to the Public

One of Gatlinburg’s most colorful and spectacular shows of the holiday season has scheduled performances for Saturday and Sunday, December 6th and 7th, and it’s free!

The indoor ice Skating Rink is the centerpiece of Ober Gatlinburg’s 62,000 square foot facility on Mt. Harrison at the top of Ski Mountain Road. The ice rink, carousel, scenic chairlift, alpine slide, aerial tramway, shops, restaurant & lounge, and Wildlife Encounter with bobcats, river otters, birds of prey and nocturnal house are all open year round, while the live black bear exhibit is open spring through fall months. Snow tubing is now available and snow skiing/snowboarding will commence as soon as a proper snow base can be maintained on the mountain.

New for the 2014/15 Winter Season is Yeti’s Run, Ober’s first new run since 1987. The advance rated slope will split off to the East from the top of the Black Lift, taking skiers and snowboarders down a 635′ run that is 45′ wide. The new run reconnects with Mogul Ridge, Grizzly or Upper Bear. Yeti’s Run has snowmaking capabilities and will be equipped with lights for night skiing and snowboarding. Ober continues to add terrain features, snow making equipment, and facility upgrades to improve the guest experience. For more information contact Ober Gatlinburg at 865-436-5423.