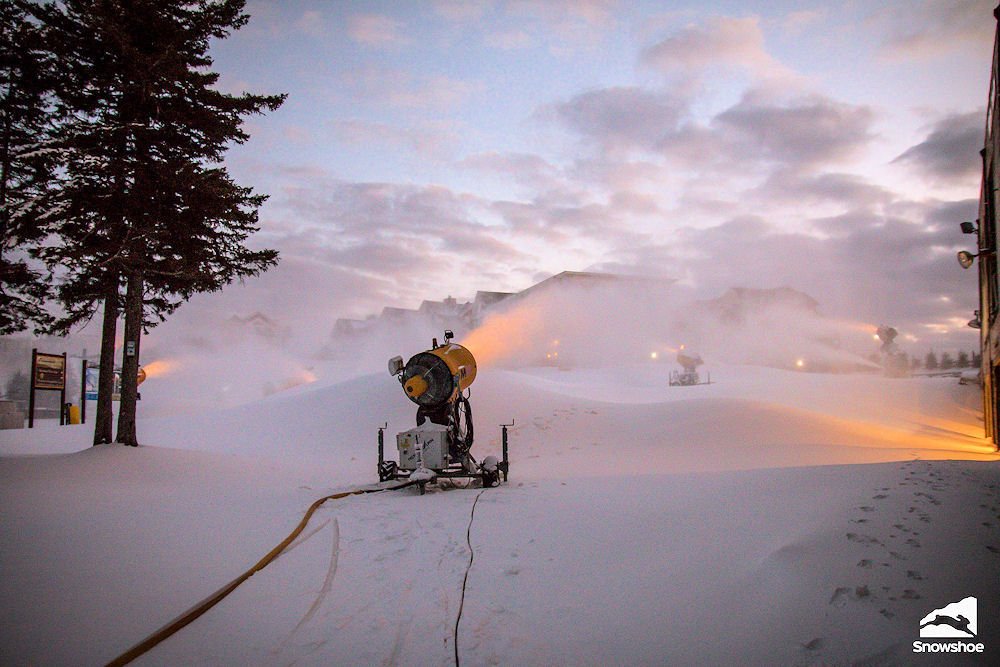 The calendar says that the official first day of winter for the 2016-2017 season won’t happen until 5:44am on Wednesday, December 21st, but for all 17 of the member ski areas of the Southeastern Ski Areas Association – the first day of winter is TODAY, December 8th at WHATEVER time their respective snowmaking crews are able to start blasting their slopes.

For some ski areas – today or tonight will be the first time they’ve done so. For others, Thursday will be an unofficial “restart” to the season although in reality any skiing and snowboarding that has happened from November 1st until now is what most industry pros call “bonus skiing”.

That all comes to an end sometime later today as the first, real, extended round of winter-like weather should dive temperatures down to quality, snowmaking temps that should last AT LEAST through the next ten days.

The COLD HAS ALREADY HIT SEVERAL SKI RESORTS THIS MORNING!

We’re getting some reports of light snow flurries this morning here in the High Country and around the area. 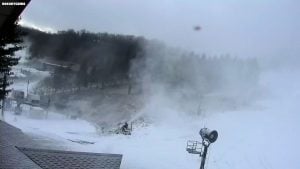 Beech Mountain Resort is reporting 24° at 8am and they are blasting the slopes to a degree that there is a manmade WHITE OUT up there! Temps are forecast to dive down to 9° overnight tonight and then not rise above snowmaking temps until perhaps some time on Sunday and MAYBE not until Tuesday. 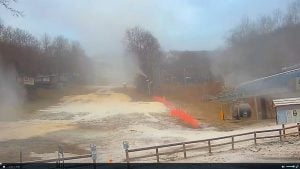 Sugar’s base area will be transformed prior to tomorrow’s opening. Click to Enlarge!

Sugar Mountain is reporting 24° and they are now making snow on all portions of their mountain and they are reporting that they WILL be open for skiing and snowboarding on FRIDAY. They have a LONG way to go to lay down some snow and open but just watch the LIVE CAMS and you’ll be amazed at how things look in less than 24 hours!

Appalachian Ski Mountain, Cataloochee Ski Area and Wolf Ridge have not seen the cold temps invade those areas just yet so there is no snowmaking there…but that will change later this afternoon. So right NOW Beech and Sugar are the only ski areas making snow in the Tarheel state. 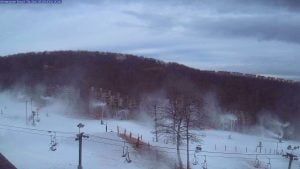 Wintergreen Resort looks GOOD for their opening NEXT weekend. Click to Enlarge!

As we look further north into Virginia – only Wintergreen Resort is making snow this morning as temps have not dropped enough yet at Bryce, Massanutten and Omni Homestead. Again that will all change later today, however as of 8:30am, Wintergreen Resort is reporting 27° and they look READY to open although their planned opening date is December 17th. 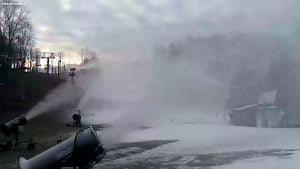 Winterplace is blasting their OWN manmade WHITE OUT this morning

As we travel further up and through the tunnels on I77 into West Virginia we first come to Winterplace Resort and they are blasting the slopes with their OWN manmade WHITE OUT right now. Winterplace was planning on opening December 10th, but that may be put off for a day or so. They have taken that information off of their website. We’ll be talking with them later today and provide an update asap.

SNOWSHOE MOUNTAIN RESORT – 20° and making snow. They are not reporting the light dusting of snow that fell overnight but that adds to the ambience. We probably SHOULD have talked about Snowshoe FIRST as they ARE THE ONLY ski resort open in the entire region. They are operating with 9 slopes and trails and groomed and variable conditions. Look for more slopes to open almost DAILY now. 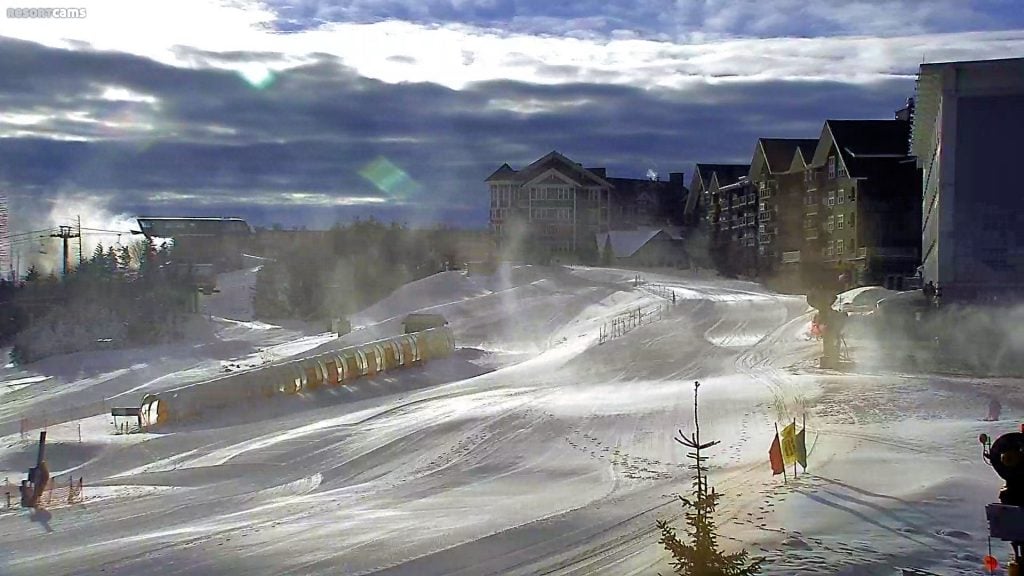 Snowshoe Mountain is the ONLY ski resort open today. Click to Enlarge to see top of the mountain.

Timberline Resort – 22° and making snow and they will open December 16th.

THAT NOTCH OF MARYLAND THAT SHOULD BE WEST VIRGINIA…

Wisp Resort – has a new website! Woohoo. Awesome to see. They are reporting 27° this morning and STILL NO SNOWMAKING. That will get the natives restless. They will most certainly crank up and blast the slopes later today with plans to open December 16th. (That is a new date…)

Wolf Ridge Resort  is not making snow just yet but they are still reporting that they plan to open this weekend. We may see that date pushed back a couple of days as the slopes are almost bare at this time. 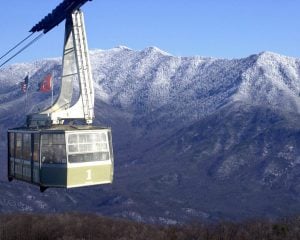 Bear in mind that the City of Gatlinburg is STILL CLOSED as of today. They will reopen the city tomorrow to residents and tourists.

Kate Barido, Director of Sales & Marketing for Ober Gatlinburg shared this with us this morning:

GATLINBURG, TN. December 8, 2016— After what will be a 10-day recovery period from the devastating wildfires that swept through Gatlinburg, Ober Gatlinburg will reopen in two phases. On Friday, December 9, Ober Gatlinburg’s Downtown Tramway Mall will be open from 9:30 am – 6:00 pm. This will include the Ski Mountain Grind Haus Coffee Shop, LeConte Deli, Tramway Gifts, Mountaineer Candy Kitchen, Silver Galleon, Miss Sadie’s Old Time Photos, Spa To Go, and the Green River Gallery.

Ober Gatlinburg would like to thank the all of the firefighters, first responders, disaster relief workers, city employees, utility departments and volunteers who continue to work tirelessly to save our town. The outpouring of relief and support our community has received is unprecedented and appreciated.

That’s going to do it for us for now. If we see some snow falling, we may update you guys with a photo, etc. Until then email me if you like at: [email protected]

Previous Post
Check Out this “Behind the Scenes” Terrain Park Maintenance Video from Snowshoe!
Next Post
Ober Gatlinburg Plans to Reopen After Smoky Mountain Wildfire