READY OR NOT, HERE IT COMES… 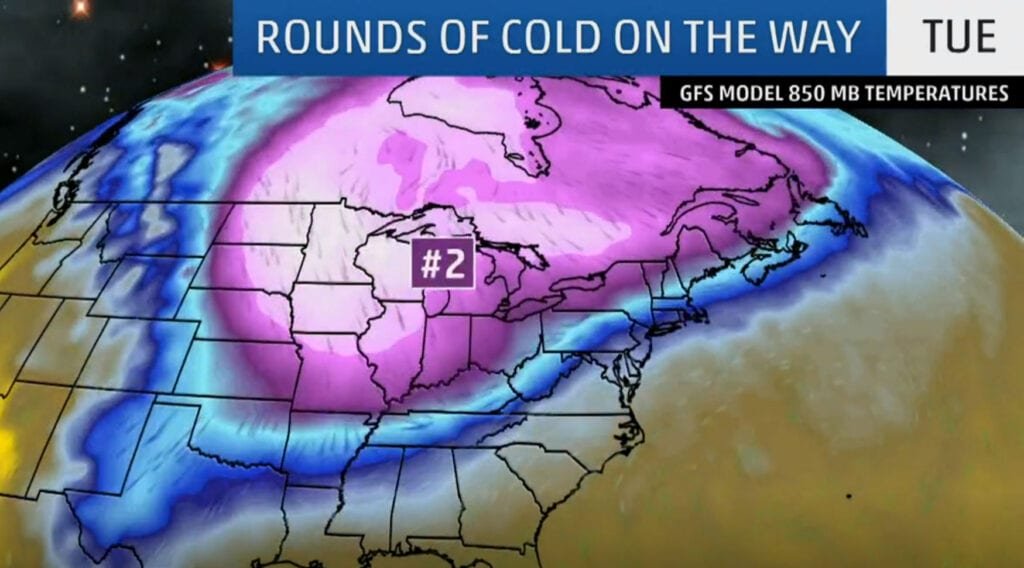 Before I get into the cold fronts that are pushing this way, I have to share that yesterday I was over in east Tennessee’s Watauga Lake, to get my jet skis out of the water, winterized and stored for the winter and I got a bit of a surprise. First, bear in mind that Wednesday was a gorgeous day in the neighborhood as the high over there was around 68°, with blue skies and no wind.

The surprise is that I ‘caught’ two of the area’s resort management/owners (one manager, one owner) paddle boarding. I know, I know…photos/videos or it didn’t happen. However, I have to just leave it at that because one of them is a great friend and he p-r-o-b-a-b-l-y wouldn’t appreciate me mentioning his name or sharing a photo without me first asking. (Over the years I’ve learned to be a little sensitive with peeps’ private time.)

So last week we had a bit of a tease with cold enough air to create a dusting of snow at Snowshoe Mountain, Cataloochee, Beech and Sugar Mountain (where each were also MAKING SNOW). As hard as they tried Sugar Mountain lost the battle to ma nature and just didn’t have the consistently, well-timed cold temps with which to make enough snow to open as they had planned either last Saturday, Sunday or even Monday.

Cataloochee Ski Area WAS able to make enough snow to open this past Sunday, if for only one day of fun on the slopes and I can tell you that plenty of first day riders enjoyed it. (Good on Chris Bates and his crew for making that happen.)

Beech Mountain Resort and Snowshoe Mountain also made snow, however, that was simply to get started with snowmaking ops for later opening days – later this month.

That was THEN. This is NOW!

However, several other industry professionals have already chimed in and it looks like we’re in for some REALLY cold air. Depending on the timing and voracity of our snowmaking crews – we’ll probably see Saturday skiing and snowboarding at Cataloochee and Sugar Mountain this weekend. (There’s an outside shot at around-the-clock snowmaking beginning later tonight/Friday early AM.)

So THAT is great news for those of us who are prone to love any temps that are sub 32°.

I was out at lunch an hour ago, hitting some golf balls at the local driving range with temps around 62°. As I was driving back to my office, the temperature was already dropping and light rain was hitting the area.

The cold front that moves through tonight will bring lows down to around 25° in Banner Elk and parts of the High Country. Cataloochee should see lows around 27-28°. Snowshoe Mountain (the other ski resort in the process of making snow already) will see a low of around 15°. YEA, 15°!

That will be PERFECT for the snowmaking crews to hit the slopes hard. Expect to see some ‘whales’ appearing on your favorite ski hill.

The forecasted HIGH for Snowshoe, WV on Friday is 25° and Sugar and Beech Mountain should see highs around 31° or so.

Again – that should mean around-the-clock snowmaking and when our snowmaking crews get THAT kind of window of opportunity, they can get slopes open in 18-24 hours. So, again, unless something really screwy happens, I’m expecting to see snowguns crank up after midnight tonight, hamming the slopes until sometime late morning Saturday morning with the highs are expected to rebound a bit to around the low 40s in Banner Elk and 37° or so at Snowshoe later in the day on Saturday.

So SATURDAY may be a stellar day to get first chair at Sugar and ride for the second day of ops at Cataloochee Ski Area in Maggie Valley. I will personally be attending the South Carolina / App State game and tailgating with 20-25 of our friends from both schools. But I will no doubt be logging in and watching the LIVE CAMS.

(Be sure to stay tuned to the SNOW REPORT via SkiSoutheast.com and watch the SKI CAMS at ResortCams.com to see it all LIVE, from the snow guns firing up (again) to people hitting the slopes.)

MORE ON THIS ROUND OF COLD AND WHAT’S RIGHT BEHIND IT!

Depending a bit on the timing as it turns colder after midnight there’s enough moisture to leave a few snow flurries for many of us and some high elevation snow showers focused on the westward facing slopes nearest the TN/NC border. So that will be a welcome bit of ambiance.

THEN…IT GETS EVEN COLDER!

Things are forecasted to moderate a bit Sunday and we should have a nice day on Veteran’s Day (Monday) but then sometime during the day on Tuesday we should see some AM to lunchtime SNOW SHOWERS at the mountaintops. Light snow ends late Tuesday night or early Wednesday morning followed by the core of cold air which would get our attention even if it were January.

The thinking right NOW is:

Don’t know if you guys caught that last sentence, but even after this burst of cold air…we may have more cold hitting.

So as I started this post, I’ll end it the same way; ready or not, here it comes!

Be sure to check back tomorrow morning for Brad’s Winter Forecast.

I’ve got tons more to share as we too will be cranking our machine up a bit more.

SOME STAFF TWEAKS…WANT TO JOIN OUR STAFF?

Rudy Ryback did an awesome job for us last season in handling the Snow Reports and FirsTrax news each morning and the plan as late as the other day was to keep that going. However, we feel we can share a lot more from Rudy as he hits the slopes 2-3 days a week all season long. So we have realigned our crew a bit and Matt Laws began doing the SNOW REPORT and FirsTrax news yesterday…and he will be THE MAN Mon-Fri. I will be handling those duties on Holidays and Weekends all season long.

That allows us to incorporate Rudy more in the same vein that David McCue occupied last season as Rudy will share some photos, videos and stories each week as he visits various resorts.

Kenny Griffin, Joe Stevens, Brad Panovich and I will be doing our thing and contributing throughout.

WANT TO JOIN OUR STAFF? 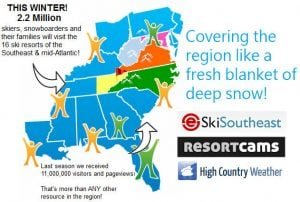 We want to recruit another couple of snow-loving souls to contribute with photos, videos and stories from around the region. Our coverage area is from Wisp Resort in Maryland, through all of the ski mountain in West Virginia, Tennessee, Virginia and North Carolina.

If YOU love skiing or snowboarding and you’re already going to be on the snow this season, this could be a great fit. Requirements are pretty straightforward:

1. Must have a better-than-average ability to write. This IS supposed to be entertaining!

2. Must have your own means of transportation, ski or snowboarding equipment and the ability to post stories, photos and videos from around the region. We are most in need of people who can report on and from:

While we have great resources in these locations – we want more!

If you are interested in learning more, email me your name, cell phone # and any input you can provide to: [email protected]

I’ll buzz you and who knows? You may be the next member of our growing team!

(Thanks to THE WEATHER CHANNEL for use of the photo for our story. You guys rock and we appreciate your team’s use of our many webcameras as well!)