Not Much, But Some Snowmaking This Morning 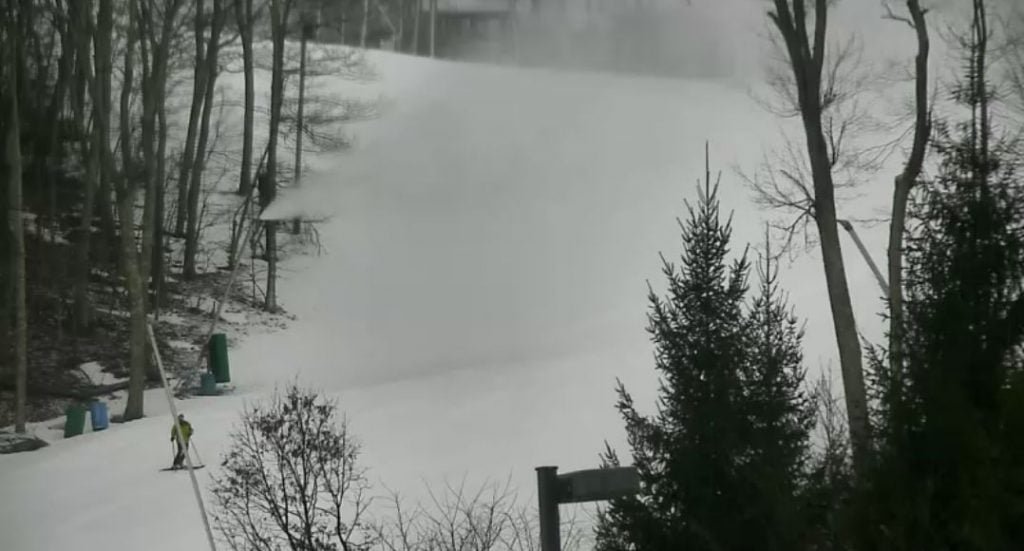 Well, the weather this morning isn’t as good as I was hoping.  It’s cold enough at the surface for snowmaking but a pesky warm nose aloft created some drizzle and freezing rain for many of the resorts.  The sound of snow guns can be heard at a handful of resorts though the further north you go.

I was pretty optimistic yesterday that we would see widespread snowmaking this morning.  The NWS forecasts showed overnight temperatures that were cold enough to make snow for a majority of the ski areas and admittedly I didn’t do a complete look at things.   I woke up this morning to the sight of rain drops on many of the webcams, mainly in NC, and I got a little bummed.  Temps were cold as it was in the 20’s at Beech for instance, but a layer of warmer air aloft was making for a messy start to the day.  You can see that warm nose on the temperature profile for Boone, NC below.  That red diagonal line is the freezing mark and the curved red line to the right shows above freezing temps a few thousand feet up.  No bueno.

Go up into Virginia, West Virginia, and Maryland though and things were more conducive for snowmaking.  Snowshoe, Canaan Valley, Massanutten, Wintergreen, and Wisp Resort all were able to make snow.  Canaan made snow most of yesterday actually I do believe.  Below is a shot form Massanutten this morning where they had the guns going.

You can see in that shot that it’s actually sunny up that way.  It’s one of those mornings where the weather is drastically different across the region.  In the southwestern part of North Carolina, Cataloochee is currently socked in by fog while the Davis, WV area, where Canaan and Timberline are located, is experiencing a gorgeous morning.

The week ahead still looks to be on the mild side, especially after today.  Brad Panovich sent in his latest forecast and he must be bummed like the rest of us as it’s a very brief look at things.

Mild and wet is the name of the game for most of the work week but as I mentioned yesterday it looks like we will see things cool off for the weekend.  The forecast doesn’t look quite as cold for the weekend today as it did yesterday, but many resorts should be able to eek out some snowmaking if the current forecast holds and some light snow for West Virginia would make for a nice start to the long weekend.  Let’s hope that holds true.

For the most part, snow conditions are still holding up nicely.  We do have a temporary closure though as Wolf Ridge made the call to stay closed today due to the weather.  Hopefully they can get back open ASAP but it wouldn’t surprise me to see them stay closed for another day or two.

Even with the weather forecast being what it is for the week ahead, there’s still a ton of snow on the slopes and the groomers will push it around to smooth things out.  Mike posted an article a few weeks ago about snow farming and how it’s essential for ski resorts in the region to survive.  This upcoming stretch is a prime example of why. #thankasnowmaker

The extreme cold of January and February seems like such a distant memory right now, but winter is far from over.  As Panovich said, it’s a bump in the road.  For now though, let’s enjoy what we have!