Ladies and Gentlemen I would like to introduce you to a true friend of ours who has not quite been himself lately. He’s obviously suffered a bit of trauma and he’s been admittedly shy about being around people right now. We’re hearing some talk that he’s making some progress and potentially could return to 100% of his former self.

May I introduce you to – WINTER…or at LEAST some semblance of it!

It took me until around 10am this morning to get the snow reports updated for all of the ski resorts because I was having some kind of technical blip – both with my trusty SkiSoutheast laptop and with our main ski network servers. It was odd to say the least since my laptop is here on my kitchen table in beautiful Sleepy Hollow, North Carolina and my network servers are in Dallas, Texas.

I was excited to be post this morning since there’s some NATURAL SNOW to report…and LOTS of cold temperatures that allowed for snowmaking guns to fire on Saturday (at various times around the Southeast and mid Atlantic). Snowmaking is STILL happening as of 10am this morning at numerous locations and that is building base. 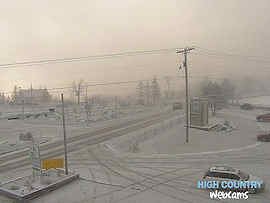 <This nice shot from the Beech Mountain Parkway showed a light dusting of snow. Everything is WHITE this morning.

ONE LITTLE PET PEEVE TO ADDRESS

I’m not sure if a bunch of ski area management peeps discussed this preseason or if one or two just started doing this and the rest are following to "keep up" but I’ve seen several reports already this early into a very challenging season where ski areas are reporting "Packed Powder" conditions. When those reports come after a nice snowfall, that’s understandable.

However I’m seeing it a lot this season after two nights of snowmaking on some warm trails. There ARE some ski areas that saw 2-3.5" of snow last night and this morning and you’ll have to click over to www.SkiSoutheast.com to see where that happened. However manmade snow does not constitute "packed powder" conditions. There is no question that our ski areas make a quality-grade snow and if we’re talking about "manmade powder" I can kind of go along with that, but "packed powder" – not so much.

My buddy, Joe Stevens began complaining about the usage of "manmade powder" a couple of years ago and I have to admit that I didn’t see the harm in the terminology because the snow that these new, high-tech machines lay down is a pretty nice powder when conditions are right. However, it doesn’t measure up to what most diehard snow enthusiast consider to be "powder".

I didn’t see the harm in the usage of the term "manmade powder" when the resorts made it…until now that MANY seem to have introduced "PACKED POWDER" as a followup after a day or two of making "manmade powder". To make matters even more confusing, many resorts aren’t even adding in the prefix of "manmade".

That said, we are not reporting "PACKED POWDER" unless it’s God’s version.

A TRACE of light powder fell at the highest elevations at Sugar and Beech.

MORE IMPORTANTLY, all of the ski areas saw COLD temps and made snow and as of 10am this morning App, Beech, Cat, Sugar, Wolf and Sapphire were still making snow.

It’s been such a weird start to the season that we’ve just reported what few resorts and slopes were open thus far. As of today, there’s enough going on that we invite you to CLICK OVER TO WWW.SKISOUTHEAST.COM for more information and to see where up to 3.5" of snow fell last night!

Want to know what a crazy early season it has been thus far. Consider that Snowshoe and the WV ski areas have seen as much as 36" of natural snow this season and some are still not open. Consider that THE MOST natural snowfall at a North Carolina ski area for this season is Beech with 9.1" of snow and yet Sugar and Cataloochee have been open at least every weekend since November 11th.

We have a LOT more news and interesting "SNOW MAINTENANCE" stuff to talk about if you want to click over to SkiSoutheast now. Otherwise, here’s the North Carolina snow news:

Appalachian Ski Mountain – 23° – Made Snow – 7 Trails Open with a base of 10-20". Open for night sessions tonight as well and they are offering ice skating as well.

Cataloochee Ski Area – 29° – Made Snow – 8 Trails Open with a base of 22-40". Open for night sessions tonight and they have tubing available as well.

Sugar Mountain – 19° – Made Snow as well as a TRACE of natural snow – 7 Trails Open (to the top!) with a base of 6-30". Open for day and night sessions and ice skating is open as well. No snow tubing today.

Sapphire Valley – 28° – Made Snow and hoping to open their Frozen Falls Tubing Park Monday and get the slopes opened before Christmas.

Wolf Ridge Resort – 29° – Making Snow since 5pm Saturday evening. None of the cams are working anymore and not much is happening in terms of communicating their plans.

Email me your comments, thoughts, photos, vids or anything else you like. [email protected]

Previous Post
Beech Mountain Shows a Little Snow this Morning! Photo from the Beech Mountain Parkway Cam!
Next Post
One to Three Inches of Snow Fell at the West Virginia Ski Resorts and Snowmaking is in Full Force!