NO TIME TO STOP NOW 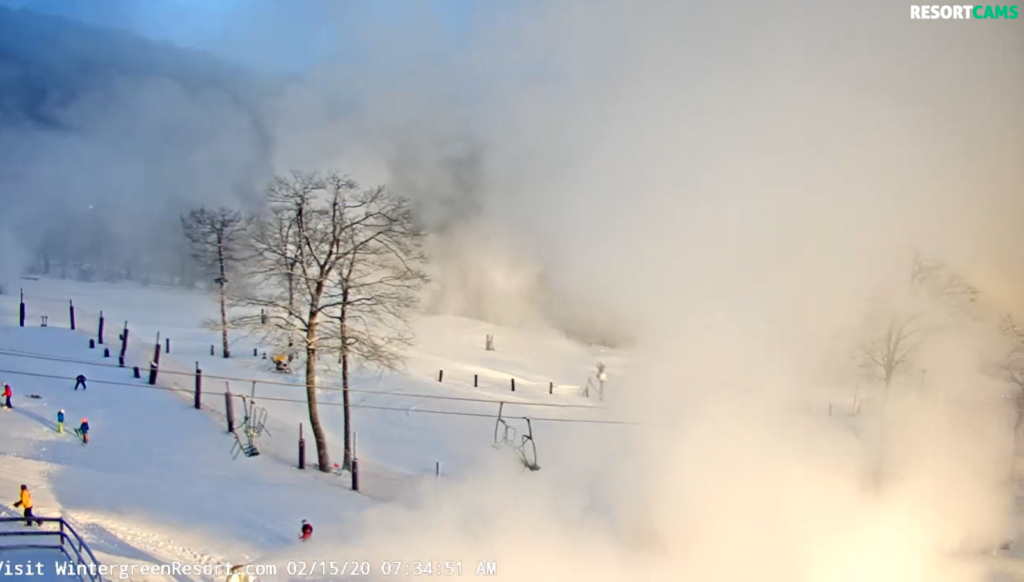 A couple of columns ago I mentioned that it was tough to think about skiing and snowboarding when the daffodils were popping through the ground in our front yard. I have to admit though, it’s been enjoyable this winter running outside without a face mask on, but it is winter and well, it’s supposed to be cold.

While I was taking my weekly trip to Winterplace overseeing the Hurricane High School Ski Club, a comment was made to me while the temperature was in the low 20’s and two inches of fresh snow was covering the slopes, “where was this weather in January.” Well we are now in March, and thanks to the latest, somewhat prolonged cold snap, we are enjoying the best conditions of the season.

So, let’s some inventory on the situation right, many of you have put off hitting the slopes, because it just hasn’t been to your liking or you kept waiting for the correct time. Well folks, I am here to say, with a first-hand account, the time is now. As Mike Doble has mentioned in recent First Trax columns, don’t worry about the base depths and please don’t use them for your decision making, because I am here to say some of those are ego measurements. I’ll get into that another day, but right now just pick your favorite resort and go, the water is frozen, and the conditions are great. Easily the best the conditions of the year.

As I wrote about a couple of weeks ago, the snow drought that the region is experiencing this season is taking its toll, with skiers and snowboarders thinking there just isn’t enough snow on the slopes to have fun. Well this past week, when Mother Nature finally dropped some velvety white stuff on the slopes, you could tell folks were either listening/watching the weather forecasts or just checking out the webcams, because you headed to the mountains. For those of you who took advantage of the situation, good on you. For those who couldn’t make the trip, hey, it’s not going anywhere, and you still have time.

While we are on the subject of slope coverage this week, let’s talk about snowmaking right now. I have heard the complaints about the lack of certain trails not being open this season, which you can basically thank Mother Nature for that lack of coverage. I mean if the temperature is above freezing, well things just can’t happen, things like natural snowfall or snowmaking. Folks, I am here to say this isn’t brain surgery, just plain facts. Do I wish it had been a bit colder this winter, sure, but it’s weather and unless you know something I don’t, you and I can’t change it anytime soon.

Now let’s talk snowmaking a little bit in detail, as I have said many, many times before, if it wasn’t for snowmaking, there would be no ski season in the southeast. So, when I again heard some comments, questioning the reason for the snowguns on, while the slopes were open, I asked an easy question, do you want to ski in March? Then they have to take advantage of temperatures during the day in the low 20’s. This is probably going to be the last snowmaking push, so tighten those goggles, pull up the facemask and let gravity be your friend.

As everyone should know, usually after that first big snowmaking push of the season, all of the resorts do their best to only make snow at night or on trails that are closed for the day or night. But this has been one of those seasons that has driven all of the mountain operation directors crazy. I was kidding one operation guy the other day that he can ask the power company for a refund on the power they used to make the snow that will be left over at the end of the season. Since this is a family style column, I am sorry, but I can’t repeat word for word what his response was to me. But if you have ever been behind a horse, well I would be what you were seeing in front of you.

I guess what I am trying to get across is that we all know this has been a trying season for everybody related to the industry. Just when we thought it was time to be able to add terrain to the slope count, the temperature climbed, and the rain came, and the process had to start all over again. Hey, hats off to the crews that have been able to get and hold the majority of their slopes open through this season.

For the most part I think the majority of the skiers and snowboarders in the region realize that when things are good, they can be very good, but when things are challenging, well you get a season like we have experience this year.

Okay it’s March and that traditionally means it’s spring skiing time, a time when the raccoon eyes start popping out and not so smart skiers and snowboarders don shorts to have fun in the sun. Let’s just hope all of the recent hard work by all of the snowmakers in the region is going to mean a fun spring skiing season. Other than opening day, getting out on the slopes when the sun is straight above, can make for a great experience for any skier and snowboarder willing to make another trip to their favorite resort.

So, I will leave you with this parting thought the next time you say that it just isn’t worth to make the trip. Hey, there has been a lot of work to get the slopes that are open in the shape that they are in, so it’s no time to stop now, time to make some turns.

Previous Post
What a Weekend it Has Been; What A Sunday it Will Be
Next Post
Best weekend of the season; We couldn’t have timed the Summit any better.