No Acorns Yet; However the Shooting Stars were Plentiful! 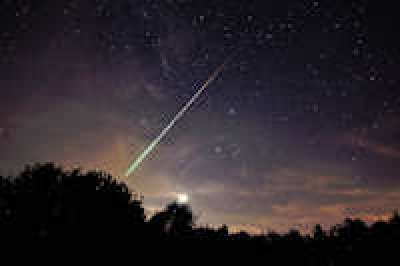 Things are beginning to "warm up" around the ski industry circles, while the temps are cooling down. I was at the lake Saturday evening around 10pm or so and after a full day of cloudy skies and cool temps – the skies cleared to reveal a veritable planetarium above us. I had not previously known about the Lyrid meteors or Perseid activity that was to peak that evening. I was simply doing what many of us do out on the lake in the evening – I was staring up at the stars. Out on Watauga Lake when it gets dark, it gets REALLY dark as there are no city lights to blur the skies. The stars light up and on particularly clear nights you can even see the Milky Way with your naked eyes.

Saturday night was one of the clearest evenings I’ve witnessed as there was a crescent moon and perfectly clear skies. I wasn’t out there chillin’ for more than two minutes when the coolest shooting star streaked across what I would estimate to be a third of the night sky! I reacted automatically with a loud "WOW" as the star literally did a slow burn out across the sky. My first thought was to make a wish. I chuckled at my own thought. Then before my thoughts turned to anything else – another one fell through the atmosphere. It was much less spectacular, but no less cool to witness.

At that moment I yelled to the kids inside the boat and they all came out on the back deck and we watched for mere moments when one after another over the next 45 minutes burned across the sky. Many were impressive and all of them evoked oohs and ahhs from all of us watching. After about 45 minutes we turned in because we were all tired from a full day of lake fun AND the fact that it was the coolest evening of the summer. Cool enough to drive us inside.

The next morning I googled "shooting stars in August 2012" and saw the articles providing the fact that Saturday night was indeed the peak night to watch for them. What I was disappointed to also find out was that we only saw the first, SMALL portion of the display. From 2-3am Sunday morning was the REAL SHOW with more than 60-100 meteors per hour spotted!

THAT would have been awesome. As I understand it, even though the peak viewing period has passed – you CAN STILL see perhaps 40 an hour in the pre-dawn skies tonight and for another night or so. We get some pretty clear skies up here in the mountains and without the city lights to dim the skies – we can often see some heavenly observations. I should have known that well-known, master photographer, Todd Bush of Banner Elk would be ready and armed with some powerful equipment to capture some of God’s natural ‘fireworks’. 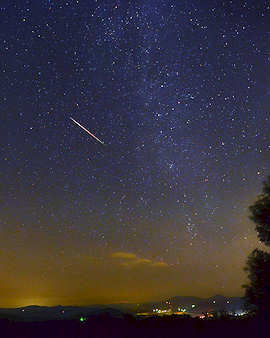 We’ve included a couple on the "Photos of the Day" so be sure to click HERE to see those. The coolest one was that of a meteor falling with the town of Banner Elk in the bottom of the image. I’m on the board for the Banner Elk Chamber and I intend to put forth a recommendation that we pay Todd to use that image with the caption, "Even the heavens fall for Banner Elk" as a tourism poster. They probably won’t go for it…but it’s a thought!

NO ACORNS BUT FALLING STARS MEAN SNOWFALLS? I think we’re all reaching for a sign of a great winter to come.

I cut my grass the other day and in a portion of the yard where acorns begin to show around this time of year – there are none. Perhaps it is too early. Hope so. However I was commenting on that yesterday (and the meteor shower) and one of those within ear-shot said, "You HAVE heard about how meteor showers foretell a cold winter, right?"

I fell for it…eager to hear anything that predicts a cold, snowy winter. She said, "No, really. I’ve heard there’s an old wives tale that relates numerous shooting stars with a cold winter ahead."

Before I could get to a computer to Google it (Don’t we Google everything these days?) I had already passed that little tidbit of prognostication on to two others. Okay…I was snookered I guess. The only results when Googling "Falling stars mean snow" are those of cheating scandals and NFL predictions.

Okay, so shooting stars mean only that the Earth is passing through a bunch of golf ball sized ice and rock chuncks. They aren’t stars or even meteors. They’re just little bits of space junk. From what I understand, this current 2012 Perseid meteor shower is made from the fact that we are passing through the path of a comet named "Swift-Tuttle" and if you’re very patient and can hang around for another 130 or so years unti l 2126 you’ll get to see an amazingly close visit from that comet.

Email me your thoughts and comments… [email protected]

Previous Post
IT’S THE ECONOMY, STUPID! WILL SKIERS AND SNOWBOARDERS FLOCK TO THE SLOPES OF THE SOUTHEAST AND MID ATLANTIC THIS SEASON?
Next Post
Great Banner Elk Photo of the 2012 Perseid meteor shower from Swift-Tuttle Comet – Photo by Todd Bush