A New Week, New Opportunities for Cold and Snow 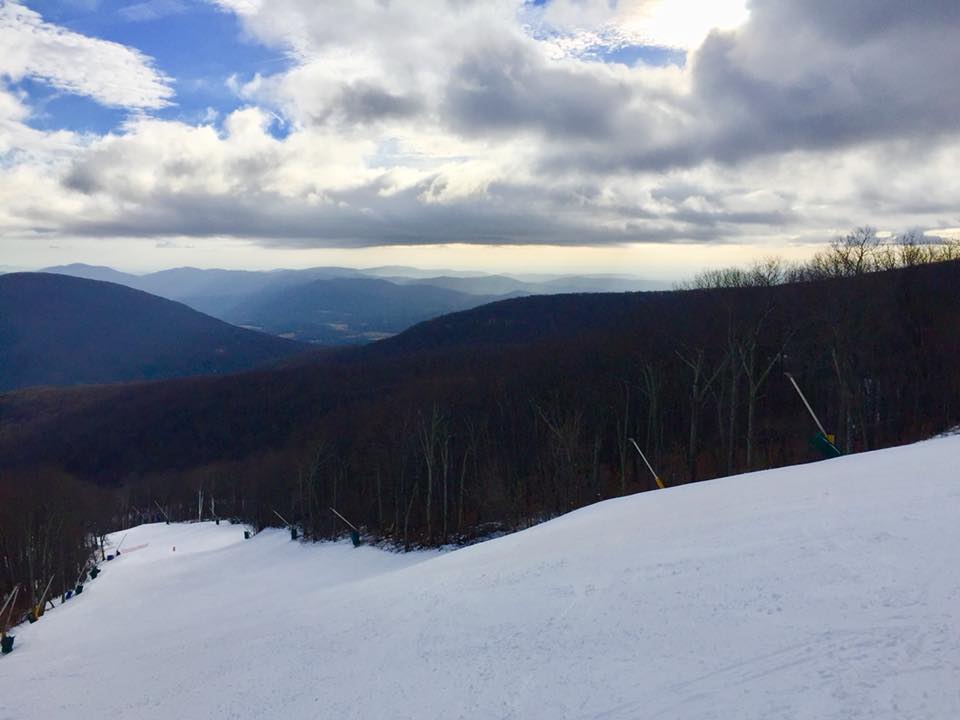 After a promising start to the weekend with Friday being absolutely perfect, the weather slowly declined as the weekend wore on.  Yesterday sure was gross.  Light rain persisted throughout the majority of the day and it ended up being close to a washout.  Thankfully, the outlook for the week ahead is MUCH better as we have the return of cold and even some natural snow in our immediate future. 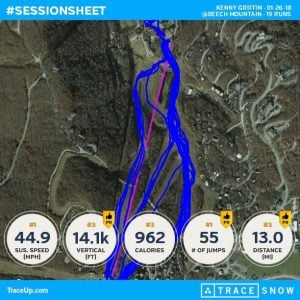 Trace stats for my day on Friday. I forgot to start it for one run.

The first half of the weekend started out on a pretty decent note.  Friday was especially awesome as Mike noted in his Saturday report.  Our Appnet company day at Beech Mountain couldn’t have had better conditions.  It’s the first time I have been able to ride at Beech during the week (on a non-holiday Monday) in years, so I was loving it.  Minimal lift lines all day long allowed me to get 20 runs in throughout the day, even with stopping for an extended lunch.  I have a buddy who was a NC ski resort hater and I convinced him to come up for the day.  He was pleasantly surprised and even said he had underestimated skiing in North Carolina.  I always love spreading the word!  Below is a video of Mr. Doble himself cruising down Upper and Lower Shawneehaw.  The old man can ski!

Joe Stevens was out and about as well and doing some “product evaluation” at Winterplace.  Here’s a photo he snapped.  Nose Dive and Plunge are looking good! 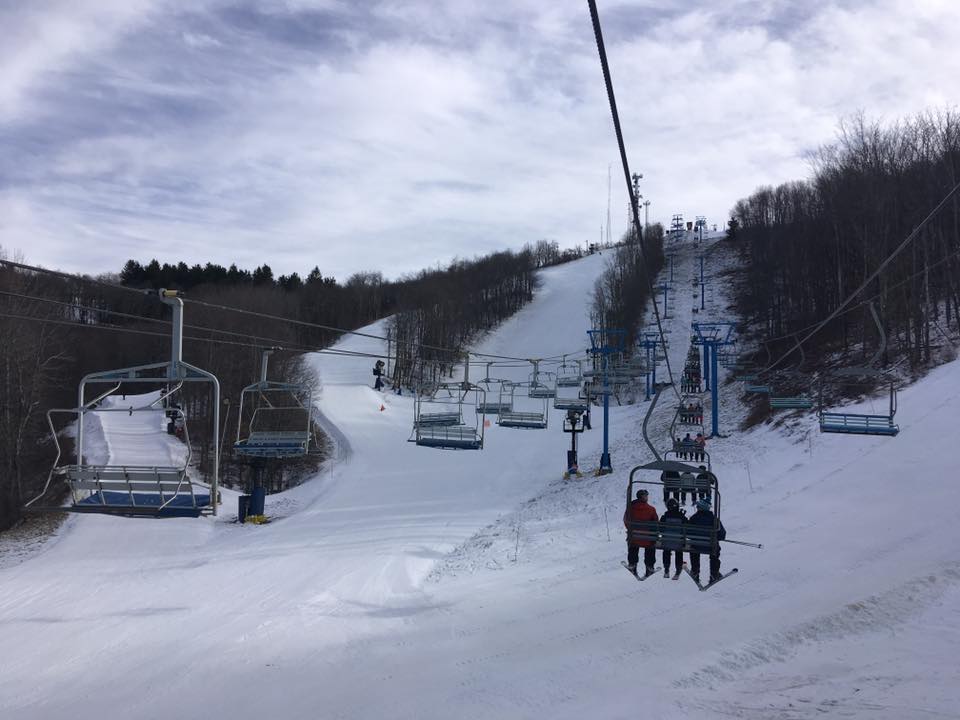 Saturday looked pretty decent and provided some good conditions before the rain moved in.  Hopefully you were able to get out on either Friday or Saturday because yesterday ended up being a good day to stay inside.  I’m looking at some numbers and it looks like anywhere from a quarter to half inch plus of under-developed snow fell at the resorts in the region.  Funny thing, Snowshoe adopted our “under-developed snow” phrase and used it on their morning report.  I chuckled a bit when I saw it.  Anyways, more power to you if you made it on the slopes yesterday.  Ponchos or some really, really good rain gear was a must.

The rain is mostly gone though and we have some cold and snow to look forward to now.  Our roller coaster weather is about to do another drastic shift beginning today as colder air begins to move in.  Temps were mainly in the 30’s and 40’s this AM but it was a little colder up in West Virginia.  The Snowshoe Shaver’s Centre cam was showing some wet flakes falling.  Look closely.

Natural snow arrives tonight as several inches are possible for the North Carolina and West Virginia ski areas between now and Wednesday.  Another light snow event is forecasted to yield 1-4″ for the NC resorts with a little more up north as the WV resorts and Wisp are looking at 2-5″.  There could also be some spillover of the snow into Virginia tonight which would be nice.  Below is the 48 hour snow forecast from the NWS. 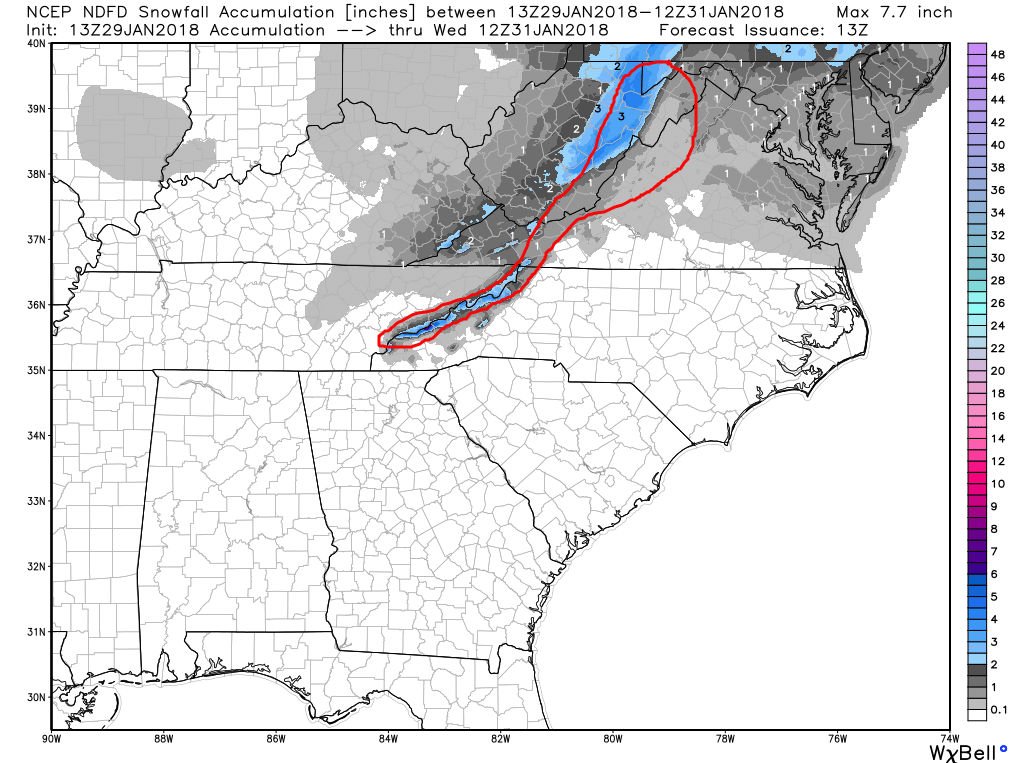 Snowmaking will resume tonight as well and help to supplement the natural stuff.  This is a nice little cold blast we’re about to see and if the ski areas choose to do so, it looks like all of them could keep the guns on throughout the day tomorrow.  My usual scan of the NWS forecasts for the resorts shows all of them staying below freezing tomorrow.  The only deterrent to making snow all day would be the wind, as it’ll be rather breezy tomorrow.

In general, the rest of the week looks pretty dang good.  We’ll have a little bump in the road on Thursday with some rain but then it’ll change over to snow.  Overall it looks like there will be plenty of opportunities to make snow with no really mild temps in sight.  The weekend is looking like it’ll provide some nice conditions once again and I’m already thinking ahead to where I’m going to go.  I’m thinking somewhere new…

Last week it looked like the beginning of February might see a warm up, but right now things have changed and the outlook is better.  There’s no extreme cold persay and snow is hard to predict further than a few days out, but the ridge of death (blowtorch) doesn’t look like it’s going to set up shop over us at least in the coming weeks.  The folks out west get to deal with that.  I’d be pretty happy with this pattern we’re in to be honest.  Light snow events with a good amount of snowmaking mixed in.  Not bad.  As always though, the forecast can change so make sure to keep checking back in on a daily basis as I’ll keep you all updated as will Brad Panovich as I’m sure he’ll have a few updates this week.

Looking for a way to procrastinate at work?  Here are a few videos to keep you entertained.  The first is an awesome aerial video from Canaan Valley Resort and shot by Golden Anchor Cabins.  Man, it really has me wanting to get up that way!

The other one is a nice little profile of Bryce Resort in Virginia.  Good stuff!

Another week, more cold and snow.  It should be a good one!  Talk to ya’ll tomorrow.

Previous Post
A VISIT TO THE LOCAL SKI SHOP
Next Post
Ski Southeast Forecast for 1/29/2018: Best Storm track of the season so far.