So the 2012/2013 has started and by the looks of things (webcams) are progressing very nicely as ski resorts in North Carolina and West Virginia are open and offering early season fun for skiers and snowboarders making their first turns.  So congratulations to the snowmakers at the resorts for making an all-out effort to lay down a significant amount of snow for those able to get to the slopes.

The matter that has me a little confused is some of the complaining I have seen on various chat rooms, comments made in some opening season articles and even face to face comments made to yours truly about how much better it could be out there.  Did I miss something or did we not start skiing and snowboarding until way into December last season?  And isn’t this the first season in a handful that the season has gotten off during traditional times – November for a number of Tar Heel and Mountaineer resorts and early to mid-December for the rest? Don’t look now folks but we are right on schedule and for the most part the slope coverage is tree line to tree line. 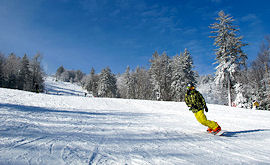 The early season conditions that you the lucky ones have been experiencing so far have been brought to you by resort officials who have taken calculated risks and pulled the trigger on all out snowmaking efforts.

To be clear folks, that is a giant leap of faith – that the snow they make doesn’t end up in the Gulf of Mexico due to a typical mild trend in December.  Heck last year at this time everyone was still mowing or could mow their lawns and some of us have already shoveled the walkways at least once. It’s like farming, the resort higher-ups are planting the seeds right now (snowmaking) and hoping another good crop (skiers, snowboarders and snow tubers) will materialize. Only time will tell.

What makes that "leap of faith" all the more impressive is the fact that it costs millions of dollars to accomplish.

Now to my point. After my preaching through the years, I have come to realize more of you (skiers and snowboarders) would rather talk about what the conditions were after the blizzard of 1993 or what it was like this season or that season instead of just enjoying what is available during this, the current season.

Well I am here to say, "Forget about those years because they are in the rear view mirror and enjoy what is directly in front of you."

Carpe diem.
Seize the day.
Act now.
There's no time like the present.

Would I like to make turns in knee deep powder like I did in 93’? Heck yea, but I also would be just as happy to be making some turns on the conditions that I have seen so far this season. 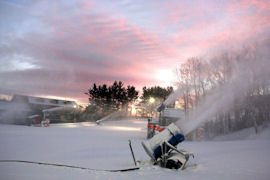 This photo is from Appalachian Ski Mountain making snow last week prior to Friday's opening day.

To my point, I was blown away when I read this past Friday that Snowshoe Mountain was opening another 40 some acres of additional terrain for skiers and snowboarders. I marveled at the first day offerings by Appalachian Ski Mountain.

Folks, stop worrying about what was and enjoy what is and “what is” are some very good early season conditions.

The additional positive news with the on-time resort openings this year is the fact that employees are being called back much earlier than in recent years.  As we all know resorts begin operations during the Christmas season and that means a number of families depend on the normal season income for their family to enjoy the holiday season. Along with the resort employees coming back to work on time, the other businesses connected to the billion dollar industry in the southeast are also making sure they are staffed for the visitors headed to the resorts.  Those businesses include local hotels, Bed & Breakfasts, convenience stores and even hospitals.  This industry has a huge trickle down economic affect and for the most part many of you don’t realize what that trip to the resort means to the region.

So the next time you start thinking about what it was like last year, the year before or even a decade ago, just think about what lies ahead of you and that’s fun on the slopes. Remember it doesn’t take five feet of snow on the slopes to make for a great on hill experience because you are only using six to 12 inches anyway when everything is said and done.  Just have fun with what you have not with what you once had because that is history and unless you are Jules Verne there is no way to go back and experience that again.