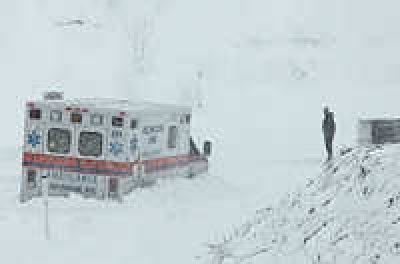 As some semblance of normalcy begins to return to those mountain communities in Maryland and West Virginia we are beginning to see a bit of a glance of life has been like for those residents who were caught by surprise from the freakish snows that came as a result of Hurricane Sandy. 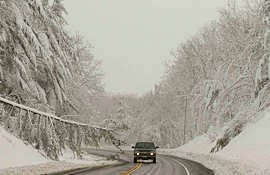 <Trees down across roads have been the main issue according to emergency crews. Photo sent by Maryland DOT

“My road, it was like a war zone,” said Del. Wendell R. Beitzel (R-Dist. 1A) of Accident, Maryland (yes that’s the name of the town just outside of McHenry, Maryland) of the innumerable trees that fell under the heavy, wet snow, knocking down power lines with them.

“Caravans of vehicles are coming into the county,” Beitzel said. “That’s what we needed, was people to cut trees and get wires back up … There will be plenty of firewood for anyone who wants it.”

(At least he’s looking at things with a glass-half-full attitude!)

She wrote, "Talk about tree damage. Our Christmas trees are buried or partially buried beneath 12-14-ft. snow drifts. The trees are from 12-20-ft tall."

While some scattered reports have come in reporting snow depths in the county of around "two feet or so" the always reliable snow reporting from Wisp Resort and Lori Epps’s marketing department are reporting 33" from the three to four day storm.

Brad Franz serves as Garrett County’s emergency services coordinator and he reported, "Many of our secondary roads remain COMPLETELY INACCESSIBLE," and he added, "This is as bad as I’ve seen it, and I’ve been in public safety for 38 years."

Frantz and Margaret "Peggy" Jamison, mayor of Oakland, said one of the largest contributors to damage in the county has been the hundreds of fallen trees — weighed down by the heavy snow and uprooted out of wet soil.

"In my neighborhood, when I finally was able to get out, it was surprising how many trees needed to be cut from the roads," Jamison said. "They couldn’t just plow them. They had to plow, stop, cut the trees, move the trees out of the way, and then get back in the truck and plow again."

Now that the storm has ceased and skies have cleared and the temps have warmed…there’s yet another issue to deal with and that is some flash flooding from the snow melt.

In speaking with Franz I brought of the subject of comparing this snowfall to others that he’d witnessed in his 38 years and reminded him that Garrett County had seend 226" of snow back during the winter of 2009-2010 and he replied, "Yea, we’re used to seeing deep snows around here but we got pounded and for a single snow event I can honestly say that I’ve never seen this much of an impact on the county."

Franz shared some quick stories that he’d heard of residents in the county who felt that they were trapped by the deep snows and worried that they were going to freeze to death. That sentiment prompted many residents to move to emergency shelters where generators powered heaters, etc.

He also said that the Maryland National Guard had to use snowmobiles to get to some locations to help cut paths through fallen trees scattered throughout the county.

Franz also shared that many residents informed him that while they knew this storm was heading their way, they still were unprepared because they simply didn’t expect to get what they ended up seeing.

Power company representatives reported that they too knew that snow was in the forecast and they were warned that it would be significant but NOT in the form that it came – heavy, wet and with the force to take down the county’s power grid.

Franz referred me to contact Todd Myer, a spokeperson for Potomac Edison, and although he wasn’t available to speak his office did say that they were working feverishly to restore power to all residents as quickly as possible. The young lady I spoke with said that she wasn’t officially able to answer questions and asked me not to use her name, however she did tell me this funny "story".

"This snow was the craziest I’ve ever seen. As the front was approaching it was like this wall of blue and the snow came down like a wall of blue snow. Have you ever seen blue snow?"

I HAVE actually! Well not FALLING as blue snow, but over the years I’ve seen several snowfalls that were very wet snows. When you punch into those kinds of snows often you will see blue hues.

The good news is that by late Thursday evening the number of residents without power had dropped to about 12,500.

NO REPORTS OUT OF WEST VIRGINIA JUST YET…

Lenore Testerman of Canaan emailed, "The resort has been closed due to a power outage with the storm. No phone service either. A message is currently being posted to the website and will be updated as changes occur. I will contact you upon my return."

Their website simply states that the resort is closed and that they are working to dig out and reopen. Their Facebook page states, "Canaan is still without electric and most employees are still digging out. I have tried to load some pictures and videos from my cell but its not posting. Trust me when I say we have lots and lots of snow. LOL."

Well there you go!

Ryan Kester, who had reservations for this weekend said, "I had reservations and got really excited to actually see some snow! But i was bummed when I got a phone call about my reservations being cancelled due to such extreme weather…I hope y’all are all safe!"

Testerman replied to many of the Facebook posts saying, "Canaan Valley Resort thank you all for the prayers we do need them. unfortunately we still have renovations to complete for the season. We are hoping it melts and comes back in Dec!"

It’s ALL about timing and perspective, right!?!?!

We’ll try to get you guys some photos and videos when and if we can get our hands on some! Until then, our hearts and prayers are with those residents and resorts in WV and Maryland.

Feel free to email me at [email protected]  with your comments, photos and more. Also BE SURE to follow us at www.Twitter.com/skisoutheast

We’ve always had a strong following on our own, old-school bit of social media (our messageboard) and hope that you’ll join us there by clicking here http://www.skinorthcarolina.com/messageboard/

However, Twitter is the BEST and EASIEST way to receive updates from is about snow, contests, lodging discounts and more, More than 140 +/- people have joined us this week and we hope YOU will as well.