A Much Better Start to the Weekend Than I Was Anticipating 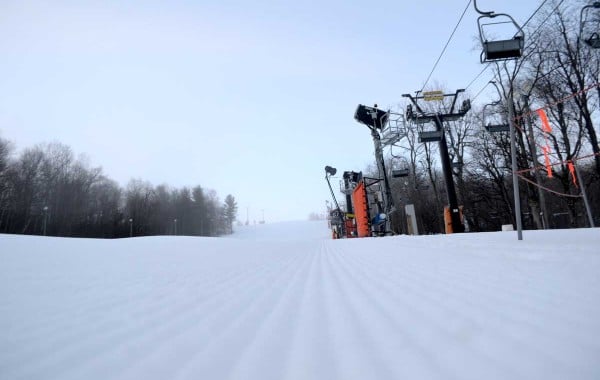 Well, I am pleasantly surprised with what I”m seeing on the webcams this morning.  I knew there would be a break in the weather this morning and the first half of the day would be pretty good (I said as much on the messageboard the other day), but take a look at the Shaver’s Centre cam this morning…sunshine!

I’m not going to lie, I wasn’t expecting to see that.  Here’s a shot from the top of Beech Mountain this morning.  It’s not quite as sunny but skiers and snowboarders are riding above the clouds (fog) this morning!

It’s a little more foggy at the resorts in Virginia, and by little I mean a lot. A little fog never hurt anyone though.

So yeah, it looks like the first half of today will end up being pretty decent across the region.  Underdeveloped snow should move in later this afternoon so the night sessions might get a little wet, but the day sessions should be alright.  I am wishing I had not been so lazy and gotten up early to go riding.  That was a dumb decision on my part.  Now I get to spend my day trying not to look at the cams on my phone while my girlfriend drags me out to go shopping.  Yay.

The Omni Homestead opened this morning with skiing and snowboarding on three trails.  As I mentioned yesterday morning, that means that every single ski resort in the region is open.  Woohoo!  They have some lodging packages and what not to take advantage of right now as well.  You can read more about it below.

They’re still having some network issues with the new webcam out there, so hopefully they/we can get that resolved soon and get it live on the site.  It’ll be of same quality as the new Wisp cam, with a much improved picture.

Not much here to talk about as most resorts are holding steady with their trail counts over the past couple of days.  That will change next week though and I’ll talk more about that in a sec.  Here are a couple tidbits though..

Don’t let the rain tonight and tomorrow get you too bummed.  The weather outlook for the ski resorts is actually REALLY good right now.  I’ve been mentioning it all week and Brad Panovich has chatted about it in his video forecasts.  Once the rain changes over to snow on the backside of the system tomorrow, the outlook is great.  Persistent cold temperatures remain all of next week and it looks like we are finally getting into a favorable pattern by next weekend for a southern low to POSSIBLY line up with cold air at some point in the coming weeks.  Snowmaking is awesome, but natural snow is even better.

Joe Stevens sent me an email this morning with a great discussion from Herb Stevens about the upcoming weather leading up to the MLK holiday next weekend.

It is going to be mild into midday Sunday, and there will be some rain to deal with during the day on Sunday.  The precip is part of the process of stepping down to a more consistent winter pattern, and thankfully, this looks like the last step.  The rain showers will turn to snow showers on Sunday afternoon as arctic air pours into the region…the ride home on Sunday p.m. may be a bit challenging  coming out of the mountains, but doable.  Once the cold air arrives, the mountain crews will have great snowmaking conditions through the week, with only a low risk of the lower elevations having to go offline for the daylight hours one or perhaps two days midweek.  Some light snow will occur on Wednesday as the cold air gets reinforced…a few inches of fluff in the northern mountains (of West Virginia) will help the resurfacing effort.

Your main concern seemed to be the forecast for the long weekend itself.  As we discussed, the “point and click” forecasts are terrible most of the time, but especially so when the pattern is in the midst of a major transition, as is the case right now.  That model will flip and flop like a freshly caught fish on a dock at times like this…it is basically useless.  There are other methods for forecasting that I employ, and they all point toward a seasonably cold MLK weekend, with a fresh shot of arctic air coming late in the 3 day period.  That new surge of cold could come on the backside of a coastal storm that could produce fresh snow in the mountains…that is less certain right now, but I have no worries at this point about adverse weather (rain/warmth) leading up to the holiday.

Looking further ahead, I will simply say that the overall upper air pattern is evolving in a way that will end up looking a LOT like the mid and late winter of ’09-’10.  You may remember that winter ended up being referred to as “Snowmageddon” in the mid-Atlantic.  I am very bullish on where the pattern is headed with respect to snow conditions in WV.

When I saw him drop a reference to the winter of 2009-2010 that got me PUMPED.  That year was epic here in the Southeast.  Just about every resort closed up at the end of March with 100 percent of their trails open.  I had many a powder days.  Those were magical times.

So stay tuned as things are going to get even better in the coming days/weeks!