Mother Nature is Ready to Move On

I told my girlfriend this morning that I was going into work to type up the ski report and that I was also wearing shorts for the first time this year. Those two things shouldn’t go together. Spring is in the air and I won’t lie, I’ve got the fever.

I didn’t go out to App last night because I was a little wary of the incoming showers, and I’m glad I didn’t or else I would have gotten both myself and my new camera wet. Instead, I went to the gym and realized how out of shape I am but that’s a different story…Looking at CoCoRaHS this morning, it looks like most of western NC saw in the range of a tenth to a quarter inch of rain. I checked our Snowshoe station as and it was in that range as well.

Quite honestly, the warm temps and wet weather yesterday definitely had an impact on the snow conditions. I’m seeing some discolored snow this morning on the cams and base depths have lowered as well. App has even dropped 2 trails, Hardcore and Thin Slice. When App drops trails you know it’s getting late in the season.

The West Virginia resorts are holding on strong right now. Snowshoe still has over 50 trails open. Winterplace, while showing a little brown, is still open with 22 open trails. Timberline is at 27 open trails. As has been the case all season, these three places are your best choice for skiing and riding right now.

The big surprise this morning for me was when I saw that Sugar Mountain is closing for the season tomorrow. They were supposed to be having an easter egg hunt this weekend where they give away a season pass, but the weather obviously isn’t cooperating. I passed by there a week or two ago and even then things were beginning to look pretty thin. They are down to just 7 open trails today. Usually Sugar holds out as long as 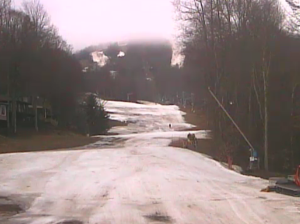 possible, so it’s nice to see them call it quits before it gets too bad out there.

<<< It’s probably a good thing that Sugar is calling it quits after tomorrow.  Kudos to them for being so agressive with snowmaking once again this year.  While they won’t be the last to close, they were the first to open!

We really are almost at the end of the season and Mother Nature seems ready to move on to spring. I mentioned yesterday who I think will close this week, and I’m standing by my guesses. Temperatures are going to be unseasonably warm for the forseeable future, with highs in the 60’s for the next 7 days. Yikes. Those are more like May temperatures, not March.

If you are a fan of slushy snow and riding in a t-shirt or hoody, you are going to LOVE the current conditions. There’s still fun to be had. So get it while you can if you can, because it’ll be a LONG, LONG 8 months.