More Than TWO FEET of Snow Fell at Snowshoe and Winterplace! 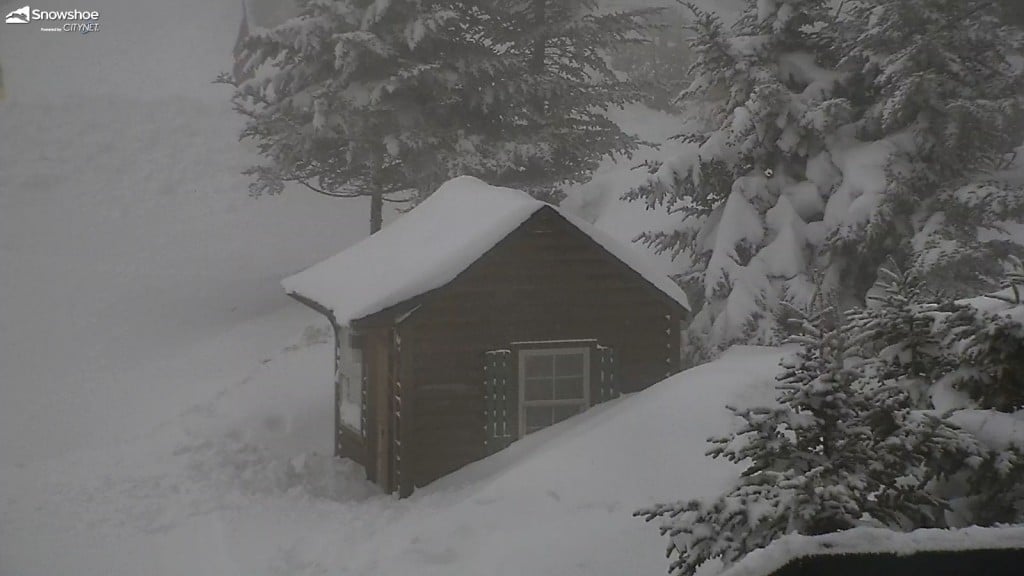 This shot was taken from the LIVE cam atop Snowshoe this morning. Up to 26″ of snow fell on Saturday alone!

There’s snow and then there’s SNOW. While the mountain resort communities of North Carolina saw from 1-3″ or so of new snow on Saturday – followed by some significant rain later in the day – the resorts into Virginia, West Virginia and Maryland got DUMPED ON!

If you’re here for the resort-by-resort details as far as slopes open, etc – click here to view the SNOW REPORT.

Looking at that snow report you can almost see where the system moved through. Within the boundaries of Tennessee and North Carolina the snowfall was a light to moderate variety that delighted visitors who hit each of the seven ski areas within the two states. Things are a little on the slushy side this morning as some rather high winds and moderate-to-heavy rains fell in the region.

There’s still a good 5″ or so of natural snow left behind on the ground even after that rainfall and of course ALL of the ski resorts are in awesome shape and reporting base depths in the 4-8 FOOT range. So conditions will be awesome for riding on Sunday and for the week ahead.

So THAT is where the s-n-o-w fell.

NOW FOR THE SNOW <- notice the all caps… 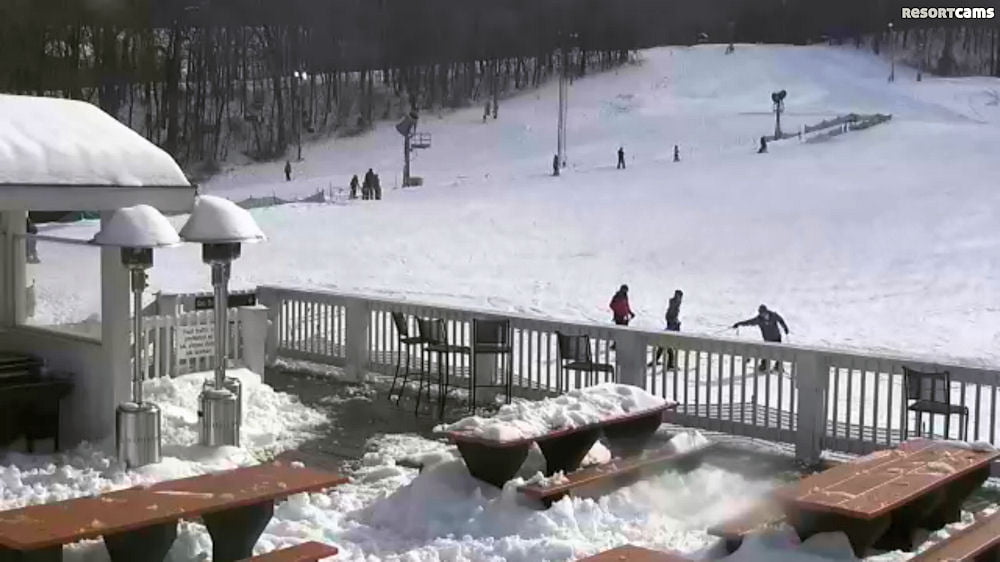 Again looking at the snow report, you’ll notice that as the storm system made it’s way into the Virginia’s it picked up slightly colder air, more moisture AND it pounded the two states with as much as 26″ of snow.

This photo snapped from Omni Homestead this morning shows the heavy snow on the one table that has not been cleared yet. (You can CLICK to ENLARGE THE IMAGE!)

All FOUR of the Virginia resorts reported 12″ of new snow – as did Canaan Valley Resort and Timberline Resort in Davis, West Virginia. However, the system took a direct, seemingly favored trip up I-77 trip into West Virginia and then over to I-64 and up Hwy 219 as BOTH Winterplace Resort (just off I-77) and Snowshoe Mountain saw more than TWO FEET OF SNOW in the past 24 hours. 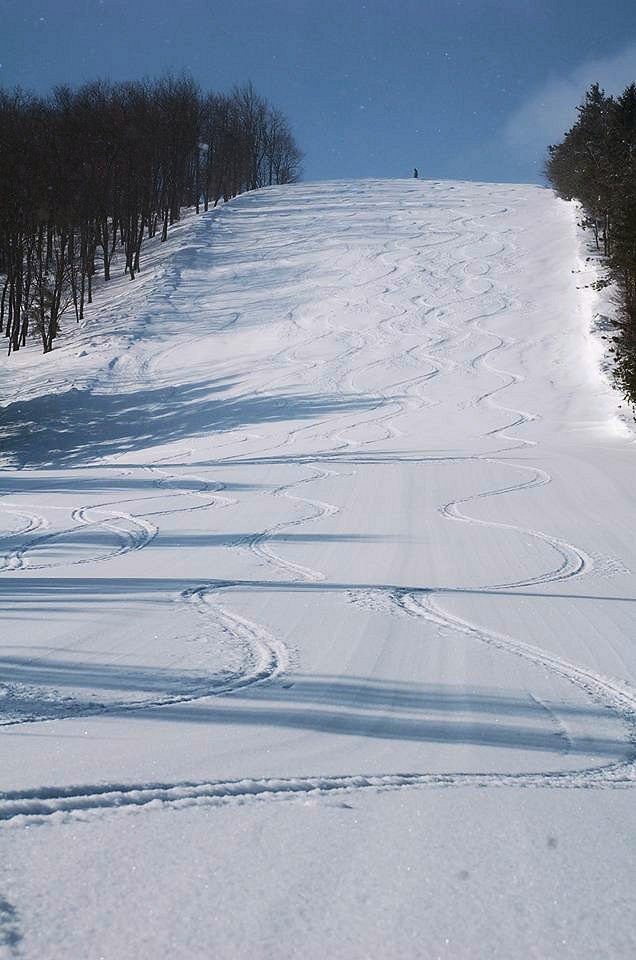 As crazy as that was – the storm system pretty much detoured completely away from Wisp Resort in Maryland which NORMALLY sees just slightly less snow than Canaan on a storm-by-storm basis. This time around Wisp is only reporting 1″ of snowfall in the past 24 hours. Both of the CoCoRaHs reporters in Garrett County have not reported in thus far so either they missed the snows of yesterday OR they are having issues with reporting in. We’ll update that when and if we get new news later.

The photo to the left supports that Wisp MAY have actually had around 5″ of new snow on Saturday. One reported emailed us a terribly short video and stated on Saturday, “5” have fallen and it’s still snowing”. (CLICK TO ENLARGE)

So…we’re likely to update that for you once we get some confirmation.
TRAVELING TO THE SNOW???

Late on Saturday, Snowshoe’s Krysty Ronchetti sent me an alert that she asked us to share with our readers that actually was advising AGAINST traveling TO or FROM the mountain as that storm was really pounding the area. Fast forward to this morning and the roads have been plowed and travel is do-able. 4WD is advised.
HERE IN THE HIGH COUNTRY…

We saw 3-4″ of snowfall over the last 24-36 hours and a good foot and a half over the last week, but you wouldn’t know it as a combination of high winds, some sunshine sprinkled in and then a good bit of rain late yesterday took a good portion of that away. According to CoCoRaHs reporters atop Sugar and Beech there is a TOTAL SNOW DEPTH of 5-6″ on the ground as of this morning.

That’s crazy when you consider that we’ve seen 19″ or more of snowfall in the last nine days.

You KNOW it’s been a snowy pattern when resorts start posting notices like, “Skiing or riding out of bounds is prohibited”. I saw that on Saturday evening’s update on Sugar Mountain’s website. I’m betting a few people were caught doing so.

If you guys are wanting to ski OFF the slopes, there IS enough snow away from the prohibited, privately owned ski resort properties. There’s been enough snowfall across the region that there are plenty of places to ski and ride if you’re willing to hike a little. Skiing and Snowboarding ON SKI RESORT PROPERTY IS AGAINST THE LAW. (A lot of people don’t know that.)

Resort’s have to enforce those rules for their own safety as well as for the safety of those who are skiing and riding within their properties.  If you’re wanting to go slide in the snow, check out this page for more information. Cross Country Skiing

One example of cross country terrain can be seen up at Canaan Valley where they have more than 30KM open with powder conditions and a 12-15″ base of natural snow. David Lesher is reporting as much as 23″ on the ground.

Although there is no official report from Roan Mountain State Park, we’d imagine that there’s plenty of snow to play on over there.
JUST SOME CLOSING NOTABLES:

I Liked this post by Wintergreen: “More than a foot of new snow! Digging out today after more than a foot of snow fell here at the resort.  Exactly how much snow is impossible to predict, however, for those fortunate enough to push, dig, shovel and scoop it all day yesterday, it was a bunch…”

Cataloochee Ski Area – 2-3″ in the last few days and 23″ on the season. I have no clue why Tammy and their guys don’t report natural snowfall on the mountain daily. We have to totally rely on some sporadic reports and the local CoCoRaHs reporter who is not at their elevations.

SKISOUTHEAST / SNOWSHOE SUMMIT IS LOOKING LIKE A SNOW FEST!

Previous Post
Snowshoe’s 26″ of Snow in the Last 24 Hours!
Next Post
We Could See Our Most Epic SkiSoutheast Snowshoe Summit Yet!