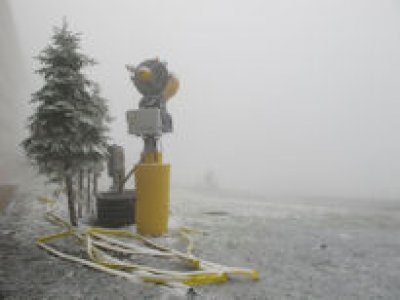 Laura Parquette, who serves as Brand and Communications Manager at Snowshoe Mountain Resort sent us some new photos Friday. Kenny posted some of those up as photos of the day. Laura reported, "We’ve seen about a quarter of an inch of natural snow over the last two days."

…snow was forecasted up that way Saturday, so we might see another update coming! 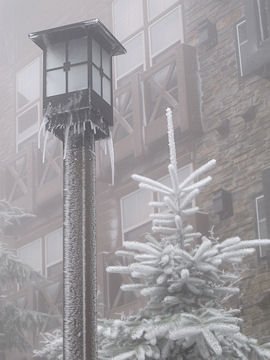 The reason we’re sharing this update is NOT because they got a bit more snow because Snowshoe and the other West Virginia resorts have already seen nearly NINE INCHES of snow in October alone. David Lesher’s Canaan Valley weather center is reporting 8.3" officially over that way!

Nope. The reason we’re sending this along is because Laura reports, "Cold weather looks to return mid-week next week and Snowshoe plans to kick off snowmaking season on Thursday, October 27th. Opening Day for the region’s #1 resort is set for November 23rd."

In case you missed reading between the lines – something I’m pretty good at – Snowshoe plans on kicking off snowmaking this Thursday and make snow whenever possible for nearly a MONTH before opening. That insures quality snow and quality terrain before opening.

The first flakes of the season fell on September 30th and Snowshoe saw 9” of snowfall in the first weekend of October.

So guys and gals…snowmaking will begin in the Southeast and Mid Atlantic before we know it. I know several people, including our own Kenny Griffin who will be vibrating about this news. Good Lord, I just saw Dakata Bauer, her dad Len and Carrigan Doble all just shutter! I’m certain the same is true for snow lovers all across the region!

Send me your emails to: [email protected]