More Resorts Open for Today and All are Fighting the Fight! 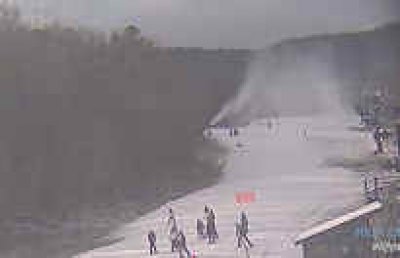 Today’s post will be another one in a long line of updates that relate to perception. If I was to report on how things look for skiing and snowboarding right now – not only for today but for the upcoming Christmas Holiday period – compared to a normal mid-December winter …well they suck.

However, compared to just a couple of days ago it actually looks pretty good with perhaps a "great" comment thrown in for describing some of the ski areas. Several ski areas have pretty good coverage when you consider that a decade ago probably NONE of these ski areas would have much, if anything open.

I’ve been swamped all week long and have admittedly not even glanced at what the heck is happening on the slopes or on the horizon weather-wise. I’ve left that task to the KenDog and it looks like he missed the fact that Bryce Resort got opened on Friday. I know that Rob Swartz, Horst, Ryan and the crew at Bryce are happy to get things cranked up, if even with limited terrain.

Massanutten, Wintergreen, Timberline and Wisp all opened TODAY, so things are obviously looking up – kind of, sort of. No REALLY they are at least for this weekend. Sugar and Cataloochee are now skiing and riding for the sixth weekend in a row which is partially due to their proactive/aggressive efforts and partially due to the fact that the weather patterns have been such that within each of the last six weeks we’ve had one or two nights where the snowmakers can do their magic. One or two nights with the kind of snowmaking talent we have will get you some snow on a few slopes, but not the kind of coverage that we’d all like to be seeing at the resorts right now.

Everyone is holding their breath…

The bulk of the emails that I personally have received are all asking the same few questions:

1. Will there be any snow on the slopes for Christmas?

2. Should I cancel our reservations?

3. When will the pattern change? 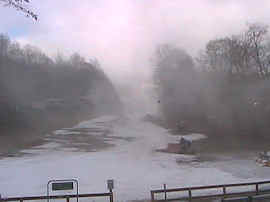 It is within challenging seasons like we’re seeing so far that I suppose my "job" becomes more vital to those of you who have come to depend on us to tell it like it is and provide you with our "no bull" reporting and opinion on these and other questions like them. Veterans skiers and snowboarders like we have as a niche core of our website audience know that there will be a few ski areas that will, no doubt, be open with whatever slopes they can fight to offer. Newbies and those of you who only frequent the resorts once or twice per season have no clue of what to expect and these form the bulk of the emails that are in my INBOX. Emails range from asking for things more related to financial advice than vacation planning. Here’s an example of what I’m alluding to:

Janice R of Washington, D.C. wrote, "Hi. I’ve followed your website for years and need to ask you a question. Times are hard financially right now and we have reservations at (resort withheld) and with the weather looking so bad do you think we should go ahead and cancel while we still can? I mean we can use that money elsewhere."

The answer is really simple as far as I’m concerned. Many people (including yours truly) make Holiday ski plans as much to hang out with family and friends as they do to hit the slopes. From my experience, the average family spends a ton more time off the slopes during a ski trip than on the snow. Each Holiday ski week I and about (17) of my closest family and friends spend a week at a ski resort. Often it’s Snowshoe, but we’ve done Canada and out west as well. Many of our group will hit the slopes for a couple of hours – maybe twice a day and then the rest of their time is spent hanging in the village shops, cafes or playing games in the room, etc.

If that resembles your experience, then by all means you should keep your trip plans because there will be some snow available at some ski areas. Stay abreast of the latest weather and snow report news and act accordingly. Admittedly, I stay on the snow as long as my legs will hold out each and every day of the trip. If that is you, then you may want to change your plans and perhaps head to Orlando or Key West. Temps MIGHT even allow for a dip in the ocean!

Look – I’m not going to tell you guys how to spend your hard-earned monies. Over the last two days I’ve had several of our group ask about our own plans for Holiday skiing this year. We’re looking very hard at next week and we’re seeing the same things you guys are. There’s limited terrain which means that those HUGE CROWDS are going to have less slopes to hit, which makes things more crowded. Of course you have to consider that there’s probably a lot of cancellations happening…so maybe they won’t be as crowded as they might normally be.

Weather guru, Mike Stinneford of D.C. emailed me this morning that, "…First off, looks like there will be some snow-making possible tonight and again Sunday night. After that, I see little or no chances for making snow until Christmas Eve night, and that only looks marginal. Unfortunately much of the coming week looks mild, and with wet weather moving in late Tuesday and sticking around for much of the week I am thinking that most ski resorts are going to have a very difficult time getting open for Christmas weekend. In the long range the week after Christmas is also looking mild with a chance for some rain.

Basically we remain in a pattern of zonal flow with the really cold air remaining bottled up in Canada. Looks like this pattern could now persist into early January.

Have a great week, and I’ll talk to you next weekend."

Now Mike, how the heck am I supposed to have a great week with that kind of news?

I glanced at some long-range forecasts and while I’m seeing three nights of some natural snow in the offing – AND maybe four nights of possible snowmaking temperatures…I’m also seeing four days where there’s "showers" in the forecast through December 27th or so.

If that pattern IS INDEED expected to continue for that following week after Christmas, then things are going to be challenging to say the least. My guess is that by Christmas things will look p-r-e-t-t-y close to exactly what they look like right now at your favorite ski hill. If your favorite resort is open now, they will probably be open then. If they are not, then they’ll probably not be open for the Holiday ski period. Whatever is open now, is about what you should expect for the Christmas to New Years week. So have a look around and discern for yourself if that’s what you’re willing to play with.

Personally from what I’m seeing right now, things look p-r-e-t-t-y decent at Cataloochee with pretty decent coverage side to side. Ditto that for App and Massanutten. Sugar’s base looks surprisingly sketch this morning and you can ditto that for several ski areas around the region.

As they say, it is what it is…

The best advice I can give today regarding keeping those reservations is to check your rental agreement. In many cases, you have no option to cancel unless you’re willing to lose your first half deposit. Another idea is to poll your family or group. Of the seventeen people travelling within my group for the Holiday season TWELVE are saying "LET’S GO" and make the best of it. Of course those are all the kids and they other five are the adults that are paying for things!!:-)

Maybe that is the message we need to pay attention to. The kids want to go play. Isn’t that what’s important?

As for me…I’m leading towards sticking with things and spending as much time on the slopes as possible and chilling with the family the rest of the time…while praying for some cold and snow.

Hopefully you guys and gals are doing the same.

Check the snow report. It isn’t pretty, but the resorts are making the best of things and fighting the fight for the rest of us. Reward them with your business.

Email me your comments, thoughts, photos, vids or anything else you like. [email protected]