MLK Weekend is Upon Us! 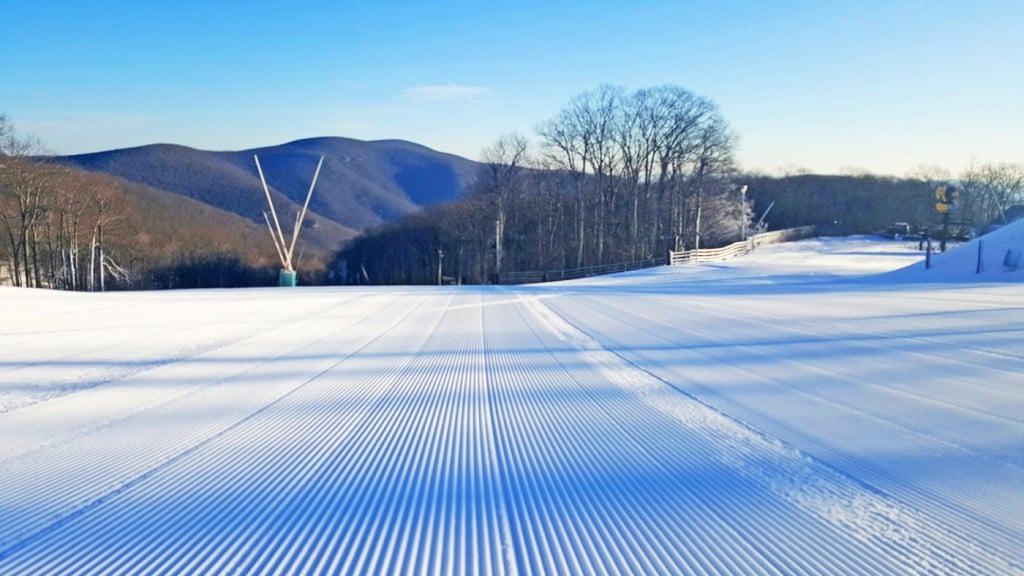 Another successful work week for the ski resorts is coming to a close and the always important MLK holiday weekend is right at our doorstep.  Hopefully, many of you reading this are either on your way to the mountains or waiting impatiently all day at work in anticipation of heading to the mountains.  Conditions at the ski resorts are the best they’ve been all season and it is crazy to think that a little over two weeks ago there was bare ground at just about every resort.  We haven’t had a really good snowstorm yet, but Mother Nature has at least provided us with consistently cold temperatures which has allowed the resorts to blast the slopes with manmade snow.

I don’t think people realize just how good snowmakers here in the region are.  If not for them none of us would have anything to ski or ride this weekend.  Check out this stat from Wintergreen’s morning blog.  It was posted yesterday mid-morning…

Since the (snowmaking) system started back up on Sunday evening, our system has pumped 22,000,000 gallons of water in only 85 snowmaking hours, average pump = 4,300 gallons per minute. The amount of snow produced = just under 100 acre feet.  That’s a foot of snow spread over 100 acres of ground or snow 100 feet deep covering 1 acre…. However you look at it, that is a lot of snow!

That’s pretty fascinating stuff and mind boggling when you think about it.

The elephant in the room regarding the weather is obviously the rain that is on it’s way for later today.  It’s pretty impressive looking on the radar I must say.  However, the heaviest stuff looks to stay east of the mountains and it’s going to move in and out quickly.  Sometimes you forget, but the ski resorts in the Southeast are pretty spaced out and the weather can differ greatly.  For instance, the rain has just about made it to Cataloochee in southwestern NC.  You can see how dark and gloomy it is on the Upper Omigosh Cam. 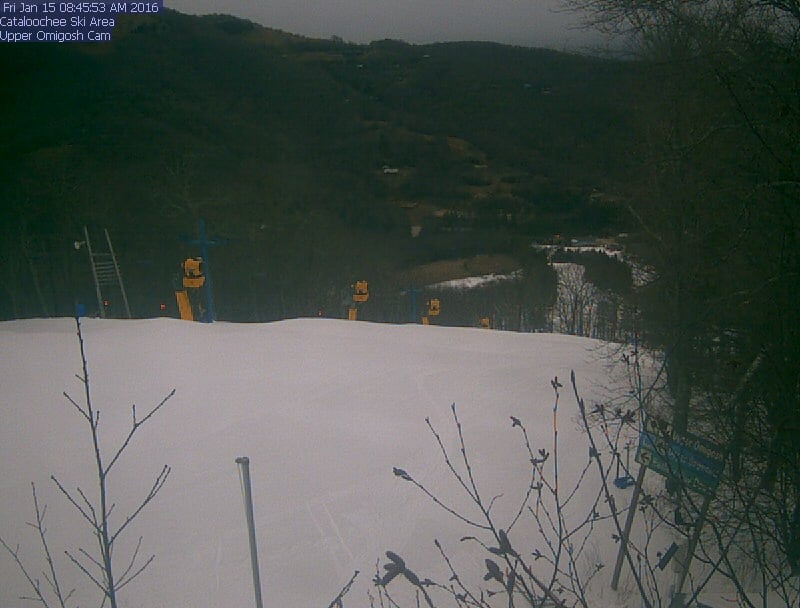 And up towards the northern portion of the region at Snowshoe it’s all sunshine right now. 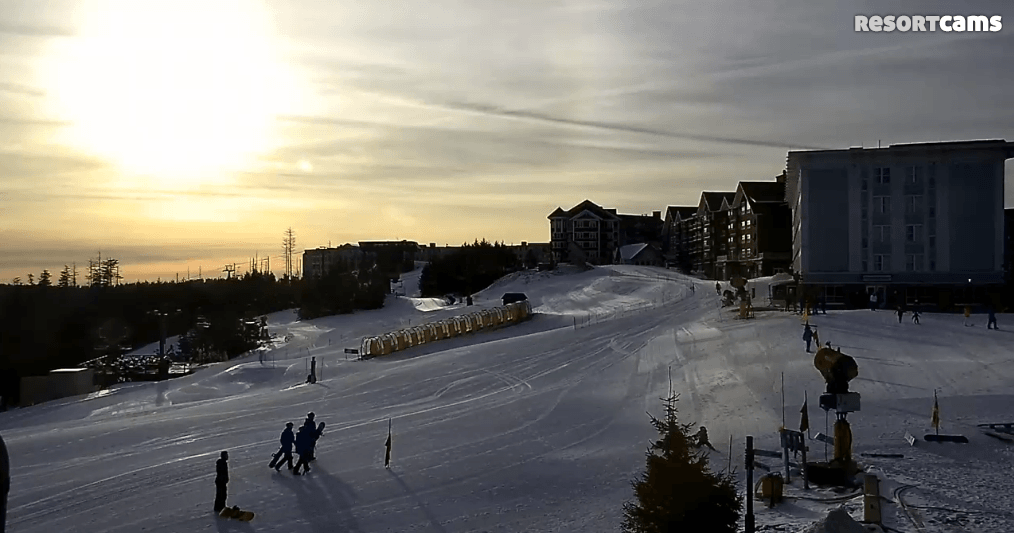 Sometimes I find myself focusing too much on the North Carolina resorts when I come on here and talk about the weather.  That’s simply because they are the ones I frequent the most.  I have to catch myself and remember that weather conditions can vary greatly depending on which portion of the region you’re in.

If you are partaking in a day session at the resorts in West Virginia, Virginia, or Maryland, you should be fine until the mid to late-ish afternoon hours.  Folks at Ober in Tennessee and any of the North Carolina resorts are unfortunately going to get wet though.  Blegh.  As I said though, this underdeveloped snow moves in and out quicky and the rest of the weekend looks cold and even a bit snowy.  Check out Brad Panovich’s latest forecast.

More consistently cold temperatures…oh yeah!  It looks like the snowmaking will resume tomorrow and continue WELL into next week.

Monday and Tuesday just look downright frigid.  I am looking at some NWS forecasts and the high temperatures on Monday up at Timberline and Canaan is 10 degrees.  Sheesh.  We haven’t had anything that cold this year so if you stick around for the long weekend be prepared and make sure to bundle up!

I don’t usually do a summarized version of the SNOW REPORT, but with it being a holiday weekend and a lot of new trails opening up this week and today, I figured now is as good a time as ever.  So let’s do it! 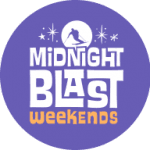 Appalachian Ski Mountain: They continue to be 100% open with all 12 trails available on a 24-44″ base.  They also have a couple of terrain parks open, which I am personally excited about going to ride in tomorrow.  Jumps!  Ice skating is open as well and don’t forget that App’s Midnight Blast Weekends take place not only tonight and tomorrow, but also Sunday night since it’s a holiday.  Skiing and snowboarding until midnight…sweet!

Beech Mountain Resort: They are now open on 12 of 15 trails, with the popular White Lightning trail opening yesterday…top to bottom.  Almost the entire front side of the mountain is now open with only Meadows and Upper Southern star not opened on that side.  Skipink was out and about there yesterday and seemed to be enjoying herself.

Cataloochee: Cat remains 100% open as well, with all 18 trails open for business.  That’s third most in the region currently.  Tubing is also open and they do have some park features on the mountain.

Sapphire Valley: They’re back open for the holiday weekend with both trails open as well as 5 lanes of tubing.

Sugar Mountain: Gunther currently has 12 trails open for skiing and snowboarding with 7 lifts operating.  The new high speed 6-pack lift should do wonders this weekend to help alleviate lift lines out there.  This is really their first time getting to use it on a busy weekend.  I’m sure guests are going to love it.

Wolf Ridge: The Wolf is open on 13 trails today and I must say, they are doing a great job this year of making snow, opening new trails, and keeping their snow report up to date.

Bryce Resort:  They have gotten their final trail open and are now at 100%!  I will dispute their report that says they have a 28-72″ base, but regardless conditions look pretty good out there on the webcam and in some pics I’ve seen.  They’ve apparently having a torchlight parade on the slopes tomorrow at 9:30pm, so that should be pretty cool!

Massanutten: They opened the CMB Terrain Park and Pacesetter today, bringing them up to having 12 trails open on a 28″ base.  Should be a fun weekend out there!

The Omni Homestead: Lynn Swann emailed this morning letting me know that they are skiing and riding on 4 trails today with a 38″ base.  I am loving the new webcam out there. 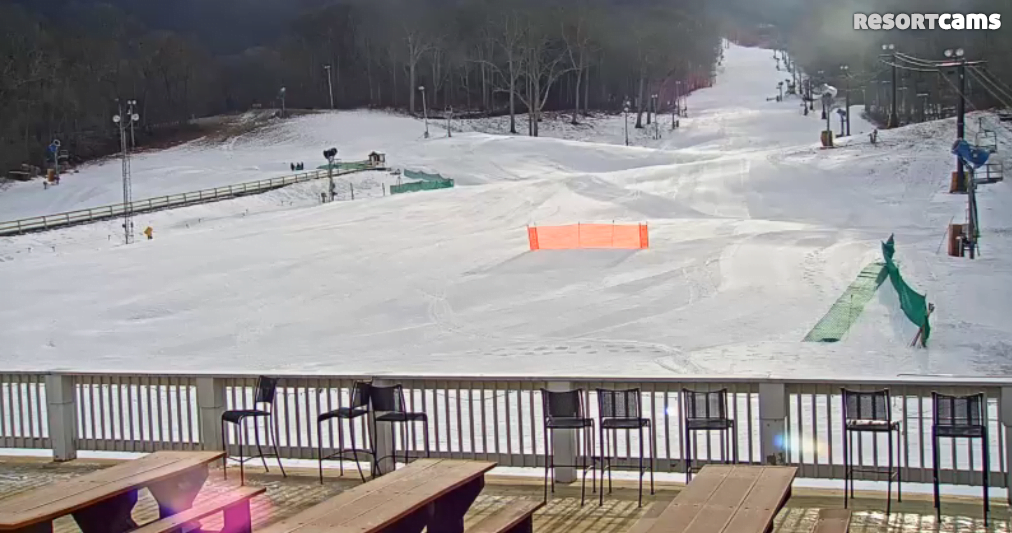 Wintergreen Resort: They’ve been holding off all week in opening new trails as they’ve been blasting the slopes with manmade snow as much as possible, but today they’ve opened 8 additional slopes.  That’s double what they had yesterday as they are now up to 16 open trails on a 24-48″ base.  Here’s a preview of what to expect this weekend.

Canaan Valley: They opened a couple more trails today and are up to 10 open ones now on a 24-48″ base.  Look for more to open this weekend according to their snow report page.  The terrain park opens tomorrow.

Snowshoe Mountain: The Shoe continues to impress with their snowmaking and today have opened up a bunch more trails, including Cupp Run on the Western Territory side.  They’re up to 33 open trails now on 125 acres, which is easily most in the region.

Timberline Resort: They are up to 17 open trails now on a 31-45″ base.  Things look really good up there based on some of these pics!

Great pics! Thanks for sharing!

Winterplace: Warren and his snowmaking crew have been doing a great job lately and Winterplace is now up to 23 of 27 trails being open on a 24-48″ base.  Snowbowl, Buttermilk and Milkshake all open today and just about the entire mountain is open now.  Awesome!

Wisp Resort: Wisp is up to 15 open trails now on a 20″ base with 7 lifts spinning.  I must say, that NEW WEBCAM up there has been my favorite to watch over the past several weeks.

Ober Gatlinburg: The Tennessee resort is open on 6 trails today with 3 lifts spinning.  They have a bunch of park features out as well and there are many off snow activities taking place on the mountain including the Ski Mountain Coaster, alpine slide, and indoor ice skating.

Whew, that was a lot.  Hopefully I didn’t miss anything.

Everyone enjoy your holiday weekend!  It should be a good one.  If you’re out at App tomorrow or Beech on Monday, look for me and say hi!  I’ll be in black pants and a grey jacket.  Also….

Previous Post
More Cold and Snow!
Next Post
The Ski Season is back…Time to take a lesson.