MLK WEEKEND IS HERE…AND IT WILL BE A RECORD BREAKER…

This is only my SECOND snow report of FirsTrax column of the season as Tim Bahlke (mostly) and Kenny Griffin have done an awesome job of keeping you guys informed. Since I've been "off the grid" as far as being in regular communication with you guys I thought I'd go out on a limb and go ahead and predict that the MLK Weekend WILL go down as the busiest on record for many ski resorts in the Southeast and Mid Atlantic.

My reasons are pretty straightforward. The weather setup was/is almost perfect with 4-7" of snow having fallen across the highest elevations…yet the roads will be crystal clear for the crowds headed to the mountains. The conditions at ALL of your favorite ski areas are awesome. The news media (weather peeps) have been showing our LIVE CAMS at ResortCams.com more times recently than Pamela Anderson has shown her boobs. That always gets people excited to head up. (The snow reporting I mean.)

So expect the slopes to be FULL and be patient if you're headed to any of the area's ski resorts today as there WILL BE some longer-than-usual lift lines.

As I was touring the region via the live cams, there is some great snow still falling AND the lift lines are pretty easy right now. (9:25am). They usually ARE pretty light early, but expect the masses to be on the snow by 10:30am…everywhere. 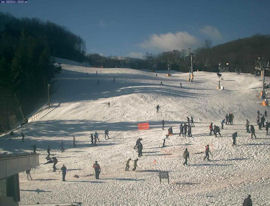 It is already looking bust at the base of Cataloochee this morning via their cam. Look at the blue skies over there!

You guys know me. I'm a snow-reporting savant. In this case I'm using the word definition "to know" or "knowing". Yes, here at SkiSoutheast.com-land we ARE the all-knowing, hardly ever wrong, beast of the east when it comes to accurately reporting where the natural snow has fallen and HOW MUCH snow has fallen.

To that end – AND because we are now RIGHT AT the midway point in the season (I could hear the moans and groans!) I thought I'd provide a little overview of snowfall on the season.

As usual, Snowshoe, Canaan and Timberline in West Virginia lead the way in natural snowfall on the season, with Wisp coming in with the 4th most snowfall thus far on the season. However, there are some oddities in where and how much snow has fallen at other locations around the region. Most often Appalachian and Cat would have more snowfall that Wolf or Ober…but that's not the case so far on the season.

Obviously late January and February are usually our SNOWIEST months so we'll see it all pans out, but right now, most every resort is on the low side of what we would normally see by now.

I'm doing the snow report and conditions this morning in alphabetical order as I usually do, but I've pulled a few out of that order where the deepest snows fell overnight.

8" is being reported up on Beech. It's very windy up there as well (0°) so the wind chills have to be in the minus 15° range. Bundle up. For those who will no doubt write us (me) about the big difference in snow totals from Beech to Sugar, the snow being reported (officially) from the CoCoRaHs snow reporting station up there is reporting 7" of snow this morning and that is what we are reporting. 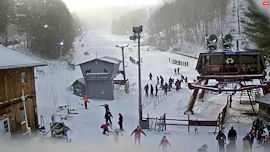 It was snowing rather hard at Wolf Ridge Resort when I checked in on their reporting and the new LIVE STREAMING CAM that we have over there now.  Kudos to Craig Perkings and his staff as they have implemented a new management team over their which is a mix of the best of the old with the new. Craig hinted that they are very close to announcing a new marketing director for Wolf. He did tell me where he came from and it is exciting to see that Wolf is really kicking things up. I've seen lots of emails regarding how nice the snow is over there.

Beech Mountain is also continuing on their path of really amping things up with great snow coverage, snow making, manintenance and tons of well-thought-out entertainment to keep their guest happy and coming back.

Ober Gatlinburg – 15° – My buddy, John Cossaboom, who serves as the Winter Sports Director at Ober emailed this morning that he woke up to a "surprise" 1" of new snow and reported that, "It almost looked like winter!" Ober is playing on 7 of 9 trails today, on awesome tubing and the biggest and best ice skating rink in the region – bar none. Ober has seen 10" of snow on the season. 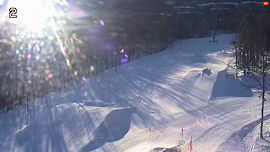 <Check out the grooming at Mass this morning!

Canaan Valley Resort – They reported 4" of new snow and 62.7" on the season. 20 of 43 trails open and tubing as well. However they've ACTUALLY had 5.4" of snow in the last 24 hours; 7" in the last 72 hours and 64.1" on the season. Conditions should be AWESOME TODAY. By the way these snow numbers are from my buddy at CanaanMtnSnow.com. See: http://data.canaanmtnsnow.com/

Snowshoe Mountain Resort – 11° and 3" of new snow with 6" in the last 72 hours. Snowshoe will play in 56 of 57 trails today with packed powder conditions. Snow tubing is open as well as snowmobiling and more. I'm certain that the Village of Snowshoe will be hopping today! 61" of snow on the season.

Timberline Resort – 7° and 5.4" of new snow and 23 of 40 trails open! Expect awesome conditions on the resort with the longest trail in the region (2 miles) and the highest average vertical. Tom Blanzy and his crew have the mountain in awesome shape. 64.1" of snow on the season.

Winterplace Resort – 11° and 4" of new snow; 6" in last 72 hours and 29" on the season. Winterplace posted an awesome new video and you'll want to check that out on our front page. Also they are offering 26 oof 32 trails open; snow tubing and AWESOME conditions.

The Homestead Resort – 12° – No New Snow Reported; 9 of 9 trails open, ice skating and snow tubing as well as snowmobiling are all operating. Great conditions. 2" of snow on the season.

Wintergreen Resort – 8.4° – 1" of new snow and 3" recently. 23 of 25 trails open.
PERFECT DAY – 1 inch of new snow, Clear skies, 90% open, 2 Terrain Parks with lots of new features, Ice Skating, Tubing, Ridgely's Fun Park, Rail Jams, Freestyle equipment demos at the top of Eagles Swoop……what am I forgetting??  This weekend is likely to be the best of the 13/14 season, make plans to head this way! Wintergreen is reporting 4" of snow on the season.

Wisp Resort – 7° and 3" of new snow. They are reporting 40" on the season, but it is actually OFFICIALLY 43" of snow from November 1st through today. Wisp will play on 27 of 32 trails, with snow tubing, ice skating and more.

Previous Post
It Is Going to be a Great MLK Weekend
Next Post
LEARN TO SKI & SNOWBOARD MONTH / WORLD SNOW DAY!