Mix in a Little Light Rain and the Slopes are Uncrowded…and Awesome! 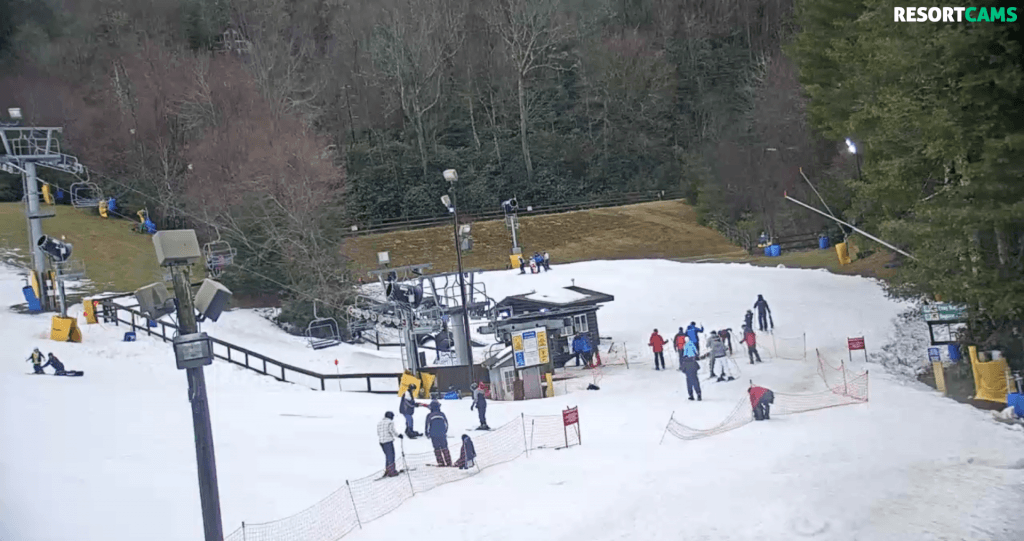 It is 1pm on Friday, December 28th and I’m chilling and drying my ski gear by the fireplace as the morning round of skiing was a bit on the wet side…but awesome. It’s kind of funny that in all my 31 years of skiing, I have only had ‘the opportunity’ to ski in the rain…maybe three times…today being the third in my recollection.

Earlier in the week, the forecast for today was a washout of one-half, to maybe an inch of rain. We had planned to use today as an après-ski day of going to a movie and bowling. It’s kind of an annual tradition during our ski getaway to take a day and play elsewhere. The rains DID come but most of the heavier rain (.80″) fell overnight. While the rain DID wash away all of the gorgeous snow on the trees, the slopes themselves looked great except for some thinning over on some of the Northern Territory here at Snowshoe.

As the hour came for us to head away for the day…we changed plans at the last moment and decided to stay and play. The forecast for here in the WV mountains was for hit and miss sprinkles until around 2pm and clearing out. So we changed up and got on the snow at about 10am. It was very lightly misting rain and yet that moisture kept the slopes from getting the traditionally MUCH HEAVIER traffic on this day on the calendar. We skied until around noon and came in to dry off.

The longest lift line we saw at the bottom of Ballhooter was MAYBE 5 minutes. The snow was soft and so much fun to carve and I barely felt wet, although once I got everything off, my outerwear was pretty wet. Twenty minutes after some fireplace magic and everything was dry and ready for another run…which we now have planned for the next hour or so.

As I was typing this up, I looked around at all of the webcams and see much the same thing going on everywhere. Looks like plenty of snow and no lift lines at Beech and App.

Things are a little wetter (right now) in Virginia, but fans are hitting the slopes. I saw one quick shot of a lift ops guy at Wintergreen Resort using an umbrella. That MIGHT have been a first for me, Haha. Can’t blame them.

The rain SEEMS to already clearing out around the Wisp Resort area as the sun is casting shadows on the slopes. Lift lines still look non-existent at Wisp as well.

As I mentioned earlier…I’m getting ready to head out again do it all over again. One thing I can promise you guys who are not venturing to the slopes because of a little rain – those of us who did ride today…would all agree that it was AWESOME.

Tomorrow is looking fabulous with sunny skies and chilly temps. So we’ll postpone our après-ski bowling day to another day as it’s great to be playing in the snow!

As I wrap up this post, I was in line at Ballhooter just before heading up to the condo and a guy next to us was talking about how HE figured out to come out and play. My daughter and I overheard him say, “Dude, there’s this website that shows all of the cameras and they actually take the time to make recommendations and stuff. It’s why I’m out here. You should check it out.”

I asked him, “Are you talking about SkiSoutheast or ResortCams?” He said, “Yep that’s the one and you should check them out.” I proudly said, “That’s always great to hear because those are my websites.” He said, “Oh man, I follow you guys on Instagram.”

I saw people in line immediately pull out their phones. Pretty cool.

I’ll check back in after a bit… If you have anything to share, drop me an email at [email protected]