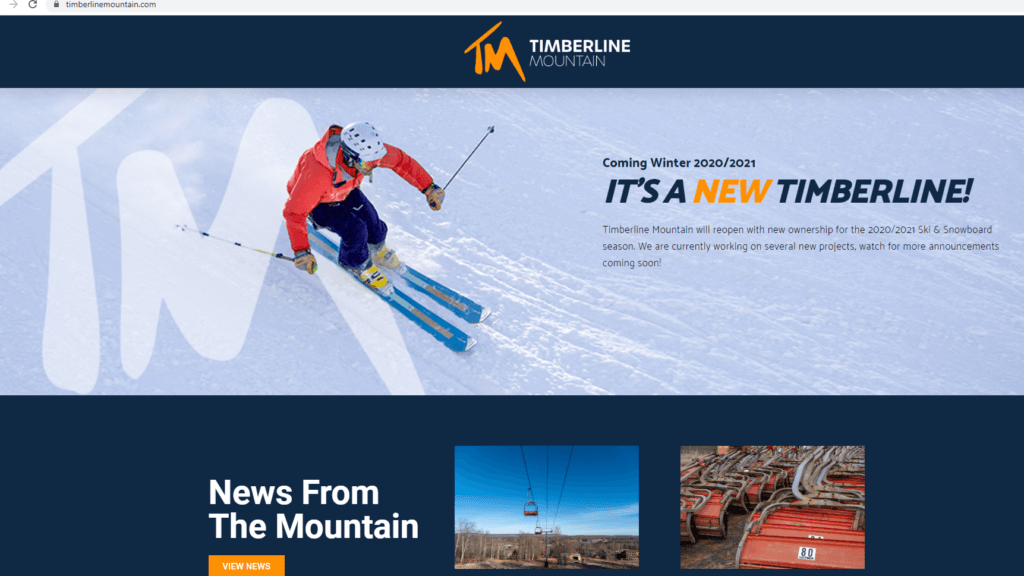 You probably already heard about the exciting happenings in the Canaan Valley area of West Virginia right now with the new owners of the Timberline Ski Area. What was for many years known as Timberline Four Seasons Resort, has been re-branded as Timberline Mountain.

For disclosure time now, if you don’t know, I am the Executive Director of the West Virginia Ski Areas Association. When it was announced late last year that the owners of Perfect North Slopes (PNS) in Indiana had purchased the Tucker County facility, I quickly reached out to the company’s President, Chip Perfect (Mike Doble beat me to it) to welcome him and his team to the mountain state.

Since then I have been working with Jonathon Davis, PNS’s Assistant General Manager and the person heading up, first the clean up of Timberline and then, the make-over of the ski area that features 1000 feet of vertical. To tell you the truth, if I am having a bad day, I reached out to Davis, because he is so excited about what they have planned for their new mountain.

Those of you who have skied and snowboarded at Timberline know about the exciting terrain that is available when the slopes are snow covered. In recent seasons, that has been a challenge as the resort’s snowmaking system has been in the need of a severe makeover for some time. According to Davis, they plan to have those slopes open for skiers and snowboarders around the Thanksgiving holiday.

I know a lot of you, including yours truly have done your research about PNS and have come away, like me, with smiles on your face and optimism in your stomach. These folks know how to make skiing, snowboarding and snowtubing fun for everyone. Thousands upon thousands of folks head to PNS every winter, mostly from the Cincinnati and Lexington areas. This isn’t going to be the case with Timberline Mountain, but thanks to the new Rt. 48, the Washington, DC crowd is just over three hours away these days.

You say, hey, having great terrain is awesome, especially if it is snow covered, but you have to safely get to the top of the mountain to enjoy those slopes. Well, get ready for an exciting announcement from PNS later this month on how everyone will be transported up the hill. Without letting the cat out of the bag, what Davis has shared with me, has me looking forward to my first turns in a number of seasons at Timberline. Again, stay tuned.

The ski business can get very competitive, as only three percent of the nation’s population enjoy the outdoor activity and that’s a figure straight from the National Ski Areas Association. That means ski areas are battling to attract a relatively small crowd to their location, not only in the southeast, but throughout North America. Let me just say, it can get very competitive.

In West Virginia, while every resort competes for that skier visit, the resorts also work together to attract people to the winter outdoor sport. Davis said while that wasn’t part of their decision to purchase Timberline, he has been happy to see how all of the West Virginia resorts work together. He pointed to this year’s West Virginia 4th and 5th Grade Passport Program, where the entire group, banded together to provide free skiing and snowboarder to the young folks, to get them in the sport. Then when it was announced that PNS had purchased Timberline, Davis told me that he and his boss had received phone calls and messages from every resort, welcoming them to the West Virginia Ski Resort team.

Any skier or snowboarder worth their weight understands you can’t operate a resort without a dedicated staff, willing to provide a fun experience for every visitor. Davis explained to me that they knew that there were folks already in the area that they were going to reach out to, but, he added that he has been surprised with the amount of current employees of PNS that have expressed a desire to relocate to Tucker County. All I have to say is that company must be doing something right for their employees and that’s only good news for everyone in the Canaan Valley area.

Now let’s talk money and in this case, lots of it. On a recent radio talk show, Davis explained to the host that is the first time that the company is borrowing money for operational purposes. So how much money are we talking about? Well the resort was purchased off the auction block for 2.2 million dollars. For the previously mentioned infrastructure upgrades, toss in another 11 or so million dollars and presto, you now have an operating ski resort that everyone is going to enjoy.

Two of the biggest cheerleaders right now in the area for PNS’ purchase of Timberline have been Steve Drumheller, General Manager of Canaan Valley Resort and Jessica Waldo, Executive Director of the Tucker County Convention and Visitors Bureau. Both of these folks have been out front making sure the community knows just what this is going to mean for the region.

Recently I heard some rumors that PNS wasn’t going to be able to open for the 2020-2021 season. Hog wash to that notion. I have been a part of an resort expansion project in the past and I am not seeing or hearing anything that makes me think, everyone who wants to, won’t be able to make turns next season at Timberline.

At the end of the day, this is not only great news for skiing and snowboarding in West Virginia, but for the entire southeast region. When you have quality, they will come and enjoy a few million dollars of excitement at Timberline Mountain.