Mild and Wet Now….Cold and Snowy Later This Week! Welcome back to another week people! Hopefully you had a good weekend and were able to get out and make some turns. I decided to take the weekend off and was down in Charlotte but I was paying close attention to the cams and updates over on the messageboard. The weather didn’t look to be particularly great, but it seems as if good times were had nonetheless! 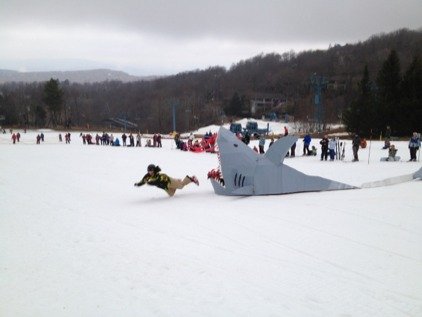 <<< The cardboard box derby looks likek it was a lot of fun at Beech on Saturday.  It was just one of the many activities that took place at Winterfest this weekend.

Nobody likes Monday mornings and the weather outside right now definitely isn’t making it any better. Here in Boone we are seeing some underdeveloped snow this morning. The drive up from Charlotte this morning was not a nice one. It was quite different from my drive last week when it was snowing and the roads were covered in white.

In general, most of the ski areas in the region will see some light precipitation today. We’re not looking at any downpours or anything, but it definitely won’t be a great day to be outside. The precip will mainly be here in NC. The further north you go, the less likely you are to get wet.

Tomorrow looks dry and a brief return to sunshine is expected. I say brief because Wednesday will see heavier rain invade the region once again. This will continue into Thursday but don’t panic just yet because some big changes are in the forecast. Thursday night through the weekend looks AWESOME. The return of wintry weather is coming and even some natural snowfall is forecasted for Thursday night and into Friday. High temperatures over the weekend look to be in the teens and 20’s for some of the ski areas and everyone will see overnight lows dip below freezing, allowing for snowmaking to commence once again. Woo!

This is GREAT news as MLK weekend is basically the second busiest time of the winter for the ski areas. With the terrible weather and huge dropoff in skier visits over the Christmas holiday, the cold and snowy forecast for the end of the week is sure to be a welcome relief to the people running the resorts. So, if you have a vacation planned for this weekend, don’t cancel it! It will be cold and there will be PLENTY of snow.

Even better news is the long term forecast for the region. Many weather experts are starting to see signs that point toward us seeing a much colder second half of January and first half of February. I read an article last night that even used the term “historic” in the title when discussing the difference in weather possible between the first half and second half of winter. I think we are all crossing our fingers and hoping that this pans out as this winter has been pretty terrible thus far. It’s pretty crazy the difference compared to last year at this time. Take a look at the two pics below showing snowpack today and then on the same date last year. The difference is pretty dramatic. 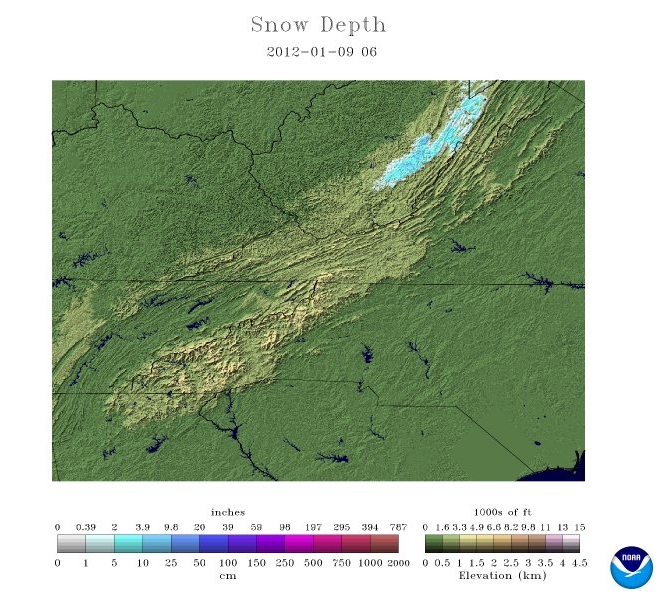 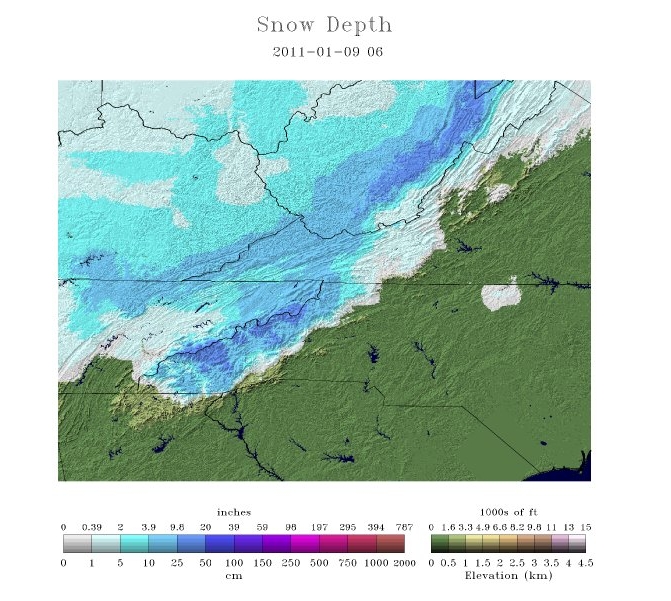 …And this is snow depth across the region on the exact same date last year.  Yeah, there’s a pretty drastic difference!

Like I said though, things look to be turning around starting this weekend…HOPEFULLY! As Mike mentioned yesterday, we are already a third of the way through the season. Here’s to a MUCH better second third!

Not much has changed at the resorts since yesterday. Base depths have dropped somewhat over the past 24 hours and there hasn’t been any snowmaking except for at Massanutten and Wintergreen. The temperatures at those spots this morning were in the 20’s and the cams were showing the guns going. Everyone else is in very similar condition to what they were yesterday. As has been the case all year, the ski areas farther north into West Virginia and Maryland are the best choice for skiing and riding in the region. Head on over to the ski report page for all the info pertaining to open trails and lifts and what not. See ya tomorrow!

Previous Post
An Awesome Night Shot from Winterplace on Sunday
Next Post
Some Fat Flakes Were Falling at Massanutten Yesterday!