A Mid-Week Influx of Cold is Almost Here 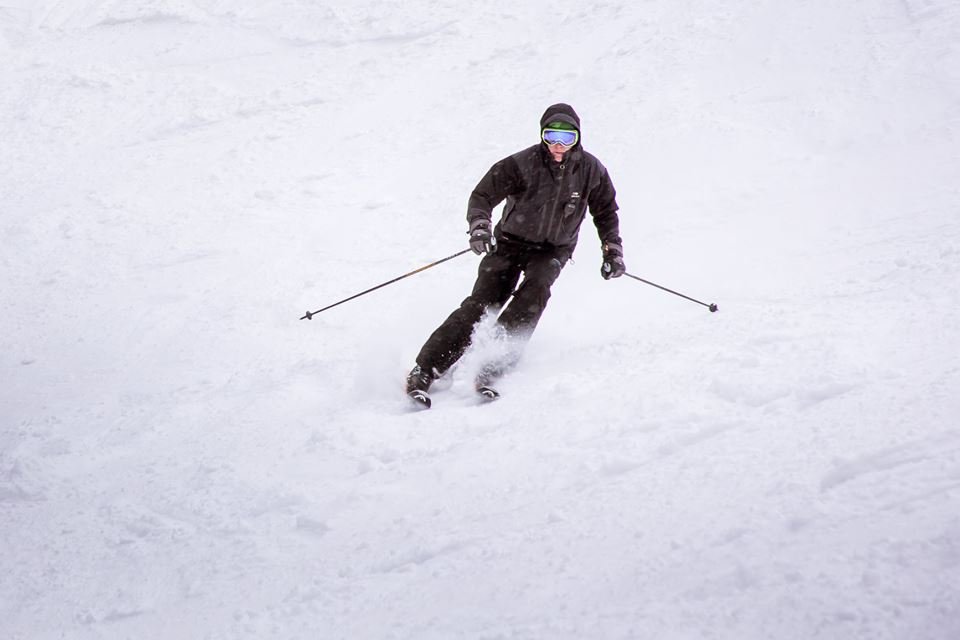 Temperatures are on the mild side once again this morning but the colder air is jusssssssssssst to our west and should filter into the region today.  It appears to have already begun to do so as Cataloochee, which is one of the western most resorts in the region, is the cold spot this morning with a temperature reading of 37 degrees.  Everyone else is generally in the upper 30’s and 40’s.  Needless to say, the snow will be soft again this morning.

We do have a few days of cold, and even a bit of snow, to look forward to though.  Brad Panovich sent us his latest video forecast and I’ll let him discuss some more.

It’s kind of a bittersweet forecast that we have right now in that we have some cold air returning but it’s followed by a mild up this weekend.  The next few days of cold doesn’t look quite as chilly as it did yesterday at this time, but the snow outlook for tonight and tomorrow is a little better.  It’s still a small event and limited to only a handful of resorts but it’s certainly better than nothing.  Below is the current thinking for snowfall from the NWS for tonight and tomorrow. 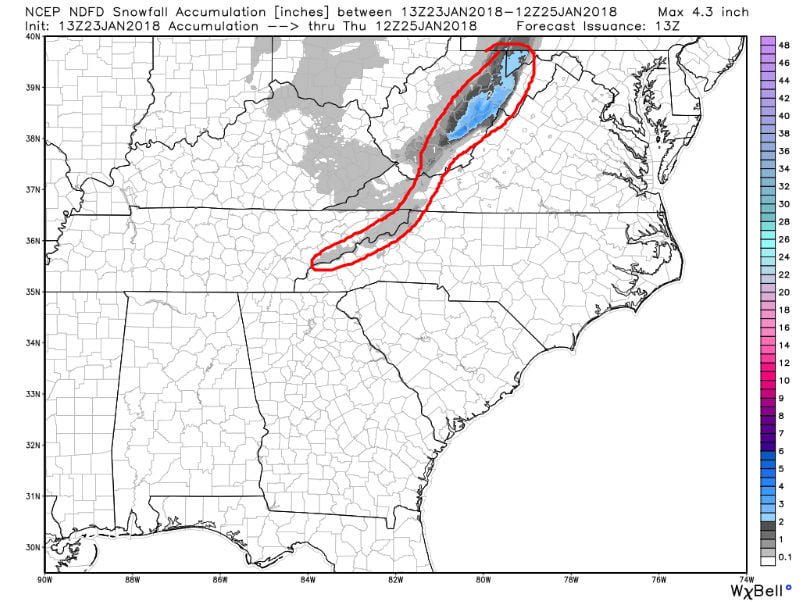 Like I said, it’s a very small event but 1-3″ for the northern West Virginia ski areas and Wisp in Maryland would be a nice little refresher.  Winterplace, Beech, and Sugar (and maybe Wolf?) would see less than that amount, but I’m sure they’ll be happy to see a dusting to an inch or so after the past few days of mildness.

The return of snowmaking is the main thing to focus on though as we will see several nights where the snow makers can do their thing.  I’m not convinced that everyone will be able to fire the guns back up again tonight, but there will be a good number of resorts who will have a fresh layer of man-made snow by tomorrow morning.  The vast majority of ski areas will be able to make snow on Wednesday and Thursday nights though before the snowmaking window closes as we go into the weekend.

As Brad talked about in his video, the weekend will indeed see the return of some milder air and in general the next few weeks doesn’t look like we’ll see a cold pattern get locked in.  The Southeastern weather roller coaster looks to be in full effect but there are some promising signs as we go into February.  My Twitter timeline was abuzz yesterday with weather folks mentioning how the long term model guidance was showing an extended cold pattern for a good part of the month.  Obviously stuff can change, but I just wanted to mention this so we don’t get any Debbie Downers talking bout the end of winter!

I’ve done a pretty terrible job so far this year of highlighting events here in the morning report.  I’m going to try and work on that and see if I can mention a few this week.  Today’s featured event is the 50th Anniversary Celebration at Beech Mountain Resort.  It’s taking place this weekend and there are a number of events/activities to take part in including live music, fireworks, a beer tap takeover (mmm), and a cardboard box derby.  Here’s what they are saying… 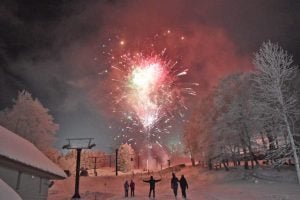 We kick off the celebration on Friday Jan. 26th, 2018 with live music from The Storks.

The Storks will play at Beech Mountain Brewing Co. starting at 6:30 p.m. The Storks are Beech Mountain’s favorite house band. The band is from Hilton Head, SC. Known for their reggae/ska infused style laying down covers & original music with its own distinct island vibe.

Austrian ski instructors came to Beech Mountain in 1967.  They taught lessons and helped shaped the culture of Beech Mountain Resort. To top off a day on the slopes, the Austrian instructors also musicians, played Tyrolean music during the Apres-Ski at the Beech Tree Bar and Grille.

Saturday, Jan. 27th we will continue the celebration with an opening performance from Foothills Oompah Band Beech Tree Bar & Grille!

On Saturday, test your strength and see if you are the master of the stein! Join Appalachian Mountain Brewery as they host a stein holding competition in the Beech Tree Bar & Grille at 4:00 p.m., registration will begin at 3:45 p.m. before the event. There are a limited number of participants, so come early!

The Storks will have another performance on Saturday at Beech Tree Bar & Grille at 6:30 p.m. to 9:30 p.m. The Storks will be followed up by fireworks and a late night DJ.

Mike and I are planning on doing a live broadcast out there on Friday morning (I think) to kick off the weekend.  We’ll then be making some turns all day long with the Appnet crew.  It should be a great day on the mountain.  Join us if you can!

Tomorrow’s report should be a little more upbeat as we’ll have some natural snow and snowmaking to talk about.  Check back then!

Previous Post
Ski Southeast Forecast for 1/22/2018: Midweek cold and snow for the Southeast.
Next Post
The Return of Snowmaking is Here for a Few Days