It just seems like the 2021- 2022 season began just a few days ago and it was actually a number of weeks as both Sugar and Cataloochee dropped the ropes on their slopes in the
middle of November.

This means we are about at the halfway point of the season, making it time for a mid-term update on the season.

Looking at my thermometer Saturday morning and seeing single digits for a temperature made me forget the 60 degree temperatures the region experienced around the first of the
year.

As it pertains to the weather situation so far this season, when you think about it, nothing really out of the ordinary has occurred so far. What I am referring to is the as usual, even
if you don’t like the weather you are currently experiencing in the southeast, just give it a few hours or a day or two, because it is going to change.

Yes, there was a point in the season when only two resorts (other than in the very beginning) were providing slopes open for skiing and snowboarding in the southeast.

However, temperatures quickly dropped giving resort operation teams a chance to crank up their snow making systems and cover the slopes again, allowing skiers and
snowboarders and yes, snowtubers to return to action.

One thing that was a bit unusual but not really surprising was the snow drought the region experienced into the first of the year. This doesn’t happen very often and as I have
mentioned in this space before, during my years at Snowshoe Mountain there was a year that we got more snow in May, than we did in November. While an early season snow drought is not something we haven’t experienced, being in single digits for the season through early January is not something you see every year, though.

Then wait for it and we did as Mother Nature stepped up and dumped snow throughout the southeast region. Most importantly though, not only has it snowed in the high
elevations, it has also snow in the metro areas that provide skiers and snowboarders to every resort. 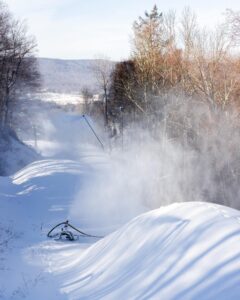 Seriously folks, it’s nice for it to snow at your favorite resort, but when the white stuff falls in cities like Charlotte, Roanoke, Washington, DC, etc., the web visits go off the charts and the resort operators have a hard time keeping up with the incoming calls. If flatlanders can feel, taste, touch snow in their backyard, they know without a doubt they can be skiing or snowboarding on it in just a couple of hours in most cases.

Switching gears a little here and just reminiscing a little bit now, this time last year, everyone was stilling trying to figure out how to deal with the rules and regulations the resorts had imposed to deal with COVID-19. Just the fact that there was some in the industry that didn’t think a season was even going to happen as late as September, last season turned out to be an extremely strong season.

Fast forward to this year, halfway through the season and we are still having to deal with the pandemic. The latest surge has some resorts instituting a “please” wear a mask while
indoors, unlike last year when in many cases it was mandatory.

What we haven’t seen this year as much is the restriction of daily ticket sales. I know of only one or two resorts limiting the number of lift tickets sold on busy days. That is something I think for the most part has gone by the way of snowblades.
One big difference this season over last is the drop in midweek visits. You can tell not as many folks are working from home these days. Remember last year, folks could head to
the mountains during the week, get work done remotely from their condos and get some skiing or snowboarding in at the same time. It looks like a lot of those folks are now making the daily commute to the office, instead of making a two or three day trip to their favorite ski resort.

With that thought in mind, don’t be surprised if resorts start making a marketing/promotional move to increase midweek business from now through the end of this season. I have heard from a couple of resort operators that, that is going to be the case. So, stay tuned.

From the ski shop side of the ski industry world, speaking to some of my contacts in that area, things for the most part have been a reverse in sales this season. It seems that last
year, soft goods, like jackets and pants went out the door first. This year it has been the other way around with hard goods, like skis and snowboards have departed the shops first.

The reasoning behind this according to my contacts is that due to the early season milder temperatures, no one saw the need for a new jacket, but a new snowboard was to their
likely. I am also hearing that getting delivery of certain soft goods this season for shop operators has been a challenge.

Really no surprise there, that’s for sure.

One thing for certain that hasn’t changed at all this season is the effectiveness of all of the resort’s snowboarders to recover after Mother Nature tosses them an inside curveball and
knocks them down in the batter’s box. Again this season, as soon as the temperatures dropped, the brown patches that everyone was seeing on the slope cameras, quickly
turned white.

Again, no surprise there, since we do have the best snowmakers in the country.

So, if I was going to give a grade for the season so far, I would say probably in the neighborhood of a B+ on the verge of being an A-.

That’s it for this week, thanks for joining me for my weekly turns on the laptop. Just remember whether it be cold or whether it be warm, we’ll weather the weather, whatever
the weather will be. See everybody on the slopes this season and make a few memories on me.