While I am thinking about it – Happy Birthday to my fellow, snow-loving friend, Joe Stevens of “Snow News is Good News”.

I’m thinking we will have some natural snow on the ground in a lot of locations for Christmas Day – hence a White Christmas may be on tap for a ski area near you.

As our own meteorologist, Brad Panovich forecasted, the models were not really predicting the 4-6″ of snow that has fallen so far as of this morning (8:19am), but he certainly did. Looking around the High Country and particularly at Banner Elk, and Beech Mountain about 6″ of snow has falling – and counting as Beech reported this morning. That 6″ has Beech Mountain leading the region’s ski area mountains from Maryland to North Carolina with 40.5″ on the season.

Our own Sugar Ski & Country Club snow reporter (not to be confused with Sugar Mountain Resort), reported, “Measuring 6″ on the Sugar stick this morning! Probably more like 8-10″ overnight. Hard to tell with the wind. We have 12-18″ drifts, man!”

Our man, David Lesher from up in Davis, West Virginia officially reported in with 4.1″ overnight and 29.9″ of snow on the season around Canaan Valley and Timberline.

We’re seeing a LOT of Packed Powder conditions as we head into the weekend! 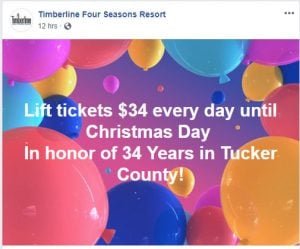 Timberline Resort – Let’s give Timberline some top billing today. It is 28° this morning and they have been making snow. They also received 4.1″ of natural snow and that takes them to 29.9″ on the season. THEY ARE OPEN!

We are giving Fred and Tracy Herz some much needed love this morning because as late as Friday evening everyone was betting against them being able to open. We’ll save the reporting about all of their struggles for another day, but as late as 7pm last night we were receiving emails and texts that Timberline would not get open.

They are open with 4 of 40 trails, but by gosh that’s open. They are playing on Crossroads, Timberline, White Out and Woods Hole for day sessions today. They are reporting a base of from 20-144″ but we left that 144″ off our snow report.

We have not received any comment from the staff at Timberline, but good on them. They did it.

Snowshoe Mountain Resort – Snowshoe gets our Photo of the Day today with this great shot of the Claus couple on the mountain. It is 22° and 3″ of natural being reported that takes them to 32″ of snowfall on the season (according to SkiSoutheast) and 26″ according to Snowshoe’s peeps. We keep being asked about Snowshoe reporting under what we do, but they don’t count snowfall until they drop the ropes on the season, whereas we report it from October 1st. Snowshoe is open year-round for a wealth of activities.

Snowshoe leads the region with 40 of 60 trails operating as well as tubing, snowmobiling, adventure treks and more.

Appalachian Ski Mountain 2″ of natural snow. They made snow and are open with 10 of 12 trails. Only Hard Core and Thin Slice are not open. 26.3″ on snow on the season.

We LOVED this photo of the snow globe that IS App at times and this time it was from mother nature dumping at the ski area.

ASM will again be open Christmas Day from 1-10pm! Purchase your ticket online before 12/25 for 1/2 price! This is no doubt the best Holiday Skiing value in the area.

Remember that Midnight Blast Nights will be going on every night from Dec 26-31.

Beech Mountain Resort – is reporting 4″ and counting while our mountaintop reporter sent us a report of a windblown 5″ of new, natural snow – taking Beech to 39.5” on the season.

They are open with 11 of 17 trails for today and tonight with more snow falling! Tubing and Ice Skating are falling as well!

(I will be heading up to Beech a bit later and may try to give you guys some LIVE video.

Bryce Resort – no new snow, nor snowmaking as the temps did not allow it, however they are open with 7 trails and plenty of good, side-to-side coverage for today. Bryce is reporting that they made snow, but we think they just have not update their report, unless they’ve found a way to do it at 40°.

Canaan Valley Resort – They got in on the natural snow with 4.1″ and 29.9″ on the season. My man, General Manager, Steve Drumheller reported that Canaan would be getting 6-8″ of snow before this system exits. They are open for day sessions today with 13 of 47 trails open on Packed Powder conditions. Our guy Justin Harris up their reported in, “The forecast is calling for 6 to 8 inches through Sunday, and conditions are looking outstanding for the holiday week. We are also beginning snowmaking operations today and will continue as long as weather permits. Santa and Mrs. Claus will be in our Hickory Dining Room this morning, and it looks to be a great winter day on the mountain! Enjoy the weekend everyone!”

Cataloochee Ski Area – Tammy reported 3″ of new snow and that takes Cat to 29.5″ on the season. They are open with 14 of 19 trails for day and night sessions as well as tubing.

Massanutten Resort – They are doing remarkably well to be open with 6 of 14 trails and 8 lanes of tubing with the moderate temps they’ve been dealt. It is 38° this morning which means no snowmaking and they did not see any of the natural snow either.

They shared, “The current forecast shows marginal snowmaking temperatures tonight and we’ll be ready to make snow as soon as temperatures allow. We will be skiing and riding from 9:00 am – 9:00 pm throughout the holidays (excluding December 24 & 25). Terrain park features set up on lower Nutten-To-It.”

Ober Gatlinburg – 29° and 2″ of natural snow! It was snowing so hard when I looked in around 3pm on Friday that it appeared they would get dumped on. However, we’ll all take that 2″ of natural and they made snow as well. They are open today and tonight with 3 of 10 trails open, terrain park setup and ice skating.

Ober reported in, “Good Morning! The Slopes are open from 9am-10pm today. We will open Cub Way, Lower Castle Run, and Ski school will be open with Lessons available starting at 9am. We received 2″ of New Natural Snow yesterday afternoon, while conditions remain steady from yesterday. With a base of 14″-18″ the primary surface is machine groomed. Ober Gatlinburg Freestyle Terrain Park has 4 features on the Skier’s right of Castle Run. We have officially entered our Holiday period which will continue through January 1, 2019. 3 days until Christmas!”

Sapphire Valley – They did see a TRACE of natural snow and will be open today with both slopes (2 of 2).

Wintergreen Resort – 30° – They and all of the Virginia ski resorts have had subpar temperatures to work with so far this season, which makes the fact that they have 9 of 25 trails open for day and night sessions all that more remarkable.

What a beautiful day for some skiing and snowboarding. The rain is gone, the ☀️ is out and conditions are great. We were able to reopen Sunrise this morning and snowmaking returns tonight. Come on up!

Winterplace Resort – 29° and 2″ of new, natural snow. They too have had to fight mother nature , ice storms and issues with electricity (due to those ice storms) but they are now kicking butt with 14 of 27 trails open for day and night sessions and tubing open as well.

Wisp Resort – 31° and 1″ of snowfall and 22.7″ on the season. They are playing with all sorts of fun adventures on their mountain today and tonight. 9 of 34 trails are open, snow tubing (truly one of if not the best snow tubing park in the region), mountain coastering, ice skating and more. 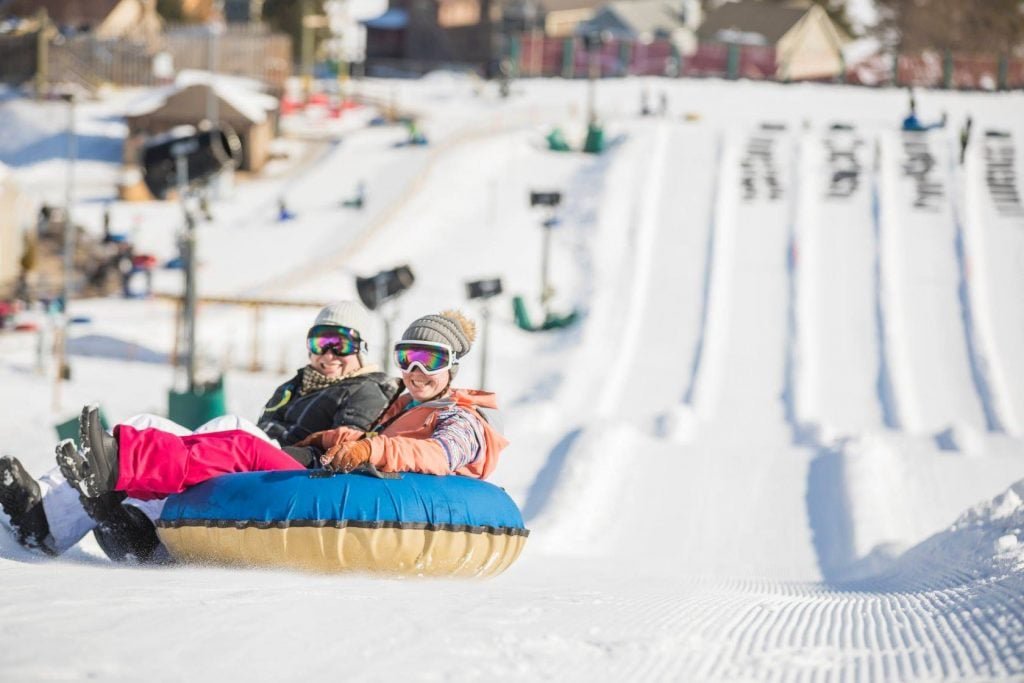 Omni Homestead Resort – we reported a couple of times this week that Omni postponed their opening until the cold air hits.