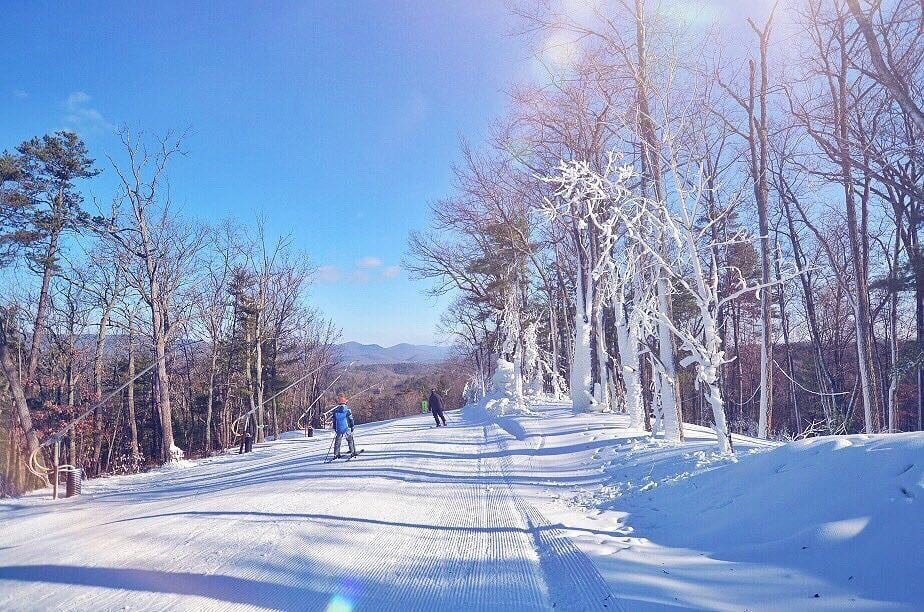 Meteorologist Brad Panovich posted his latest SkiSoutheast Skier’s Forecast and you know you’re going to like what you hear from Brad when he begins his forecast with a smile! We’ve seen a bit of a short-lived thaw that will have one more rainy and milder-than-desired day on Saturday. Colder air arrives Sunday with some light snowfall Christmas Eve and into Christmas (yes Virginia, we could see a light-white Christmas). However, that isn’t the cold and snow that has Brad (and the rest of us excited).

The bigger story with this next period of weather for us is the cold air according to Brad. We should see a little burst of natural snow, with the West Virginia resorts seeing 4-5″ worth of White Christmas. Obviously that and the cold air will have the ski areas bombing the trails with manmade powder from the best and highest tech snowmaking equipment found anywhere.

That is great news, but it still isn’t what has all of our juices flowing. Thursday/Friday into next Saturday and Sunday is shaping up to deliver a few rounds of snow with potentially heavy snow that would bring as much as a foot of snow across thew entire region.

I checked the forecast models for Banner Elk and Beech Mountain, as well as the rest of the NC, VA and WV mountains into Wisp Resort in Maryland and it is looking VERY SNOW and COLD from tomorrow (Sunday) all the way through next weekend!

We’ve been talking about the fact that the weather has been oddly “equitable” for all of our ski areas thus far this season and the next week is looking like more of the same with plentiful snow and cold temps.

From what we are seeing, these next three bursts of snowfall could deliver a foot or more of snow at the ski resort mountaintops over the next 7-8 days and that is like “manna from heaven” (literally) not only for the ski resort managers but for those of us who have trips planned for the all-important, Christmas-to-New-Year week ahead!

If you have a chance to head to the mountains, this next week will be one of the best Holiday ski weeks in memory. Reservations will be scare but we have a ton of lodging partners featured on our Trip Planners for all of the ski areas and of course many of the mountains have on-mountain lodging. If you are even considering a trip up – get on the phone or online and make those reservations right now.

I was speaking with Snowshoe’s Denise Chestnut the other day and she mentioned that they were “more than 100% booked”. Resorts will slightly overbook important weeks and weekends knowing that some will cancel their plans at the last moment either because of family issues, poor weather conditions or travel plans even when there is “too much snow”. According to Denise, “No one is cancelling!”

It should be an amazing week ahead with more cold and snow than we’ve seen for a Holiday ski week in a while! So get your gear and your rear to the mountains! It should be a magical week of skiing and snowboarding! (But first get on the phone and make those reservations!)

Wintergreen Resort posted a timelapse of their massive snowmaking capabilities. Check it out. It’s a timelapse like we’ve done a few times for various ski resorts, but it never gets old.

Check the SNOW REPORT for all of the particulars as the resorts ramp up snowmaking ops tomorrow. I heard from a good friend and huge Sugar Mountain fan yesterday that Gunther and his crew had positioned snowmaking equipment on Oma’s (the old Big Red slope) and that is great news for the Sugar Ski & Country Club visitors as that will allow those guests to do ski-in-ski-out next week if they can get enough snow there. (…and they no doubt will.)

Massanutten Resort is looking good right now with more cold and snow in forecast. However, this little reminder is that the ski areas have some really nice shops for buying those last minute Christmas gifts. Massanutten posted:

Stay warm and cozy as the temperatures drop with a knit beanie from Turtle Fur and a pair of UGGBailey Button shearling boots. Now available at The General Store! #ApresSki #WinterWishList #ShopMassanutten

They began offering night sessions last night and by all accounts it was awesome. They have 6 slopes and 8 tubing lanes open.

Appalachian Ski Mountain – Until a year or so ago Appalachian Ski Mtn was closed on Christmas day, however last year and now again this year they will be open from 1 to 10 p.m. on Monday, December 25. The day will serve as a fundraiser for Appalachian Ski Mtn’s ski patrol and customers who purchase their tickets online before Dec. 25 will receive a 50 percent discount! Go support their Ski Patrol and ski with Santa.

As I look around the region, we’re seeing really good coverage despite this short thaw and wet rains. Sure there is some “worn” spots here and there and base depths have dropped a couple of inches, but the resort crews are doing a great job of maintaining the slopes. Now that the cold and snow is headed our way, we can expect lots of snowy conditions and many more trails opening at your favorite ski area.

Snowshoe Mountain Resort – 36° – They continue to “lead the league” in open terrain with 143 acres covering 38 trails. It is a bit wet up there right now via the cams, but that will quickly change to SNOW!!!

Winterplace Resort – They have the second most slopes open in the region with 20 of 27 open for day and night session and snow tubing. Winterplace is also boasting a 48″ base.

Another great idea for snow lovers on your Christmas list: Winterplace posted:

Last minute Christmas shopping can be hard, but it doesn’t have to be! Winterplace Gift Cards are a perfect holiday gift for the whole family! Redeemable any time throughout the ski area including the Retail Shop, Lift Tickets, Equipment Rentals, Snow tubing and the food courts! Log on to https://www.winterplace.com/gift-ideas to purchase your Winterplace gift cards!

Canaan Valley Resort – They have some accommodations available and snow is in the forecast beginning this evening! Make your lodging and dining reservations today for New Year’s Eve. Live entertainment will feature Gabe Dixon and The Whiskey River Band in the Laurel Lounge (304) 866-4121.

Here’s an interesting tidbit – Canaan Valley has seen 22.1″ of snow so far and on TEN of the 23 days of December. (And we all know what is coming!) Make those travel plans today. (How many times do I have to say it!)

Wintergreen Resort – we talked about the amazing SNO POWER snowmaking system earlier and they did well with it ten days ago as they still have an 18″+ base and ten trails open as well as tubing.

Wisp Resort – They actually ADDED another open trail for today to get to 16 trails open as well as their snow tubing, ice skating, mountain coastering and more.

Cataloochee Ski Area – dropped 4 trails to save them for today and Tammy Brown reports, “Its going to be a great Christmas week here at Cataloochee, and our forecast is for much colder temperatures and some natural snow for the holidays! We have plenty of snow out on the hill and today we’re skiing on 12 out of 18 trails including our Cat Cage Terrain Park with three aerial lifts and two conveyor lifts operating with skiing from the top of the mountain down.”

Wolf Ridge Resort – They have 10 trails open and they are definitely feeling a different vibe over there right now. There is a revived excitement happening at The Wolf and part of it is the fact that conditions have really been good over there this early in the season. The other part is a knowledge that great things are to come in their very near future.

Also not certain if they have someone new posting comments on their site but they posted, “Its Saturday December 23nd and a great day to be at the Wolf. We have 10 runs open today with 3 lifts in full operation. The snow base is still over 40 inches average and up to 8 feet in some places. We are open to the top so make plans now to get here early and be the first to shred the snow.

Ober Gatlinburg – WOW it is 62° this morning at the Smoky Mountain ski resort and they’ve dropped their open slopes to 3 today, but cold and snow is on the way. Ober should be in great shape this week and there are tons of accommodations partners in our Trip Planners. Ober’s TRAM can take you from the downtown street to the resort in no time. We’re excited to be talking with Kate Barrido and the peeps at Ober about adding a couple of high rez, LIVE cams very soon. Could happen right after the first of the year!

Timberline Resort – We’ve received more than a few questions about the Davis, WV ski resort. They’ve definitely been going through some issues over the last few years and they are still weathering some this early in the season. Snow is plentiful and in fact last week they might have had the most snow on the slopes of any WV ski area. However, they have not been operating at full strength quite yet. They were closed the other day but now have Timberline Trail, Upper & Lower Salamander, Winterset Spur, Lower Almost Heaven, Woods Hole, Cross Roads & White Out all open for day sessions. They are running a bit behind right now and they are currently hiring servers, line cooks, bartenders, ticket checkers, lift attendants, ski patrol, vacation planners, group sales and retail professionals. Special spots available for digital marketing and payroll. Email them at [email protected]

So stay tuned for lots of snowy updates…