This is going to come off like a broken record, but boy howdy are people traveling in force right now! Much has been made of managing crowds and how everyone will need to do their part in wearing masks properly and trying to maintain distancing.

I made my own first turns of the season at Beech Mountain Resort this morning. I was there early and hit the mountain shortly after they cranked up the lifts and did laps until around 10:15am when the slopes became p-r-e-t-t-y busy.

Kenny Griffin posted a LIVE, Facebook feed and caught my first run. Check it out:

As I was leaving, I couldn’t help but notice that ALL THREE parking lots for the resort were FULL. …and it is Monday, December 21st, still a few days away from the madhouse rush that IS Christmas-to-New-Year Week!

Beech was already a packed house and people were parking down, off the resort area and walking up.

I have spoken to many industry insiders at all the ski areas of our region, and they’ve all shared larger-than-normal visitor numbers all summer and fall. That bodes well for the Winter as well and I have had “eyes and ears on” all of our mountain communities in the region. Numerous conversations with long-time advertising partners have revealed the same heavier-than-normal visitor traffic across the board.

However, I am not sure every ski area, mountain town is seeing the KIND OF traffic that we’re seeing in North Carolina and perhaps over in Gatlinburg in the Great Smoky Mountains. Hotels and cabin rentals have been largely booked solid all summer and fall, and from what I am hearing, a LOT of this winter is already booked out in areas like Blowing Rock, Maggie Valley, Banner Elk, Sugar & Beech mountain, and in close proximity to Ober Gatlinburg.

In all my years of hanging out in Banner Elk and Beech Mountain, I am not certain that I have seen THIS kind of traffic, THIS early in a ski season. Highways and byways are packed. Wineries are packed. …and now it appears the ski areas are also going to be packed. (At least so far and that is awesome news.)

Something to Keep An Eye On… 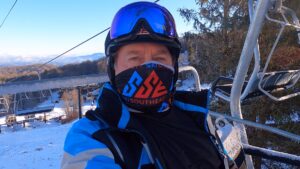 Crowds are awesome…most seasons. However, we are living in a world right now that is being immensely influenced by a pandemic. Crowds this season could be a “bad thing”…if people don’t cooperate. What we are going to have to keep an eye on is “how many eyes are on US in the snow sports industry?” – AND, “What are those eyes seeing?”

Governmental agencies have the power to yank the plug on our ski & snowboarding season if they deem either of a few of things:

If any of those questions are answered with a hint of a “no”, then we could have issues with ski areas in some states being able to stay open for the entire winter.

It appears that we are going to “get through” the important Christmas-to-New-Year Week. What then?

I was watching WNCN Newschannel 36 last night where a few Charlotte bars were catching heat as social media was “lit up” showing massive crowds in local bars, watching the Clemson/Notre Dame football game. Only a sporadic mask or two was seen in the entire crowd.

You can almost see the buzz of activity probably happening behind closed doors in NC Governor Roy Cooper’s office prepping to re-shut-down bars, etc. in the entire state after those viral videos showed up last Saturday and Sunday.

All of this is happening as the number of reported covid-19 cases rise state and nationwide.

Not Exactly VIRAL, but… 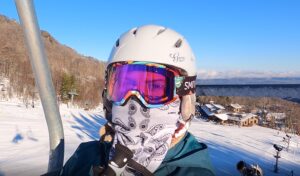 I have been receiving multiple emails daily from readers who have snapped up photos at various ski resorts in the region – showing many people in lift lines sans masks. I don’t feel it is fair for us to post those sorts of photos, so they are deleted as quickly as they come in. We have 16 ski areas in the Southeast & mid-Atlantic and I don’t think it’s fair and equitable for us to share photos from three or four resorts, when people at every resort are failing to cooperate.

I was at Beech today and I only made seven laps up and down the mountain. Upon every visit to the chairlift, there were several people in line either with no mask, or a mask that was not pulled up. On one of my trips in line, I said out loud for all to hear, “Hey guys,  mask-up or we won’t have a ski season.” 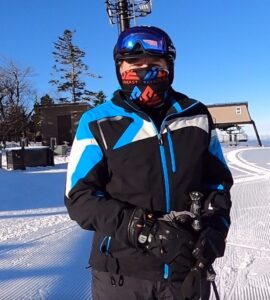 I really don’t want to BE “That Guy”.

A few people turned and looked at me and all of them pulled their masks up. (A) I’m a big guy, (B) I was wearing a SkiSoutheast Gaitor (with another face mask under it), (C) I was wearing a blue & black ski jacket that COULD be mistaken for a Beech Mountain jacket – and people cooperated.

Another trip to the lift line and I ended up right behind a woman and child. The child was wearing a mask. The woman/mom was not.  I kindly mentioned, “Mam, mask up please.”

She looked at me and replied, “It is in my pocket.”

O-k-a-y… I guess that means it is protecting her and everyone around her by some sort of wireless magic.

Look, I know everyone hates someone who minds other people’s business.  I get it. Typically I am ALL ABOUT minding my own business and allowing idiots to be idiots. Besides, no matter how “big” I might be, there are always bigger and meaner peeps and I don’t want my butt whipped. I’m been in a number of fights in my time and all of those were SO forty years ago! I’m not looking for a fight these day.

Another truth to share is – that I am personally not losing one bit of sleep about whether I get covid, because I frankly have thoughts about the whole thing that are not all that popular. Before I catch more hell than deserved, I KNOW it is real. I KNOW it is to be respected. I’ll leave it there.

However, regardless of how I or anyone else feels, the FACTS are that governmental agencies are watching the numbers. If they deem that skiers, snowboarders and those in the business of providing us with slopes to play on – are not able to cooperate with the “Ski Well, Be Well” protocols, we could see a PAUSE or STOPPAGE of this ski season.

It should be stated that I have heard from several readers who have shared things like:

“Mike, I was visiting [redacted resort] and I heard lift operators kind of ‘singing’, “If you don’t wear your mask over your nose, the Governor will make us close.”

“Hey I was at [redacted resort] yesterday and I saw ski patrol telling people in line to pull their masks up and they would do it, and once the patrol left they would pull them back down.”

“So many people in line at [redacted resort] were not wearing masks yesterday. I don’t know how resorts will be able to enforce it.”

“Is it really safe to be in lift lines and 5-10% of the people in those lines are not wearing masks? I have been on the snow eight days this season and every single day I see maskless people.” 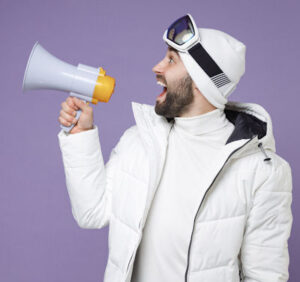 If resorts ARE to make it through the season, you almost wonder if each resort will have to hire and assign a person to police each lift line and constantly be barking orders to “mask-up”.

Maybe it will take pulling lift passes to make it stick.

Otherwise, will ski season make it to the end of March.

Crowds are great. Love to see them this early. The question is, “CAN RESORTS MAKE PEOPLE COOPERATE?”

Feel free to email me, but be nice. [email protected]