March Madness Indeed! The Weather Pattern at the Southeast’s Ski Resorts has Resembled January until today… 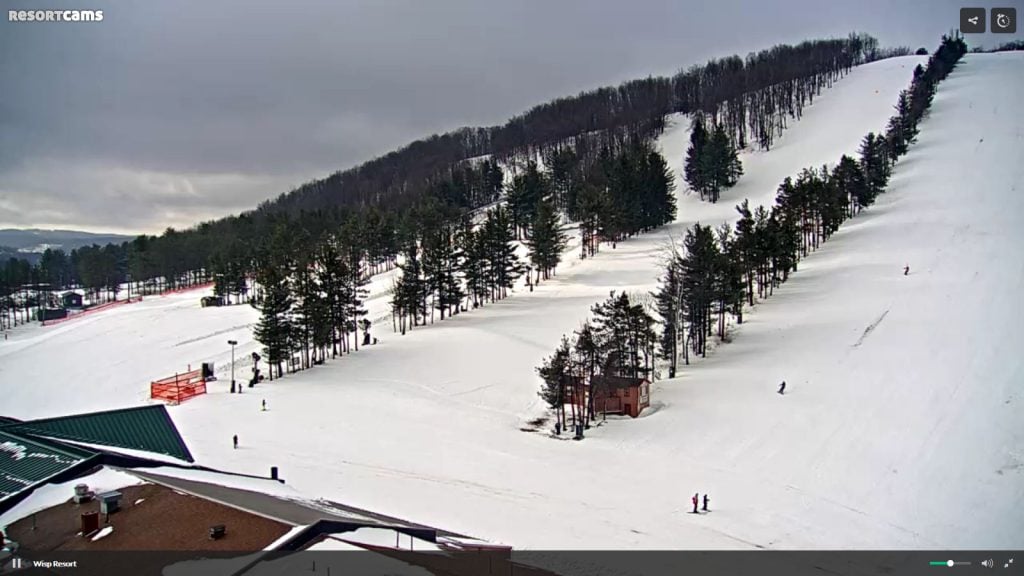 Kudos to Kenny Griffin for his day-to-day coverage of this past week as he reported on the transition from not-so-stellar conditions across the region — to amazing, mid-season, January-like conditions since the latest named snowstorm (that really does kill me that THE WEATHER CHANNEL has to name every significant storm of any kind) dumped tons of snow on every mountain in the southeast and mid-Atlantic.

The title of this mountain blog this morning obviously has ties to NCAA Basketball Tourney that is going on right now. However, it could also sum up the general sentiment of every mountain ops and management crew at every ski resort in the region.

I have personally never seen so many resorts OFFICIALLY close for the season and then reopen again. Closing temporarily is something that happens to nearly every ski area once or two during a typical prolonged thaw period in the midst of a sub-par season. However, closing for the season is something that pretty much tells the fans of your resort that you are DONE for the season. It tells them to “move on” to other ski areas for your snow fix or to begin thinking about golf, tennis or whatever Spring projects you have planned around home, etc.

This season has been truly a maddening one to say the least.

I will begin my “notables” with the maddening news that Wisp Resort DID CLOSE for the season and yet they ARE OPEN today with 5 trails and snow tubing. We’ll see how many show up to take advantage of the great conditions. It DOES look sweet out there. I have planned to visit Wisp in each of the past two seasons and didn’t make it there. I have got to make that happen next season as Wisp is an awesome place to play. I just really love Garrett County and Deep Creek Lake in general.

As of 9:30am there are not MANY taking advantage of the Wisp slopes…

I’m going NEXT to Cataloochee Ski Area as they will undoubtedly win “ski resort middle-weight fighting champion of the year award” as they have fought mother nature at every turn this entire season. The wildfires that dotted the Western North Carolina mountains early in the season were caused by a severe drought in that area and that same drought caused Cataloochee to not be able to make snow at some of the most crucial times of the early season. When they finally COULD make snow, the temps often did not allow them to. However, here they are not only fighting the good fight, they are open with 7 slopes and trails and boast that they will ski and ride on until March 26th. TAKE THAT MA NATURE!

Winterplace is beginning to look a bit narrower than mid season form, but you wouldn’t know it by the trail count which is boasting 23 of 27 trails available as well as tubing. The snow looks pretty soft there this morning.

Wintergreen Resort is open with 11 slopes and trails for at least this weekend. Slopes closed March 20-24 with the possibility of reopening March 25.

Massanutten Resort is open today and Sunday with 5 slopes and they WILL close for the season after Sunday’s sessions.

Bryce Resort is open from 10-2pm (not sure why others don’t do that this time of year when very few people will be on the mountain before and after that time) with THREE slopes.

Man, I don’t know if the heavy rains hit every mountaintop over night, but good Lord the rain bombed here at my house overnight and it looks like it might have at Sugar Mountain Resort as well – as Gunther’s crew dropped their reported base 5-7″ overnight. Nevertheless they are open with 9 of 21 slopes and they are self-reporting some thin coverage and bare spots.

Talk about “March Madness” – I cannot remember a season when Sugar operated with 10 or less trails open for most of the season.

March Maddening….even more…after Sugar saw a 7″ drop in base, there IS a chance for SNOW tonight. Despite that – don’t be surprised if Sugar closes after Sunday’s sessions. This is ONLY an opinion and not an announcement.

Cataloochee Ski Area must have ALSO seen some significant rain in the last 24 hours and TRUST ME – they need it. In fact we all do as most of the High Country was enveloped in SMOKE on Friday as there was a large (75 acres) wildfire in the Linville Gorge area. Hopefully the heavy rains hit there as well.

Appalachian Ski Mountain also reported a huge 7″ drop in base – but they still have 37-48″ reported and 9 of 12 slopes open. Tonight is their last night skiing session.

Appalachian is also offering a special for any passholder of any Southeast ski area. Present your season pass to any Southeast resort at our Main Office, and ski or ride any day or night for the rest of the season for only $20!

App’s closing date is next Sunday and they should make that no problem, so you have a week and a half to take advantage of this deal!

Beech Mountain Resort is open with 9 of 17 trails available.

We’ll wrap up today’s notables with the resort which has had the most notable season. Snowshoe Mountain. When other ski areas are closing and dropping open trails – Snowshoe ADDED another open slope to get their count to 52 of 57 trails available for today. They have Silver Creek open and tubing is open as well.

Lower Ballhooter is closed for Pond Skim today, so be sure to take part in this Snowshoe classic. Spectators can watch from the bottom of Whiffletree or take a bus, which leaves the village at 1:30 p.m., to the Boathouse.\

Congrats to all of the first round winners in the NCAAs – including my Gamecocks who FINALLY won an NCAA tournament game for the first time in 44 YEARS! They beat Marquette late last night 93-73 and next face Duke on Sunday night. Oh well, it was nice to break that drought anyway.

I’m feeling a bit mellow this morning and simply want to honor my younger brother who passed away four years ago. His daughter, Katie was born on St. Patrick’s Day.

Yesterday was St. Katie’s Day in my household in honor of my niece who was born on the 17th – 34 years ago with severe hydrocephalus well prior to medical advances in the treatment of it. We were told she would be blessed to “make it” into her teens. We’ve been blessed a lot longer. So Happy Birthday a day late St. Katie!

That will do it for me today. Email me if you like at [email protected]

By the way – thanks to all of you who have been emailing me a good bit lately. Keep those emails coming!