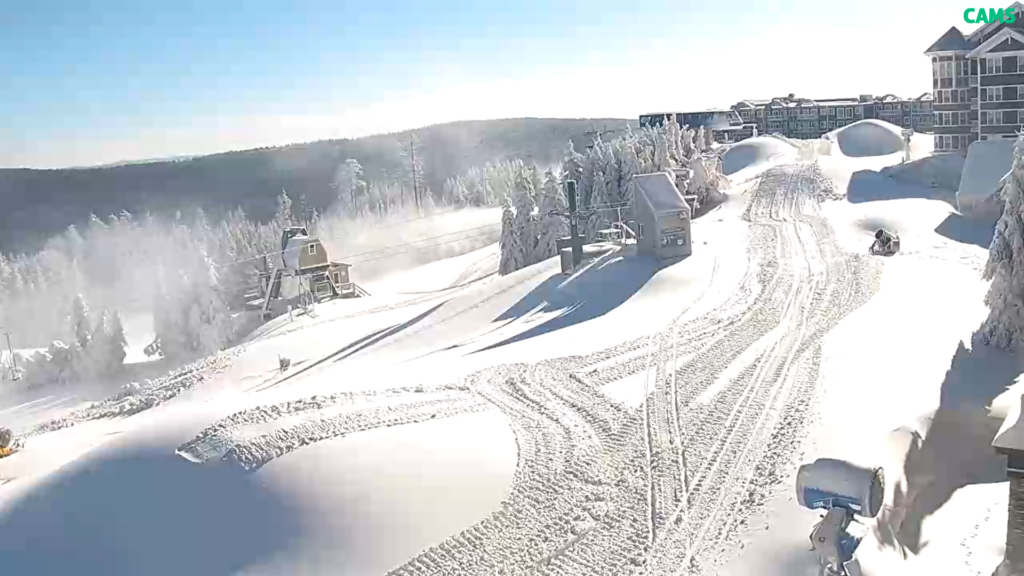 The major weather news of the east coast is the massive, historic, lake-effect snowfall that has dumped several FEET of snow in upper New York. They have driving bans and as much as two feet MORE snow in their forecast. A few readers hit me up this morning about “how nice it would have been for us to have gotten that dumping here in the southeast and mid-Atlantic. Ummmm…no. We’re always up for a foot or two of snowfall here in the mountains, but anything more than that makes it tough for people to get here to play.

By the way, as I was compiling this morning’s report, I DID see some light snow falling around Wisp Resort, Canaan, Timberline and Snowshoe. Canaan’s David Lesher reported 2.2″ of snowfall overnight and almost 3″ in the last 30+/- hours.

As I was putting the finishing touches on this post I heard “Megan” of WCNC Newschannel 36 in Charlotte mention that Appalachian Ski Mountain was open this morning (and they were nice enough to show our LIVE RESORT CAM) but THEN she said, “They are open with FAKE SNOW, but they are open.”

That is NOT FAKE SNOW. Fake snow is what you buy in a bag and decorate on or under your Christmas tree with. The snow that our ski areas blast the slopes with is REAL SNOW. It is just MANMADE snow. They create it by blasting water up into the cold air and it falls to earth (and on the slopes) as REAL SNOW.

The photo of the day up top is of REAL, MANMADE SNOW at Snowshoe Mountain this morning from the new Skidder Cam. Notice the FAKE WHALES that are being built up to push around in time for a GREAT opening day next Wednesday!

Check out these timelapse vids that our own Kenny Griffin compiled for us.

This first one shows the Town of Beech Mountain sledding hill where we caught the whole “kitchen sink” of weather from frigid to rain and back to frigid.

Let’s get to the snow report and first talk about which resorts are OPEN today and then report the latest for the rest.

APPALACHIAN SKI MOUNTAIN
They opened on Friday and today will be an awesome day on the 7 slopes and trails that are open today AND tonight as they will ski and snowboard until midnight! App Ski Mountain’s slopes look like they are in mid-season form already.

*** One semi-negative comment. We wish App would not report manmade snow as NEW SNOW on their snow report. We’ve had people email us asking why WE were not reporting the 4″ that fell. That’s because it didn’t. Appalachian and the Blowing Rock area has seen about 0.5″ of natural snow so far this season.

Snow tubing, one of the resort’s most popular amenities, now has all-weather snowmaking. Latitude 90 is an enclosed refrigerated snowmaking system, so the outside temperature has little effect on snow production. This new technology extends the tubing season and allows the implementation of pre-booking.

As a part of a multi-year snowmaking upgrade project, ten new SMI automated fan guns are joining the fleet, bringing the overall fan gun total to 93.

Other additions on the slopes include an enhanced terrain park in Powder Bowl, a beginner park in Meadows with new LED lights, and upgrades to Lift 7, servicing West Bowl, formally known as Oz Run.

CATALOOCHEE SKI AREA
Cat is open with a nice base of 18-23″ and 7 slopes and trails. They are open for day skiing only today.

After a successful test, our team geared up for a productive Thursday night. Snow was made up top all the way down Red Eye and on parts of Bootlegger. We laid down almost a foot up top. Temps are expected to drop even lower through the weekend so we anticipate more productive nights ahead. We will continue to pump out snow whenever we have the chance with the hopes of being open by Thanksgiving.

CANAAN VALLEY RESORT
2.2″ of natural snow overnight and 6.3″ in the last two weeks! Tubing is getting ready to open and the slopes will be ready sooner than usual.

MASSANUTTEN RESORT
They began making snow late on Thursday and they are blasting the slopes and will make an opening announcement as soon as possible. Opening day remains TBD, stay tuned to this page for opening day announcement.

Season Passes are on sale now and available for pick up in the ski office from 9:00am – 2:00pm daily.

OBER MOUNTAIN (FORMERLY OBER GATLINBURG)
They began making snow across much of their mountain and antipate opening for skiing and snowboarding by mid-December. The snowtubing hill looks to readying to open TODAY although they are not reporting that yet. Ober DOES have their amazing ice rink and mountain coaster open!

SAPPHIRE VALLEY RESORT
There’s been no snowmaking so far. The “white stuff” in the photo below is gravel. Typically, Sapphire Valley opens right before Christmas.

SNOWSHOE MOUNTAIN
They will open for the season Wednesday, November 23rd (the day before Thanksgiving) with some amazing, opening day conditions. They made snow again last night and this morning and they also picked up 0.5″ of natural snow. NWS officially calling it a TRACE.

EVER WONDER HOW MUCH SNOW OUR RESORTS CAN MAKE IN A SHORT WINDOW?

Snowshoe reports: Our snowmakers could cover an entire football field with 27 feet of snow in just 12 hours. Pretty wild right? We’re just days away from kicking off the season and the mountain is looking the part…

Timberline announced:
Sneak Peek Day
All that turkey won’t be the only reason you’re tired on Thanksgiving! Timberline Mountain is opening for a Sneak Peek Day on Wednesday, November 23rd from 12pm-4:30pm!

The mountain will suspend operations November 24th for Thanksgiving Day.

WINTERGREEN RESORT
They are making snow and prepping to announce an opening date asap.

WINTERPLACE RESORT
They are making snow and prepping to announce an opening date asap.

Email your thoughts at [email protected]