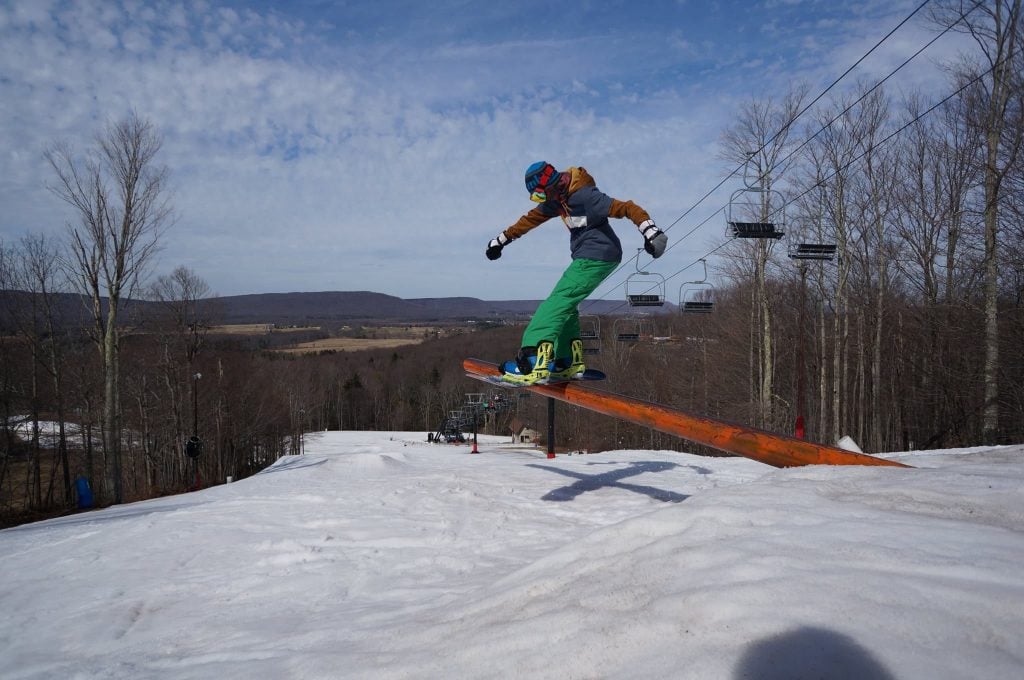 As I was about to leave my home this morning I heard the local Charlotte television station reporter stating that it was going to reach 80° there today. The first thought that entered my mind was, ‘Oh well, there goes the season.’

I HATE to LOVE this time of year. Part of me knows that these first mid-70s and 80° days will flip a mental switch in even some of the most die-hard skiers and snowboarders. Even some of you who live and breathe each ski and snowboarding season will almost immediately switch over to golf, tennis, and other warmer air outdoor adventures.

I was visiting with a friend on Sunday who has been in the ski industry for longer than a lot of you who are reading this have been living and while it was bombing snow at Snowshoe Sunday morning he shared, “Mike man the next couple of weeks are looking really warm and I have already switched my brain over to golf and white-water.”

As I said – I HATE to love this time of year because here I am, kind of an unofficial ‘spokesperson’ for the industry and I’ll admit that seeing temps like 54° at Wisp this morning and the mention of an 80° afternoon off the mountain has me catching a heavy dose of “Spring Fever”. Yesterday I was already doing some mental planning for getting some deck work done, sanding on my boat and trying to see when I could get a buddy of mine to hit the tennis courts with me.

Another thought that crept into my head was that this past Sunday’s ski session for me – might possibly have been my last for the season. That’s JUST Spring Fever talking because I have to believe that I’ll get one or two more visits to Beech, Sugar or App in before March 27th. However that’s how the warm weather effects even those of us who look forward to squeezing every ounce out of every ski season. So imagine how it is for those who only attempt to get in 1-3 visits a season.

I can assure you that people off the mountain such as in Charlotte, D.C., Nashville, Charlottesville, Atlanta and all other top cities that we see traffic from are thinking about just about anything other than skiing and snowboarding.

Our traffic on SkiSoutheast literally dropped 70% from this past weekend’s cold temps to this week. We’re now seeing a fraction of the traffic that we normally see during the peak weeks of each season. To make matters worse, I looked back at this date (March 8th, 2015) and yesterday’s traffic was literally LESS than ONE-HALF of the traffic we saw last season at this time.

I’m afraid that this season’s weather has really played havoc with a large part of our typically avid/rabid cold-weather audience.

It is what it is as they say. I was speaking with Snowshoe’s President, Frank DeBerry on Saturday evening and I asked him about how this season will rank in terms of skier visits and he made no attempts to “sugar-coat” things. He said, “There’s just no way to make up for what was lost with the poor start. November and December were simply terrible and losing the Holiday week…” His voice tailed off. Then he added, “There’s just no way to make up for that.”

While on the subject of Snowshoe, they DO have a HUGE event this coming weekend. They are now just T minus 2 days and counting until the best mountain-top, spring break throw-down you’re ever gonna see! I don’t know if you guys and gals have ever attended one of these things, but I and my family kind of inadvertently did one season and I can tell you that the mountain is full of some fun-loving, exuberant souls. Guard your kids and hide your women. (Okay it isn’t THAT crazy…but it does have a real Mardi Gras feel to it.)

It’s ALL About the Base…

Even though our traffic has taken a nose-dive over the past week or so, those who ARE visiting (about 7000 yesterday) are inquiring about HOW LONG we think things will last. Oglebay and Sapphire Valley are already closed for the season. Wolf Ridge is closed this week and planning to play this weekend. Snowshoe told me this past weekend that they have a hard date to close for ski and snowboarding ops on March 27th. Most ski areas are closing March 20th and some will call it quits this Sunday, March 13th.

As to HOW LONG each and every ski area will operate – I would advise you guys to keep checking our SNOW REPORT page as we’ll what we know, the moment we know it. Ski areas will operate as long as skier interest is there. It is more about skier visits than the weather or a lack of snow.

There’s no question that this mild stretch that we’re in right now will play havoc with “skier interest” as well as base depths. We’re seeing upper 60s and lows in the 40s through March 23rd – so we DO think that we might have seen our last cold weekend and snow THIS PAST WEEKEND.

Sure, we might see something late in the month, but that’s looking like a long-shot right now, so we’re expecting Spring Fever to really take hold of our collective psyche.

Thankfully the ski resorts were able to make a ton of snow while it was cold or else we’d be looking at a finish to this season that sadly would mirror the beginning stretch of weather. There IS a lot of snow on the slopes and instead of talking slopes and trails (check the SNOW REPORT for that) we’re talking base depths.

Here’s the latest from the region:

Wintergreen Resort – 18-42″ – Good grief it is 55° this morning at 7:54am! They plan to ski and ride until March 20th, then close for the following week and they will take a look at POSSIBLY reopening for that last weekend in March.

Wolf Ridge Resort is closed this week and plans to open this weekend for day sessions.

Not That it Makes it Any Better, but We’re Not Alone…

I was reading some material that my buddy Joe Stevens sent me about ski area news. Several ski areas in Vermont were recently interviewed about this season and the conditions.

After last year’s prodigious snows and record winter sports season, “this is a year of survival,” said Mike Miller, who has been at the helm of Mountain Meadows ski touring center in Killington for 28 years. He has had virtually no trails open this winter.

Can he remember a worse year? “Never,” Miller said. “It’s the worst.”

Actually, on his blog, Sugarbush President and Owner Win Smith wrote: “Has this been the worst snow year ever?  It certainly seems so. In reviewing our historical records, I discovered that there have actually been three worse years. As of the last day of February we have received only 117” of natural snow. However, the winters of ‘73/’74, ‘79/’80 and ‘83/’84 were even sparser.”

Again…it IS what it IS….

Previous Post
Time to Get Your Goggle Tan On
Next Post
A Photo from Wisp’s “BlackStrap Rail Jam Series Finale, Saturday, March 5th”