LOTS OF SUN AND SNOW OUT THERE! 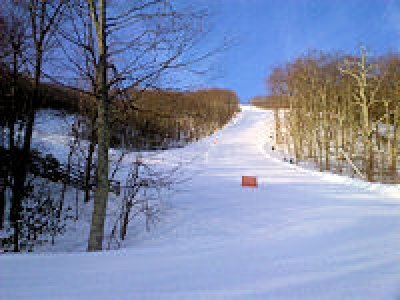 Yesterday had to be one sweet day to be on the slopes. I was "doing laps" around the High Country for the Round Ball Tournament that the area was hosting for regionwide basketball teams and at one point around 4pm I saw 58°. It probably got to around 50° at Sugar and Beech…and with all that sunshine there are probably a lot of red faces this morning. The sun will do a number on you while skiing and riding the slopes if you're not wearing sunscreen.

That was Saturday and according to the forecast for today…we should see more of the same with temps reaching into the mid 50s…again. It won't surprise me if 60° isn't reached.

THIS is the time when the uninformed begin thinking about tennis and golf because, "there just can't be anymore snow up there in the mountains". It is for those reasons that resorts close up when they do each season. Most years, resorts close for a lack of skiers and snowboarders and NOT for a lack of snow. While that may not have been the case the last two seasons when Spring hit earlier…right now we're seeing ski areas like Appalachian Ski Mountain which is boasting a base of 56-100" witnessing a "throttle down" of skier visits on the mountain.  Don't get me wrong, there were a LOT of people on the mountain on Saturday at ALL of the ski areas around the region, but you could visibly see the difference in the number of people on the mountain without going over to the ticket office and counting receipts.

Ditto that "throttle down" of visits to this website. Peak "NUMBERS SEASON" is definately from the few days prior to Christmas through President's Day Weekend and that held up well this season. Actually we're still seeing very strong traffic on the slopes…just noticeably less than last weekend.

With the kind of temperatures we're experiencing right now, there is no question that visitor numbers will dip going into these last couple to few weeks. Of course that COULD change with some timely snow like we had this past week. Nothing like the storm that dumped two feet of snow on parts of the Southeast and Mid Atlantic this past week is on the forecast horizon although we DO have some Wednesday to Thursday COLD and light snow potential that could make it into the news around mid week.

Making it into the news is helpful to us in the sense that when meteorologists down in Charlotte and Atlanta talk about "Snow in the Mountains" people do tend to migrate north for a quick snow/ski/snowboarding trip.  Thanks to those weather peeps who talk us up. I'm not thinking that we can really put a measuring stick on how many skier visits that meteorologists create by sharing the snow news up this way each year. I'm not certain that there's been any "economic impact study" on how much business that television weather peeps create to the mountain communities of the Southeast and Mid Atlantic.  Maybe Brad Panovich, Al Conklin, Matthew East and others could apply for Tourism Grant money!

Since a LOT of people start asking us about the snow and closing dates, we thought we'd inform you with a quick glance at Temps this morning at 8am; "Who's Got What" in terms of snow base, slopes open and the closing dates that we're aware of right now.

BEECH MOUNTAIN: 42° – 44-84" – 100% Open – Beech has not adjusted their base depth since the heavy snow this week and it's probably dropped 4-6" or so. That's STILL a lot of snow! As per a closing date, there's been no formal annnouncement and we're thinking that Beech will ride until March 24th, but they've been known to close a week or two earlier than App, Cataloochee and Sugar so we could see Beech pulling the plug a little sooner than the 24th. However you could also see them doing something that they haven't done before and stay open later. We'll keep you posted.

SAPPHIRE: Is Already Closed for the Season

SUGAR MOUNTAIN: 36° – 39-89" – 100% Open – Sugar nevers talks about a closing date until literally a couple of days before pulling the plug. The reason is simple – they don't WANT to close…ever. So they'll watch the temps and the forecast and only pull the plug on the season when they have to. However we CAN tell you that Sugar is hosting their "Easter Egg Hunt on the slopes", next Sunday, March 17th – a FULL TWO WEEKS BEFORE EASTER which falls on March 31st this season. However that is probably more to do with the fact that they want to do the egg hunt when they KNOW that there would be good snow still on the slopes…rather than chance it two weeks later. We think that a logical closing date for Sugar will be March 31st…but they could surprise us and lock it down March 24th.

WOLF RIDGE: 38° – 20-30" – 9 of 22 – Wolf caught some grief last week from Wolf lovers who could not believe that they were closed during and after the snow storm of this past week. I'm certain that owner, Orville English has NO CLUE that the managers-who-want-to-be-owners have a Facebook page off of "the other Wolf Ridge Resort" website (www.WolfNC.com) that shows several disparaging remarks about Wolf being CLOSED all this past week. Evidently they are not quite "in the know" about the Facebook page and that people actually visit it, etc. View that at: http://www.facebook.com/WolfRidgeResort/posts/339639116136933

With that in mind, I'd say that Wolf could CLOSE FOR THE SEASON after today's sessions. We've gotten a lot of emails asking us if they will be open this week or next. I'd bet that they will CLOSE after today's DAY SESSION and stay closed through the week and they would probably OPEN next weekend for Saturday and Sunday and pull the plug on the season on March 17th as Wolf usually closes earlier than the rest of the resorts. I had to chuckle at a few of the Facebook comments about Wolf being closed with snow drifts measuring 24".

BRYCE RESORT: 30° – 42" – 100% Open – After picking up 15" of snow this past week, Bryce extended their "night session season" through last night and they are open for DAY SESSIONS only today. There's no word yet on a closing date.

MASSANUTTEN: 43° – 45" – 100% Open – "The Nut" got dumped on with snow and they are in awesome "Super Spring" shape according to their own words this morning. They are open for DAY SESSIONS today and probably will remain open through March 24th-31st. We'll get word and pass that along this week.

CANAAN VALLEY: 35° – 24-48" – 100% Open – No word yet on a close date. With 33" of snowfall in March and with YESTERDAY being the first day in March without measureable snowfall…would you close? Ever? Of course Canaan will be and we'll get you guys that date asap. Conditions are AWESOME RIGHT NOW!

SNOWSHOE MOUNTAIN: 39° – 30-52" – 59 of 60 Slopes – Snowshoe has announced that they will ski through March 31st. Snowshoe has seen 15" of snow in the last 7 days and 151" on the season (which is below their 180" annual snowfall) and conditions are AWESOME right now. Snowshoe HAS extended their season before into April…so don't be surprised if they do it again…and that certainly could happen with more cold and snow.

That's going to do it for me today. Have a sweet one on or off the slopes. There's still little pockets of snow on the ground around the highest elevations of North Carolina and of course more snow on the ground up in West Virginia. Go play in it or on it while you can.